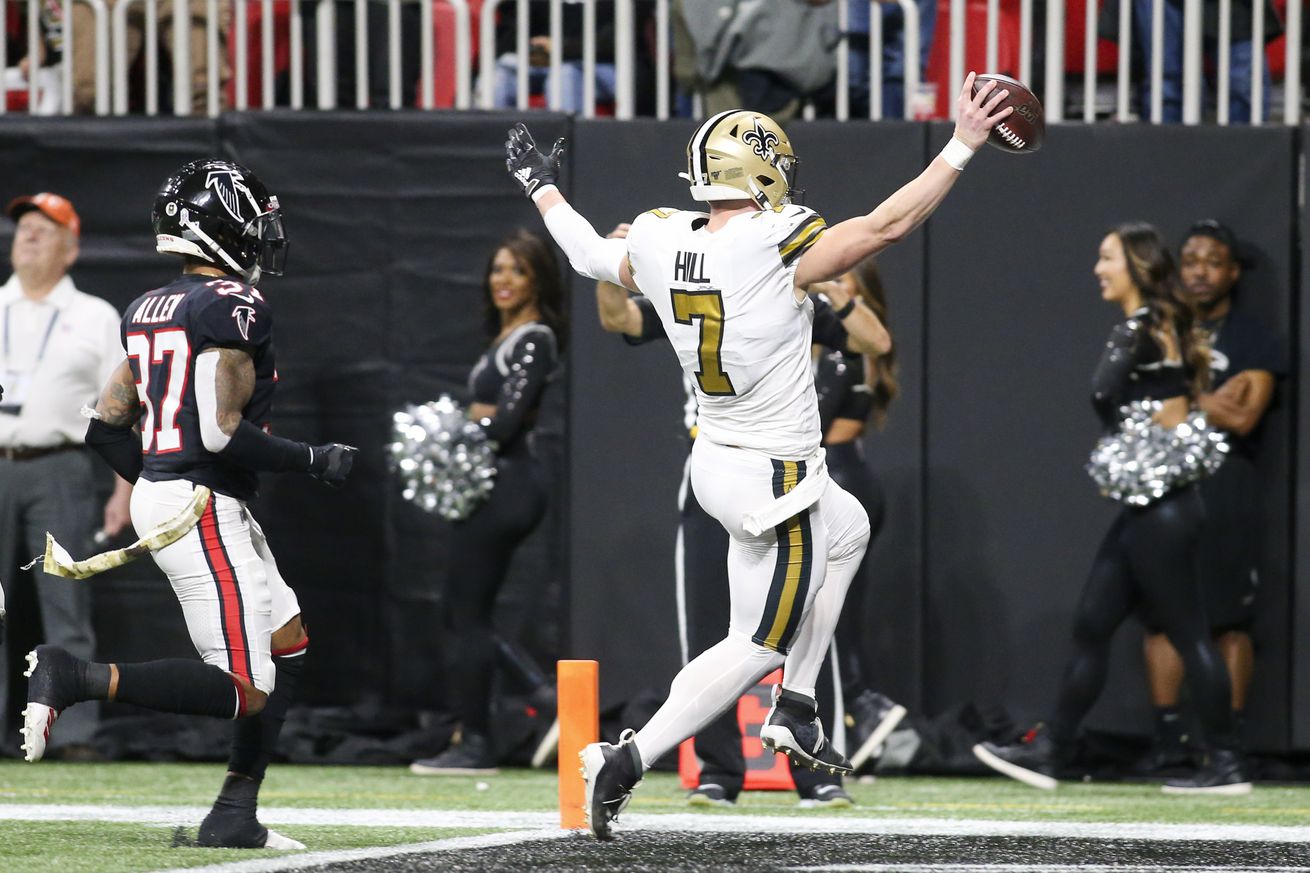 The Saints should consider dealing their prized Swiss army knife

The Taysom Hill hype train in New Orleans was in full effect this off-season after Hill’s career game in the team’s wild-card game outing. It was for good reason, as Hill finished the game against the Minnesota Vikings as the first player in NFL history with 50 yards rushing, 50 yards passing, 25 yards receiving, and 1 tackle in any NFL game in history – postseason or regular aseason.

Hill’s talent has been recognized so profoundly, that it was one of the reasons the team let Teddy Bridgewater walk out the door, despite the quarterback starting over Hill in Drew Brees’s absence. Lest we forget: Bridgewater was able to lead the Saints to a 5-0 record with Brees injured on the sideline.

When Sean Payton let Bridgewater exit the team’s doors, it wasn’t because Payton knew Hill could be a franchise quarterback. Payton wasn’t going to put the Saints future in the hands of a quarterback who’s longest career throw was a single 50-yard pass to the speedy Deonte Harris (who runs a 4.35 second 40-yard dash) with Xavier Rhodes (ranked 114th out of 120 corners by Pro Football Focus) in coverage.

The Saints coach went through with the decision to let Bridgewater walk because he likes to roll the dice. This is, of course, Sean Payton, we’re talking about. Sean Payton saw enough glimpses of Hill’s combined ability to run the ball and pass from not only the Minnesota contest, but in games like the Thanksgiving game: Saints at Falcons.

Payton ultimately wanted to go with the combination of either improving Taysom Hill to be that prototype Lamar Jackson, or have the heir to Drew Brees be a hungry quarterback that Sean Payton can maximize in his offense. Those two things are unfolding right now: Taysom Hill has re-signed to grind it out, and the Saints found that other hungry quarterback this off-season with Jameis Winston.

With the addition of Jameis Winston, Sean Payton should be more than content with Bridgewater signing elsewhere. Sean Payton would be shell shocked in February if they would bring in the 2019 passing yard leader into a backup role, on a contract worth around $1 million.

Winston should learn how to cut down his turnovers under Drew Brees and Sean Payton’s rhythmic offense. Winston would also be getting the keys to the Lamborghini of NFL offenses in 2021: Sean Payton is calling the script with the former No. 1 overall pick eyeing down Michael Thomas, Alvin Kamara, Emmanuel Sanders, and Jared Cook.

By all accounts, Winston has progressed well in the New Orleans offense. Meanwhile, Hill has seen his struggles with more reps for being a pocket passer.

Coach Payton has just got to love Winston’s potential in the Saints offense. He’s getting a quarterback with 10-times the experience of Hill, a quarterback with even more arm strength, and a player that’s already made great impressions in the locker room.

Winston and Hill have been splitting reps behind Brees of late. It’s a clear sign that no quarterback has separated themselves for the No. 2 spot. With respect, Taysom Hill’s production will come from his “joker” role this season, where he plays WR/TE/RB/FB, and occasionally quarterback. Winston is a true quarterback.

With Hill resuming his role from last season and Winston being one of the league’s top backup quarterbacks, the Saints should consider shipping their utility knife for their last championship piece. After all, this is still Drew Brees’s team, and they’re all-in for his second Super Bowl ring.

This is the time of the year where role players get traded, veteran players get cut, and some patient free agents pick a team. Right now, the Saints should pardon the feel-good story of Taysom Hill for an upgrade in the team’s winning chances.

At the quarterback position, Hill hasn’t stood out from Jameis Winston despite Hill has been there for three years and Winston has been there around for only a few weeks.

As for his “joker” role, Hill isn’t a dire need in that capacity. The Saints have also managed to upgrade an elite offensive unit from last year. While Hill cranked out six receiving touchdowns last year, it seems highly unlikely for that to unfold in 2020.

The Saints made headlines for acquiring Emmanuel Sanders in the beginning of the offseason. Sanders does most of his damage from the slot position, which is where Hill had his most damage last season.

The rookie, Adam Trautman, should be a stout No. 2 tight end, and he could also see plenty of slot work. Per college scouting reports, Trautman is also an excellent blocking tight end, so he should see more blocking packages in Hill’s place from last season. Outside of Trautman and Cook, good ole Josh Hill is still on this team as well.

Without a doubt, Taysom Hill holds talent and spark plays for the Saints. He can contribute to the Saints in 2020, but I don’t see him as a vital piece to their team.

I also don’t know if Sean Payton will have the future quarterback of their next dynasty be a 31-year-old dual-threat quarterback who is also a quarterback that will have plenty of reps as Kamara’s lead blocker in 2020.

This quarterback may not take over games from his “joker” role in 2020, or take over for Drew Brees after he retires, but he still holds serious value for more production in the team’s 2020 Super Bowl chances.

Sean Payton was clearly drinking Kool-aid this off-season. Payton put a first-round tender on Taysom Hill in free agency. Hill didn’t garner a first round pick from any team, but he certainly holds some worth, and he fits a popular mold in today’s age of quarterback play.

If Hill is worth a veteran corner or linebacker from a QB-needy team, that deal should take place immediately. Winston holds scary potential as he learns to cut his turnovers and utilize the Saints weapons after a few months of the “Harvard” education he gets under the Saints.

As for the exchange with Hill that could take place. A third quality corner could help the Saints secondary reach another level. The Saints would put themselves in a unique position to have their pass defense match their No. 1 rush defense. It would likely formulate the best secondary in the Sean Payton Era, now that Coach Payton has reunited with Malcolm Jenkins.

If they went a different route with a veteran linebacker, they could match a proven linebacker with the best linebacker in the league-Demario Davis. Nigel Bradham was signed and recently cut due to the potential the team has seen in a bunch of player players, but Bradham didn’t do anything in practices to set himself apart. The team is clearly willing to let a veteran take a job away from players like Alex Anzalone or Kaden Ellis, so they could find somebody much better and feel safer to avoid situations where multiple linebackers are injured on their side.

If the team can’t make a trade for the right player, Sean Payton should get really creative with dealing Hill for a high draft pick. Then the Saints coach can use that money for a prized free agent on defense.

The Saints are paying Taysom Hill 16.3 million in 2020. That money could also be well-spent for free agents like LB/DE Jadeveon Clowney or CB Logan Ryan.

If the Saints were to move Taysom, Saints need to pull the trigger now. If Hill doesn’t get much action in the first few games (which isn’t a stretch), or if Hill gets hurt, that’s a messy profile with a complicated contract for a team to gamble on. Hill still has the spotlight from his last-played game, known as his career game. He’s healthy now, and teams are evaluating their rosters, more importantly.

This trade may not be popular, but it should make a ton of sense. The Saints are loaded and all-in for Drew Brees to garner another Super Bowl trophy. The coach that has traded Jimmy Graham and Brandin Cooks in the prime of their careers should consider trading an intriguing back-up quarterback, Taysom Hill, for a different quality piece.

After all, there’s still the possibility that Drew Brees may be leading the Saints out of the tunnel beyond 2020.