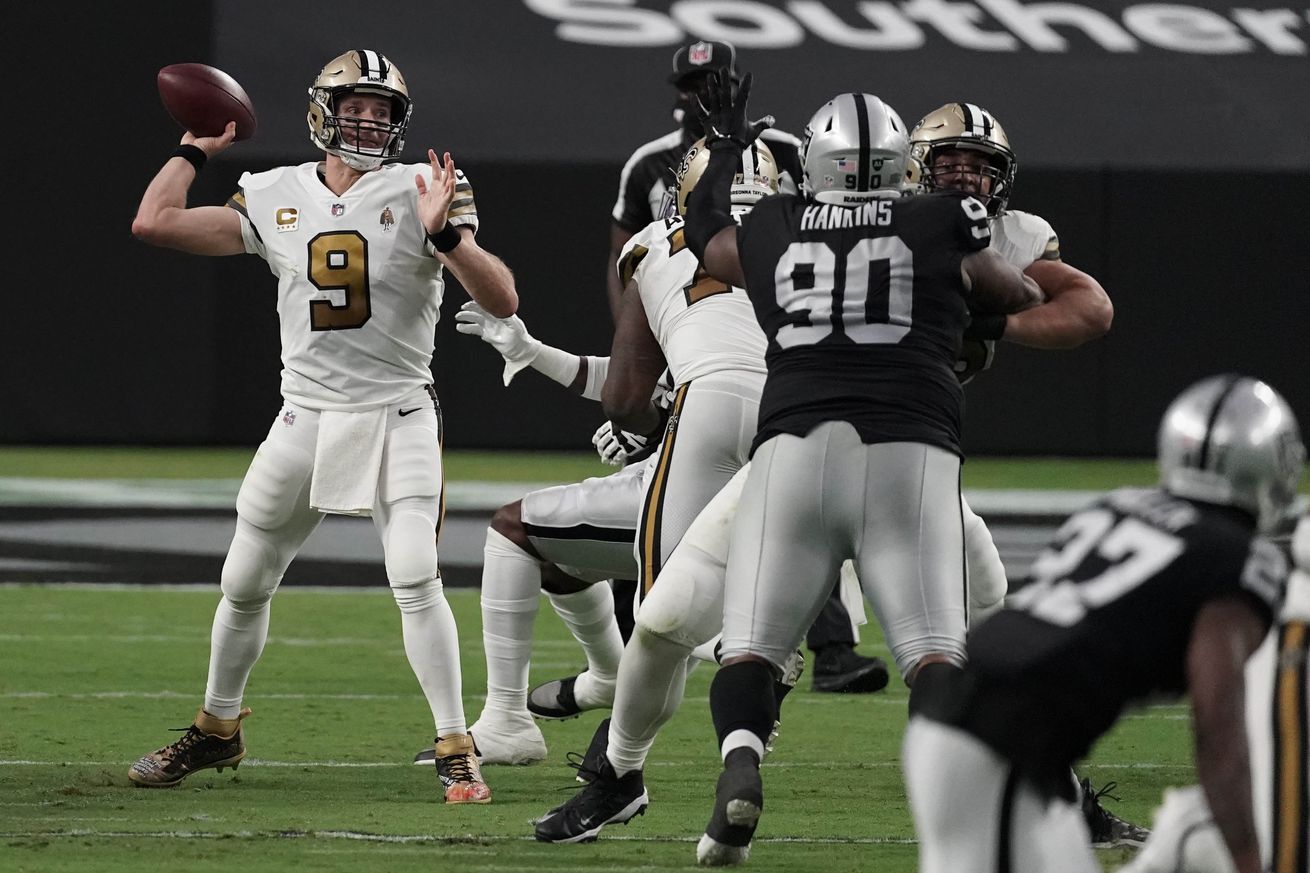 The Saints offense is running out of excuses, and they need to clean things up fast in order to have a shot Sunday.

There’s a little bit more hope for the New Orleans Saints passing attack to get going as they gear up to face the Green Packers on Sunday Night Football, after taking a look at every passing snap from Monday night.

The Monday Night Football broadcast footage made Drew Brees look a lot worse than the All-22 did against the Raiders.

Not that he was great by any means, but the 41-year-old quarterback had a few, dare-I-say, encouraging plays that showed off his anticipation and ability to look off defenders. But the chemistry with the receiver just wasn’t there.

Take this one for example:

Watching this live, it seemed like Brees flat-out missed Josh Hill on a crossing route. But if you take a close look, Hill stops in the middle of his route.

He does this because Brees takes a second to look off the underneath zone defender, before coming back to Hill, as you can see from the end zone view.

This is really a great, vintage play by Brees using his eyes to manipulate the positioning of defenders to where he can create an open look for his receiver. Unfortunately, he and Hill just weren’t on the same page.

This play is somewhat similar.

Jared Cook is running a crossing route behind underneath coverage as the Raiders deploy a Cover 3 zone, and Brees looks to take a shot that everyone has been yelling at him to do for the past few years.

He sees the underneath curl/hook defender has his back turned and that the deep third defender at the top of the screen is running full-speed downfield. So he tries to fit one in to his big tight end in the vacated zone.

The only problem is Cook hesitates on his route for whatever reason.

This gives the deep middle-of-the-field safety time to drive down and almost pick it off.

If Cook keeps running full speed, he’s got inside leverage on the free safety and an opportunity to make a contested catch like he did all through the latter half of last season.

Brees put his trust in Cook here, and he didn’t follow through, making Brees look like he made a poor decision live.

This next one, I can’t decide whose fault it was.

On one hand, the throw was a bit too high, but at the same time, it seemed like the connection between he and Cook was once again just off. Brees looks like he’s throwing this ball assuming Cook is going to have a clean cut on the seven (corner) route, but Cook pushes off and cuts perhaps a bit too sharply outside.

It ended up being offensive pass interference regardless. But nonetheless, these are all three potentially big plays that could’ve not only changed the game, but the perception of Brees’s performance as a whole.

This isn’t to exonerate Brees. He didn’t have a sharp game. Some of the blame for the lack of connection should fall on him, and he had a few straight up inaccurate passes to go along with an absolutely horrendous decision that ended up getting picked before halftime.

However, I think it’s safe to say I’m not quite as worried about Brees after watching the All-22 as I was when watching live. And without Michael Thomas in the game, there’s a valid excuse.

Still a bit worried overall, though.

Now, as for Green Bay

Brees and the offense will be going up against a unique Packers defense on Sunday. The first two defenses the Saints went up against were a bit more standard in that they, like most teams, ran bunch of typical Nickel defense (5 Defensive Backs).

The Packers are dead last in the league Nickel usage, with less than 30 percent. They’re second in Dime usage (6 defensive backs).

Some of this is due to the fact that the opposing offenses they’ve face have been down a lot and in obvious passing situations, meaning more DBs on the field.

However, even in just the first halves of those two games, they’re still sixth in Dime usage.

What also stuck out is that they’re third in Base personnel usage (4 DBs) in the first halves of Weeks 1 and 2.

Defensive Coordinator Mike Pettine runs a 3-4 defense, and gets five pass rushers on the line of scrimmage as often as possible to utilize his defense’s strengths.

Their Nickel personnel looks a bit different than usual too — when they run it — with a 5-1 lineman-to-linebacker ratio.

The strength of their team is their secondary and their pass rushers. With a great group of edge rushers — Za’Darius and Preston Smith, Kenny Clark and Rashan Gary — and back-end guys — Jaire Alexander, Kevin King, Adrian Amos and Darnell Savage.

Their weakness is their linebacking core. Christian Kirksey is a weak link, and he’s their primary inside backer. Other than him, the undrafted rookie Krys Barnes is their only LB with at least 30 snaps.

What the Packers like to do is utilize their strengths by loading up their front with pass rushers and the back end with DBs, similar to what the Chargers did against Lamar Jackson a couple years back.

Their pass rushers move all around the line, bound by no position tags. Gary and the Smith duo can be found on any position on the line.

With that being said, solid pass protection will be key for the Saints passing attack to function properly on Sunday. It was not good last week, particularly on the inside.

Andrus Peat had a horrendous day, along with Nick Easton.

That duo gave up a combined five QB pressures and four hits in Week 2.

They not only will need to hold up in their individual matchups, but keep good communication and react well to the Packers’ nasty stunt game up front.

This is a game where Drew will have an opportunity to dice up this defense underneath. They’ll have ample opportunities to run their option routes and West Coast-type concepts against favorable matchups underneath.

And to get these favorable matchups, they’ll need to play around with their personnel packages to get running back Alvin Kamara or tight end Jared Cook matched up with linebackers.

The Packers typically go with their Base 5-2 look when facing 12 or 21 personnel (2 WRs) and/or on early downs.

Knowing this, Sean Payton would be smart to get these personnel groupings out, by motioning Kamara out or simply clearing coverage out to get him singled up on a linebacker or edge rusher.

One of the weaknesses of the Packers’ 3-4 defense is they will occasionally have to ask their edge rushers to drop into the flats or man up a running back.

This has to be a feeding ground for Kamara if they get a look like this. The same goes for whoever is in the slot for the Saints at the time.

The Packers will often go Dime against 11 personnel (3 WRs), with two down linemen and two standing edges. When doing this, they’ll sometimes match up one of their extra safeties with the running back.

These will be favorable run looks for the Saints, with so many DBs on the field.

With the potential for a ton of favorable run looks, I’d also hope Sean Payton pumps up his play action usage, which is typically low from him. Given Brees’ effectiveness off of it last week, it wouldn’t be a bad idea.

Another thing that jumped out on tape was how many two-high looks the Packers deploy defensively.

They’re top 10 in the league in Cover 2, Quarters and Cover 6 usage. They put a lot of faith in their back end, and particularly their safeties, to prevent big plays and allow their pass rush to get home.

With the Packers playing as much two-high safety defense as they do, there should be some opportunities for Jared Cook to make plays over the middle of the field.

I’d love to see head coach Sean Payton and Brees search for and attack the Packers when they go Cover 2 zone, with a play similar to this one that Tampa Bay ran against the Panthers:

I’m about sick and tired of trying to think of ways for Emmanuel Sanders to get the ball. Brees said in an interview that they had a couple deep shots called for him, but the coverage didn’t allow for it to be thrown.

While he does have speed to run those deep routes, I just expected more from him in the short-to-intermediate range. We’re just not seeing him get a chance to really run these schemed up routes, get singled up on someone in the slot or anything like that.

Plus, when he has been thrown to, he’s dropping the ball.

Hopefully, this is a connection that will grow between he and Brees as the season goes along.

Tre’Quan Smith had a great game last week, and you’d love to see him continue that this week. But it’s not necessarily a favorable matchup for him or Sanders.

The Packers are strong on the outside, and it’ll be tougher for him to gain separation against corners Alexander and King than it was against Damon Arnette in Vegas.

I was half-wrong last week when I said this, but once again, I think this is a game where Cook and Kamara should eat. I was right about Kamara, but Cook didn’t do much besides the one TD.

Just stylistically, with how the Packers’ defense is constructed and deployed, it seems like those two guys will have the best matchups.

Whatever the matchups are, this is yet another chance for the Saints offense to develop some cohesion as a unit without Michael Thomas.

The chemistry, timing and execution all seem to be off with the offense, but it is still early in the year. It’s just funny that the tables are turned, when it’s usually the Saints defense that needs time early in the season to get their stuff together.

This game will be a key indicator of what’s to come in the passing game. This is a good pass defense that Green Bay has, and if the Saints offense can get going without its best player against them, it’ll be huge moving forward.