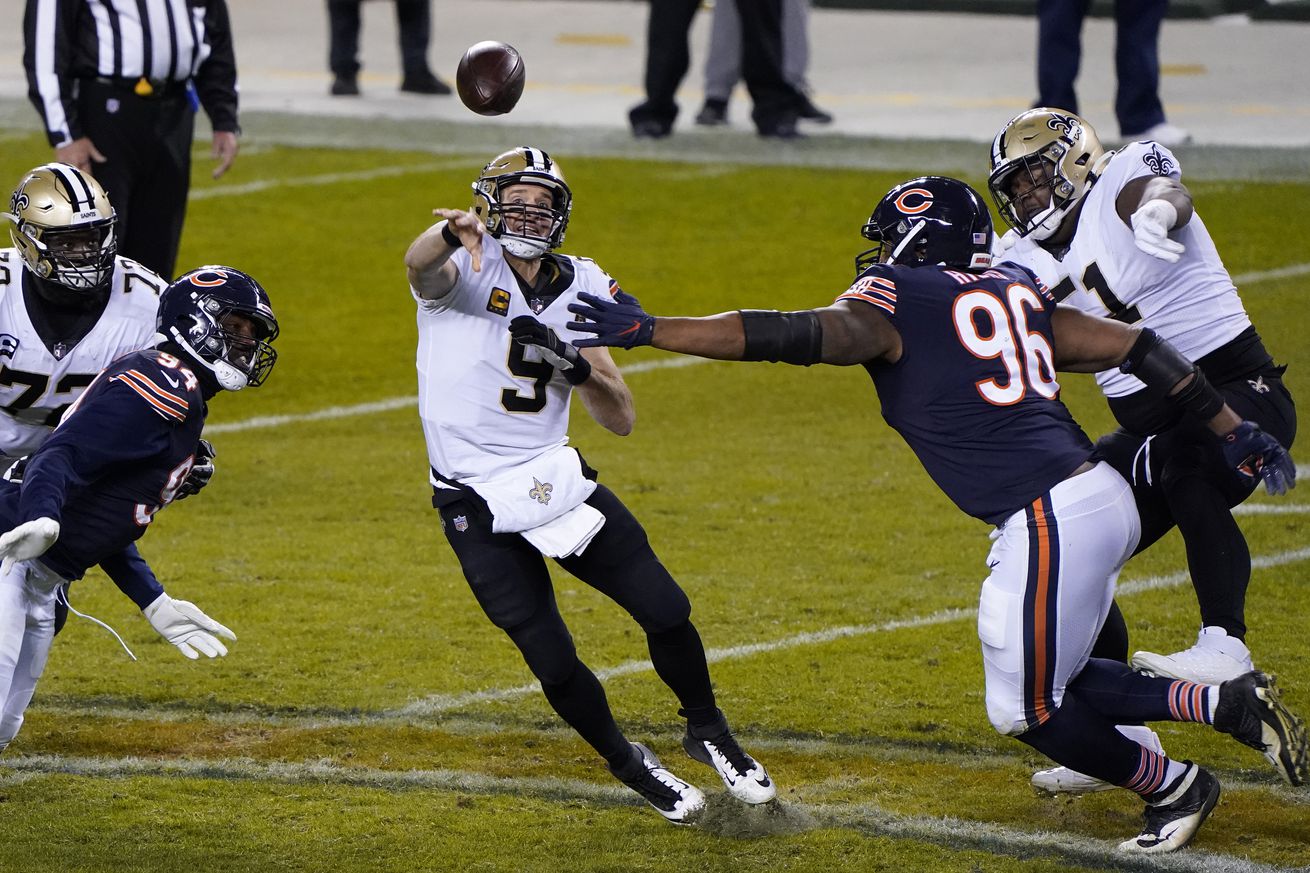 The Buccaneers and Saints sit quietly post-Week 9 with two losses. The stage is set for a No. 1 place seed in their battle come Week 9

The Tom Brady and Drew Brees saga continues. The two 40+ year old quarterbacks have brought their teams to impressive positions at the mid-year mark. The Tampa Bay Buccaneers sit on top of the NFC South with a 6-2 record, while the New Orleans Saints have played less of a game and hold a 5-2 record.

As for the degenerates in the South. The Atlanta Falcons maintain their 2-6 record, while the Carolina Panthers can’t bounce back from being .500, as they sit in a 3-5 hole. As for the future outlook, the New Orleans Saints take on Colin Cowherd’s No. 2 ranked NFL team-Tampa Bay Buccaneers come next Sunday. The Carolina Panthers battle goliath, also known as the real Top-2 team Kansas City Chiefs.

Let’s take a closer look at this division, which holds four teams that are so hard to predict.

The Tampa Bay Buccaneers were appeared to be a juggernaut after steamrolling Green Bay and Las Vegas. They walked into the New York game and they were lucky to escape with a win. This was a game where Tom Brady had a solid 279 passing yards, 2 passing touchdowns, and a 106 passer rating. That’s not a good sign for Tampa when Brady plays well in Week 8 and they come a penalty/big play from losing to Daniel Jones’s injured squad.

I believe that the thing holding the Buccaneers back is the reason that they struggled on Monday night. This team just doesn’t have leaders or many championship experienced players. In Week 8, this was a game where the Buccaneers should have been prepared to stomp on the Giants throats.

Looking forward—The Buccaneers get a huge matchup against the New Orleans Saints next Sunday. This matchup is against a Saints team that beat the Bears without Michael Thomas. Sean Payton always improves his team as the season goes on-which is a true sign of an elite squad. Whoever wins this game deserves to be Top-2 favorites in the NFC with likely Seattle.

The Saints seem to be in another dimension as Brees decided to turn the clock back. Ever since the Detroit matchup, Brees has looked crisp, a 2-minute god, and he doesn’t turn the ball over. The only thing stopping the Saints train is an injured offensive line unit that would then fail to keep their 41-year-old QB clean. Or an injury to Alvin Kamara.

The Saints get a date with the beloved, glorious, Power Ranking machine-Tampa Bay Buccaneers. It’s elite run defense vs elite run defense, Future hall of fame QB vs future Hall of Fame QB, Elite WRs vs Elite WRs, and Sean Payton vs Bruce Arians. Who will break? We will find out soon. Get your popcorn ready.

The Carolina Panthers appeared to the NFC sleeper, until they hit a wall. That wall would be the New Orleans Saints in Week 7. The Panthers have lost back to back games now. It’s time to hit the panic button. It’s hard to say it seriously because they play in the same division with the Buccaneers and the Saints. It could appear like all hope it lost with those few matchups, but there is an extra wildcard spot up for grabs. Anything can happen for the team that will get the early 2019 MVP favorite back soon-Christian McCaffrey.

The Panthers will be aiming to get McCaffrey against Patrick Mahomes and the Chiefs in Week 9. If McCaffrey doesn’t get the green light, they will be leaning on Top-5 WR in 2020-Robby Anderson to unravel his continuous highlight reel against the detrimental Chiefs secondary. They ought to take a book out of the Raiders playbook for shots against KC.

Well, well, well. What do we have here. Behold, the Falcons on a win streak. That would be a one game win streak. All in all, we may be looking at an angry Matt Ryan on a team that’s cleaning up penalties and pass protection. Not quite sure if winning is the best move for the future of this team. They don’t have a true head coach and they sit at 2-6. Should they rally for a 7-9 record now?

In Week 9, the Falcons take on the Denver Broncos. If the Falcons win, they could be sitting at 3-6 with a win against a division opponent in their pocket. If they lose, they are 2-7 and anything is on table for a certain playoff exit in early November. The two keys are a healthy Julio Jones and clean game on special teams and penalties: Let’s see what happens.