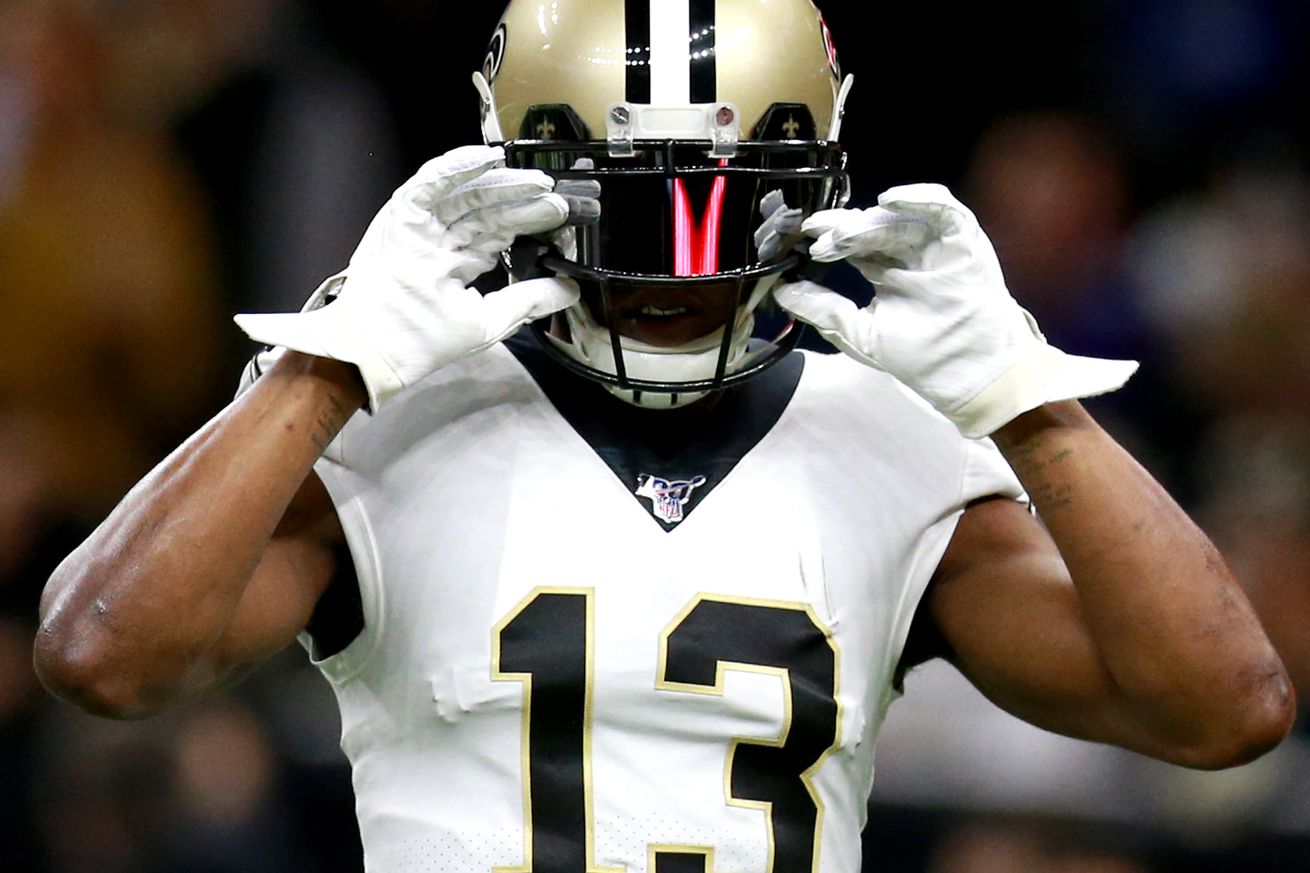 This article has been updated. Scroll down to see updates after the initial news coverage.

After missing three games of the New Orleans Saints’ first four games, wide receiver Michael Thomas will miss his fourth. Thomas has been ruled out of the Monday Night Football tilt against the Los Angeles Chargers. The record-setting wideout suffered a high-ankle sprain in New Orleans’ Week One matchup with the Tampa Bay Buccaneers.

Saints are ruling out WR Michael Thomas for Monday night’s game, per source.

There was hope that Thomas would return to match up with a depleted Los Angeles defense after being listed as questionable to play on the Saturday injury report. His original timetable for return was an estimated two to four weeks. So missing this week isn’t a huge surprise, though he has been limited in practice over the last two weeks. This is a clear forward-thinking decision by the Saints.

Without Thomas, Saints quarterback Drew Brees will continue to lean on the growing chemistry and trust with wide receivers Emmanuel Sanders and Tre’Quan Smith. Since week 2 at the Las Vegas Raiders, Smith and Sanders have combined for 349 receiving yards and three touchdowns including 147 yards against the Lions last week.

The Saints will also look to continue leaning on the run game with backs Alvin Kamara and Latavius Murray who have been outstanding so far, particularly Kamara. Kamara leads the NFL in scrimmage yardage (557) and touchdowns (7) while mixing it up with Murray. Murray has a pair of solid showings in the last two weeks himself including two touchdowns last week.

With this news, it looks likely that Michael Thomas will return to the field after their week six bye week to take on a better-than-expected Carolina Panthers team in week seven. This feels like a smart move on the Saints’ part to not rush Thomas back with a bye week on their heels. This should help make sure that he’ll be healthy moving through the meat of their schedule.

If Brees and his offensive weapons can continue to build their connection as we’ve seen over the recent weeks, adding Thomas to the mix should only add yet another layer to the offense.

UPDATE 10/11/2020 3:10 PM CT: Michael Thomas being ruled out of Monday night’s game is reportedly “not injury related.” No further details have become available at this time, but we will continue to update as they do.

Saints officially ruled out WR Michael Thomas and added that his “change in game status is not injury related.”

UPDATE 10/11/2020/3:13 PM CT: The Athletic’s Katherine Terrell has reported that Michael Thomas is not playing due to a “disciplinary issue.”

More specifically: Thomas is not playing because of a team disciplinary issue. https://t.co/qo4OPbTK6X

UPDATE 10/11/2020 3:23 PM: It looks like Michael Thomas was on his way to being active for the Saints until the star wideout “had an altercation with a teammate” during Friday’s practice which led to the aforementioned disciplinary action. Thomas will not be available Monday night following these events.

Saints’ WR Michael Thomas had an altercation with a teammate at practice this weekend, per league sources. Saints now disciplining Thomas by sitting him Monday night, when he was being listed as questionable with an ankle injury.

UPDATE 10/11/2020 3:39 PM CT: Per Josina Anderson, the altercation reportedly took place on Friday and led to Thomas being told to leave practice. After a meeting with Sean Payton, Thomas looks to have been fined and given what sounds like a suspension considering he will “return to the team” next week.

Adding: Source: I’m told #Saints WR Michael Thomas was told to leave prax Friday after an altercation w/a teammate in practice. After meeting with the HC Sunday, Thomas has been fined for conduct detrimental and won’t play Mon. Expected to return to the team some time next week. https://t.co/VaGEkv07yA

UPDATE 10/11/2020 4:03 PM CT: Tom Pelissero reports that the player Thomas had the altercation with was second-year defensive back C.J. Gardner-Johnson (aka Ceedy Duce). neworleans.football’s Nick Underhill highlights this is not new for this pair.

#Saints star WR Michael Thomas punched teammate Chauncey Gardner-Johnson during a fight in practice, per sources. That’s why Thomas was ruled out for Monday’s game against the #Chargers for what the club is calling team discipline.

The altercation between Thomas and Chauncey Gardner-Johnson came at the end of practice. There was jawing back and forth and then Thomas hit him, leading to a fight. The decision to suspended Thomas came this morning.

Per sources, the altercation b/w Saints WR Mike Thomas and DB Chauncey Gardner-Johnson came during a 5-play red-zone period yesterday at practice. MT didn’t like how CGJ was covering him, they jawed, couple snaps later Thomas threw a punch.

CGJ was wearing a helmet at the time.

What do you think of this decision? Would you rather see Michael Thomas on the field this week? Let us know in the comments. Make sure you follow Canal Street Chronicles on Twitter at @SaintsCSC, “Like” us on Facebook at Canal Street Chronicles, and make sure you’re subscribed to our new YouTube channel. As always, you can follow me on Twitter @RossJacksonNOLA and subscribe to my daily Saints podcast, Locked On Saints.