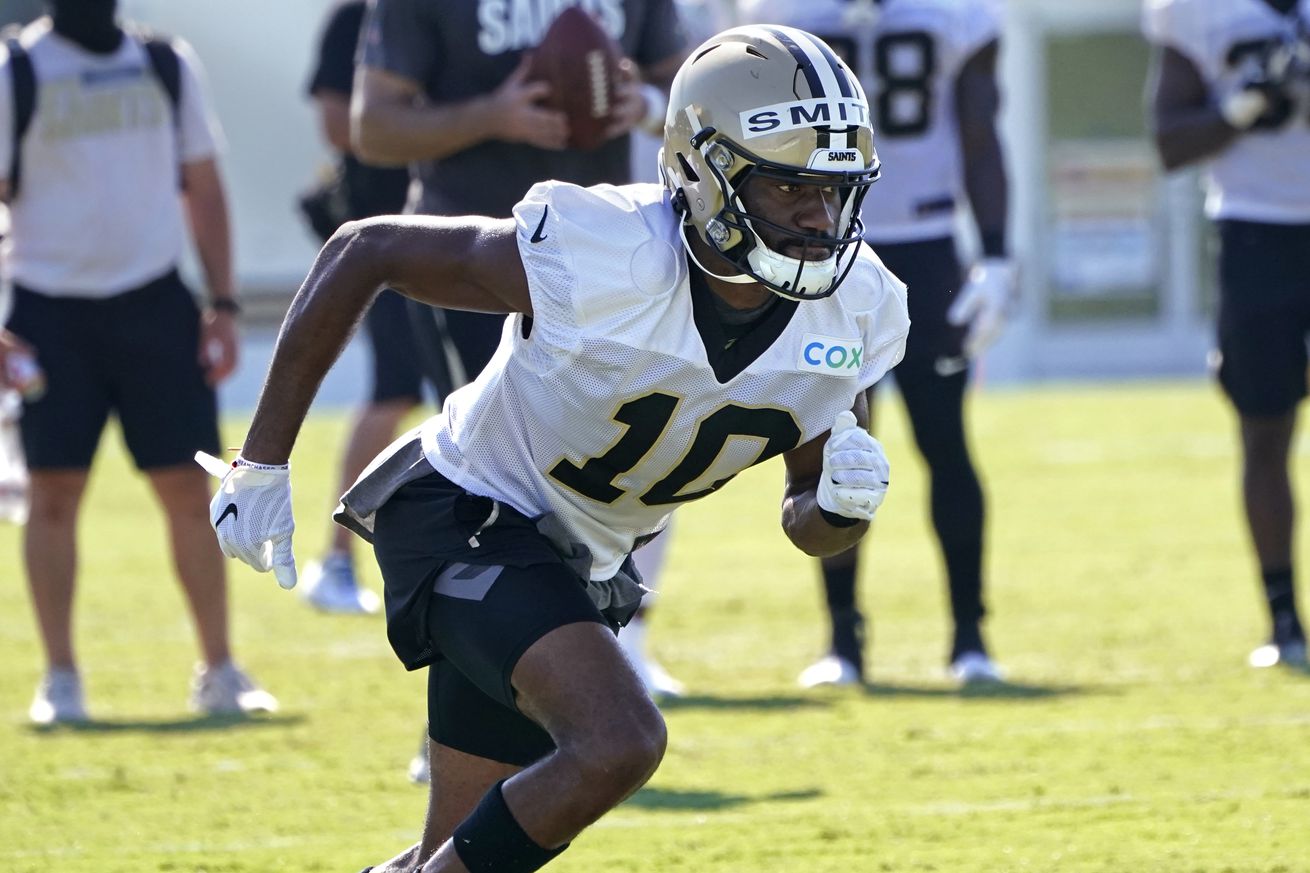 Head Coach Sean Payton recently spoke highly of the Saints receiver in a post-practice conference. Here is a look at some of what he is asked to do in New Orleans.

The wide receiver position has been getting a lot of social media play through the first week of camp. But one name has not gotten the attention of ones like Emmanuel Sanders, Bennie Fowler, and Deonte Harris. We asked New Orleans Saints head coach Sean Payton about third-year receiver Tre’Quan Smith:

“He’s an important part of what we’re doing offensively,” Coach Payton said. “He is one of those players that will make a catch in traffic that a lot of guys may necessarily not have the same appetite for.”

Payton also mentioned that Smith is tough and has been doing well. That toughness has come in handy more than a few times.

Smith is often evaluated as an inconsistent player in terms of receiving production. Which may not an unfair assessment when looking at the receiving yardage share over his first two seasons. With only 234 receiving yards in 2019, just below 45% came in two games against the Rams and the Week 17 matchup against the Panthers. This is akin to 2018 where about 63% of his 427 receiving yards also came from just two games.

However, if you look at the rate he finds the endzone you might find a different story. Smith reeled in five touchdowns in each of his years with New Orleans. 20% of his 2019 receptions went for a score while he found the endzone on about 21% of his catches in 2018. That also translates to one touchdown every 85.4 yards in 2018 and one every 46.8 last season.

“He’s an important part of what we’re doing offensively.”

While the numbers can be strategically selected to support either story, focusing on his role through film provides additional context of his importance. “Look, some of the things that he’s asked to do occasionally is more physical in nature.”

There are three examples that come to mind as to how Smith’s physicality plays into the Saints offense and serves an important role. A role that make it important to not just hand over roster spots to any week’s current hot names. Let’s start with what coach Payton mentioned himself.

NFL’s Next Gen Stats records separation yardage for wide receivers that saw more than 43 targets in a season. Smith didn’t get enough targets to be ranked in 2019, but he did for his rookie season. Smith’s 2.2 yards of average separation per catch or incompletion ranked among the lowest in the NFL. However, his 63.64 catch percentages ranked second highest among receivers with less than 2.5 average yards separation.

Looking over his 48 career regular season and playoff receptions, about 20 came with a defender within two yards and four required hanging on after big hits. Those included a lost helmet after in one of last year’s Falcons games and a pair in the endzone, putting points on the board.

There were also many instances of Smith fighting through contact, diving to the ground, and making catches while falling out of bounds. All of which can be classified in the physical category that Coach Payton mentioned.

Continuing with the physical nature of Smith’s role, he has always been considered a good blocking receiver in the run game. The UCF grad often lined up in the slot (by necessity at times according to WR coach Curtis Johnson) and at the Z. Thus, he spent a lot of time on the strong side of the offense, where that run blocking ability is important.

Because of his activity in the run game, New Orleans was also able to set up plays like Smith’s Week 12 touchdown catch against Carolina. Before the snap, he lines up tight to the formation, helps sell the play fake by sizing up the safety, and then once the safety commits to the run, the wideout makes his break to get wide open in the endzone.

New Orleans also utilized Smith to help sell play action passes by having him chip edge rushers before running his route. This chip ‘n go approach provided some help off the edge and allowed for a delayed release and safety valve for the quarterback, which came in handy multiple times in 2019.

Smith does a very good job finding open areas of the field in scramble drills and when plays break down. Which sometimes requires him to fight through contact at the catch point or make falling catches both in bounds and at the boundary. This might feel like a small thing, but having the wherewithal to know when to work back to the quarterback or work up field in the appropriate situations is a positive quality.

This can also come in handy in the red zone where Smith reeled in all four of his targets, each for a score.

While the Saints either look for ways to more consistently utilize the 6-foot-2, 210-pound receiver or hope for him to take the next step in his third year, there are elements of his game the team clearly values. If he does indeed find or create more consistent production in 2020, it will be massively beneficial both Smith and the team.

Having another reliable wide receiver option along with Thomas and Sanders, even if he only sees a moderate amount of targets would be outstanding for New Orleans. Meanwhile, a nice 2020 performance could yield some assurance for Smith going into an unprecedented 2021 salary cap situation across the NFL.