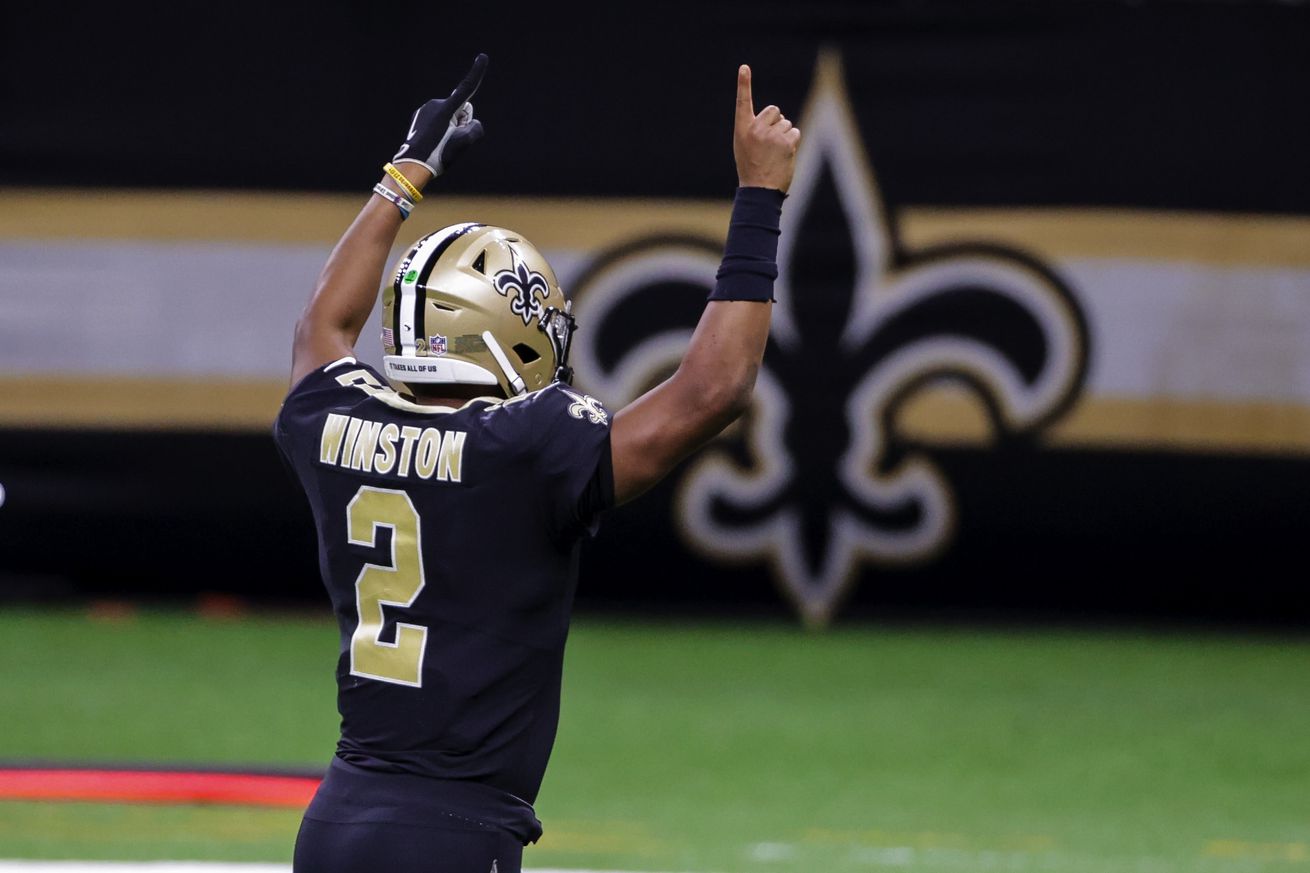 The New Orleans Saints will have to choose between quarterbacks Jameis Winston and Taysom in the coming days. The choice isn’t hard

By now most everyone has seen the reports that New Orleans Saints quarterback Drew Brees has suffered five broken ribs and a collapsed lung. He suffered the injury during the first half of a 27-13 victory over the San Francisco 49ers. That prompted Jameis Winston and Taysom Hill to take the reins, with Winston taking the majority of snaps under center during the second half.

Brees’s injury will keep him sidelined for an undisclosed amount of time, therefore, the Saints will have to start a quarterback that is not named “Drew Brees.” They have two options in Winston and Hill, and the choice shouldn’t be hard. New Orleans needs to, and likely will, choose Winston over Hill to assume the starting duties.

Now, most will point to the contracts the two quarterbacks signed as a counter-argument. Hill just recently signed a two year, $21 million contract after having been tagged with a first-round tender in the offseason. Winston, on the other hand, is on a one-year, $1.1 million contract. Additionally, haven’t we heard since last year that Hill is “the next Steve Young” and one of the most athletic players in the NFL? Of course, but some of that was just propaganda pushed by the team.

The reality here is this: Taysom Hill is one of the best utility players of all-time in the league. He signed a contract that envisioned him playing special teams, running back, tight end, wide receiver, and yes, even quarterback. Winston, on the other hand, signed a contract that would see him play quarterback in the event Brees went down with another injury, similar to last year’s situation with Teddy Bridgewater.

Hill has attempted just 20 passes in his ENTIRE NFL career. He has completed 11 of those passes for 255 yards, 0 touchdowns and 1 interception. However, that is clearly not where his value lies – instead his value lies in what he can do with the ball to create yards with his legs, not his arm.

Hill is an incredible threat as a running back and as a receiver. It makes complete sense why head coach Sean Payton is constantly putting Hill under center in third-and-short situations. More often than not he is going to convert the first down. But, his inability to read NFL defenses effectively prohibits him from being a starting quarterback.

Winston is a different story. Jameis was the first overall pick of the 2015 NFL Draft. During each of his first two seasons in the league Winston threw for over 4,000-plus yards. Last season he led the NFL in passing, throwing for 5,109 yards and 30 touchdowns.

Now, I’m not glossing over the interceptions. Winston can be prolific because he takes chances, and sometimes those chances don’t pay off and end up in the box score as an interception. Yet, when Winston is in the zone, he is arguably one of the most electric quarterbacks in the league. He can be a constant highlight reel.

Incredible scramble from Jameis Winston to eventually complete a bomb on 3rd and 10 pic.twitter.com/wqTQn9B5co

So, why did Winston sign a deal that effectively saw him become the 57th-highest paid quarterback in the league? He wanted to go to “Quarterback University” with Professor Brees and learn what it means to become an elite quarterback. If it worked for Bridgewater, then why not Winston? The turnovers won’t completely disappear, but they should become less frequent in Payton’s offensive scheme. Winston will be eased into a flow that likely focuses on reliable targets such as Michael Thomas and Alvin Kamara. That alone should help reduce turnover worthy plays.

We can’t put much stock into Winston’s performance on Sunday afternoon against the 49ers. Again, much like Bridgewater, Winston was asked to come in as relief for Brees with little preparation, and hasn’t seen much live action since last season. Criticizing him for his second half performance is silly, counterproductive, and it really doesn’t prove much. Jameis will now have an entire week of preparation to meet the bottom-dwellers that are the Atlanta Falcons. He will also have the full faith of his coaching staff, and more importantly, his fellow teammates.

Hill was paid to be a “human Swiss Army Knife,” but Winston was brought in to replace Brees if he were to go down with injury. It is, and always has been, the plan. Jameis will find success in this offense because he has the pedigree, the talent, and the support needed to do so. Winston will be the starter for the Saints until Brees gets back, and the decision isn’t particularly close.