Colts cornerback T.J. Carrie is set to meet with the Saints (Twitter link via Adam Caplan of SiriusXM). The Saints have been looking for corners to support Marshon Lattimore and Carrie could fit the bill. 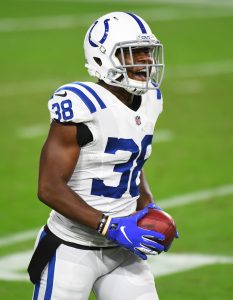 Carrie spent 2020 with the Colts and finished the year with two interceptions, a fumble recovery, and two touchdowns. His first TD came off of a pick six against the Jets in Week 3. Then, against the Titans in Week 10, he scored again off of a punt return.

Carrie was mostly used as a reserve last year, but he was first-string for much of his early Raiders tenure. There’s a chance that Carrie could fight his way into the starting lineup if he’s signed, though he’s more likely to fill Justin Hardee‘s shoes as a reserve and special teams ace.

The Saints previously considered corners like Chidobe Awuzie, who landed a three-year deal worth ~$22MM with the Bengals. They’re also said to be interested in multiple-time Pro Bowler Richard Sherman. Carrie would represent a cheaper solution at cornerback — one that wouldn’t limit them from a splashier acquisition later this year.