The Saints made some big changes at receiver this offseason, trading up for Chris Olave and signing Jarvis Landry. These additions and Michael Thomas‘ expected return would not leave nearly as many opportunities as the rest of New Orleans’ wideout cast received last season. 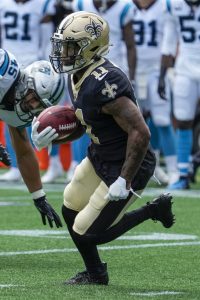 Prior to the Olave trade-ups and the Landry accord, the Saints tendered Deonte Harty at the second-round level. The former Deonte Harris signed his RFA tender in April, and Nick Underhill of NewOrleans.football tweets Harty is expected to show for Saints minicamp this week. But the 5-foot-6 wideout/special-teamer is seeking a new contract, Underhill adds.

Harty will make $3.99MM on his RFA tender — well up from the $850K he earned in 2021 — and does have an All-Pro nod on his resume. Harty received that honor as a punt returner in 2019, his rookie season. Harty has remained New Orleans’ primary kick and punt returner in the two seasons since.

A former UDFA out of Division II Assumption College (Massachusetts), Harty became a necessary piece at receiver for the Saints last season — when Thomas’ evolving timetable (and eventual full-season absence) wrecked the team’s aerial setup. Harty caught 36 passes for 570 yards and three touchdowns. Of course, he also served a three-game suspension for a summer 2021 DWI arrest. The Saints and Harty are not believed to be close on terms, Ian Rapoport of NFL.com tweets.

Harty may be eyeing recent deals handed out to some return men this offseason. Fellow All-Pro returner Jakeem Grant signed a three-year, $10MM deal with the Browns in March. The Jets gave 2021’s All-Pro kick returner, Braxton Berrios, a two-year, $12MM deal this year. Despite Berrios’ momentum and increased usage in New York’s offense, Harty bested the part-time Jet slot’s yardage total (431) by a considerable margin and did so in playing fewer offensive snaps.