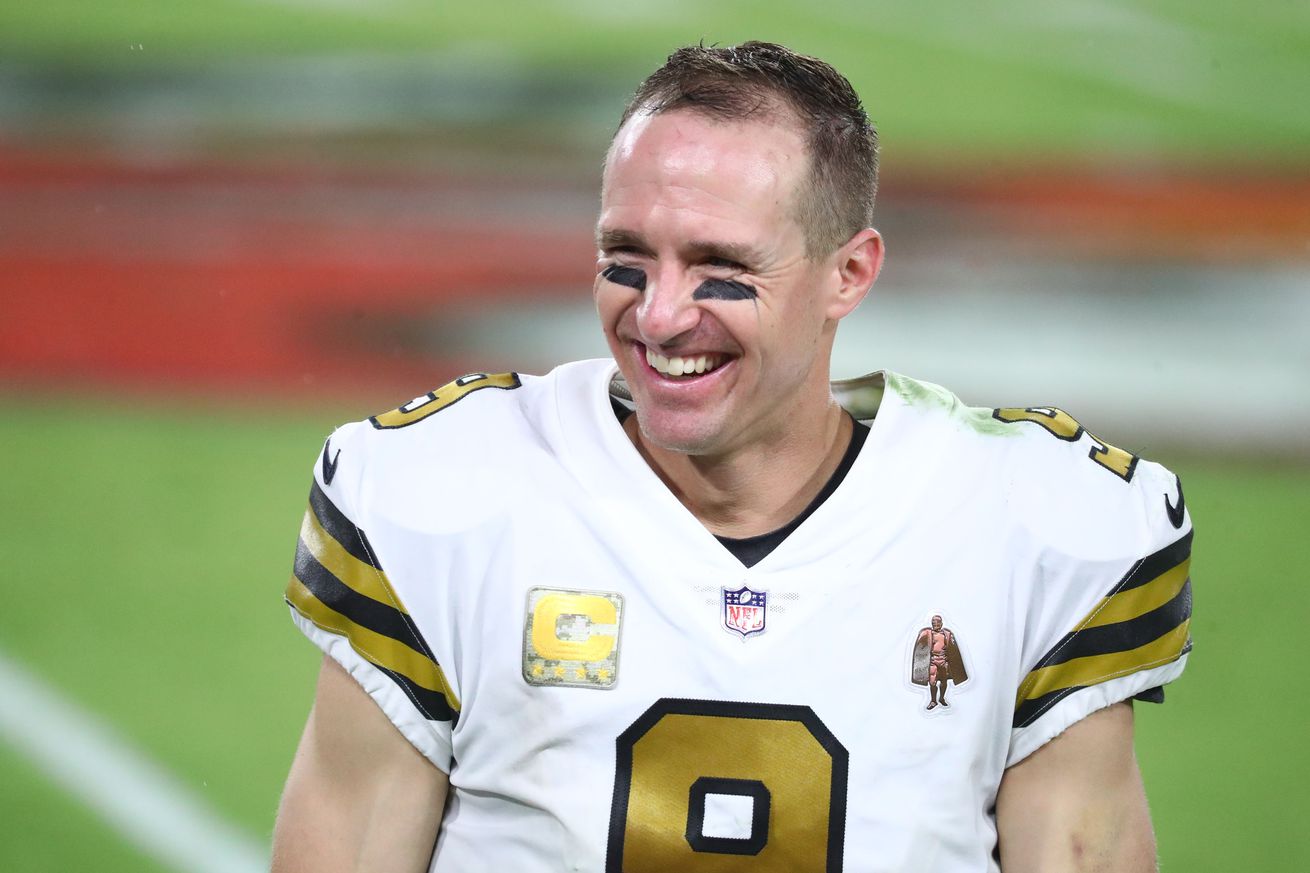 Yes, 2/3 of this article were a stretch after the Saints put on an absolute primetime clinic.

How about that Antonio Brown trade? I’m genuinely at a loss for words – and essentially eating all of my own for the past two weeks. The New Orleans Saints put on an absolute clinic in their ridiculously dominant 38-3 win over the Tampa Bay Buccaneers. I may be the lone soul who picked the Saints as Week 9 victors, but if you’d had told me this would be our outcome a week ago, I would’ve asked for a pertinent tin foil hat.

This week’s article, title-wise, is absolutely ridiculous to break down. As pigs essentially flew for the second time in New Orleans on Sunday night, this week’s piece is emphatically to be taken tongue-in-cheek. Let’s get to it.

Looks like the Mike Tyson version of the #Saints showed up tonight. pic.twitter.com/APd80ZmOZ3

The Good: Legitimately Everything

To say the Saints Week 9 performance was nothing short of a dominant, complete team performance would be an understatement. Anything less would be a pure disgrace. Every single person in sports media decidedly called this game for the “Super Bowl bound” Tampa Bay Buccaneers. Did they check the most recent injury report showing Michael Thomas, Emmanuel Sanders, and Marquez Callaway as full participants? At the offset of this game, I remarked that I hadn’t felt this comfortable watching the Saints this season since our Week 1 matchup (…against the Bucs). New Orleans does not know how to comfortably win football games – it’s just not in their DNA; accordingly, I genuinely do not know how to compute this performance.

New Orleans put on an absolute clinic on all fronts in this embarrassingly lopsided game, scoring a season-high 38 points. The Saints are at their best when they’re deemed the longshot underdogs; particularly, there’s no better version of Brees than a perturbed, chip-on-his-shoulder assassin like we saw Sunday night. After holding Tampa Bay to 3-and-out on their opening drive, New Orleans dominantly marched down the field to a swift touchdown. By the end of the first quarter, Drew Brees was 11-of-12 for 118 yards and 2 touchdowns, with completions spread to 9 different receivers. And I’ll go ahead and say it – Taysom Hill had a hell of a game and made a strong case for the future of the franchise. Any glimmers of conspiracy hopes from his 2019 outing were revived by his impact on several drives – including a decent amount of run-pass-options that actually resulted in completions. But ultimately, this came down to a flawless performance by Drew Brees – the rest of the positives on offense were just lagniappe.

Throughout this season, New Orleans has had a solid enough offense to bolster deep playoff berth hopes; their Achilles Heel, as always, has been the pitiful defense. Color me silenced. Typically, this type of offensive showing – with the appropriately stacked weapons – isn’t entirely surprising. What was incredibly shocking was the answer on defense – particularly after Brees’ singular fumble. The defense put many qualms to rest with a deafening silence. After a relatively quiet first-half season showing, Janoris Jenkins, Marcus Williams, Marshon Lattimore, Malcolm Jenkins, and several others returned to lethal form.

The pass rush was unrelenting, and the three sacks on Brady don’t accurately depict the absolute collapse of Tampa Bay’s pocket the entire game. The Saints jammed the gas pedal on dominant play on both sides of the ball from the outset, and the Buccaneers never even had a moment to catch their breath. They held Tampa Bay to a season-low 194 total yards and hauled in a season-high three interceptions; not only did New Orleans hold Brady to the third lowest passer rating of his career, but they also were the first divisional opponent to sweep Tom Brady for the first time in his 19-year NFL career.

Besides shipping my knockoff personal game balls to Trey Hendrickson and Demario Davis, there’s not much else I can intelligently opine about this complete team performance. It was nothing short of dominant and brought criticisms to a screeching halt. I mean, the defense literally turned into a volleyball team on one interception:

The @Saints D getting the ball back for their offense! #Saints | NBC pic.twitter.com/lruzjVdYhJ

New Orleans – with a huge thanks to our friends over in Buffalo – now moves into the No. 1 seed in the NFC, and there is legitimate cause for them to be viewed as Super Bowl favorites should this play continue. If you thought Cam Jordan’s years-long roast on Cam Newton for sweeping Carolina was bad (and by bad I mean extremely hilarious), Tom Brady is in for a brutal reckoning.

Saints WR Michael Thomas, speaking for the first time since his Week 5 disciplinary incident, said “My emotions got the best of me. I’ve grown from that.” Also said he is here to help his team win games and win a championship.

The Bad: The Irrelevance of Michael Thomas?

I am genuinely splitting hairs here; there is no appropriate bad nor ugly in this Week 9 performance. But for all the smoke surrounding Michael Thomas the past few weeks – Mike TMZ gate, trade rumors, faking injury to bolster said trade rumors – he was decisively quiet in tonight’s matchup. This isn’t me condemning large wide receiver contracts from the rooftops; I’m just genuinely curious: where was Michael Thomas tonight?

Two conclusions can reasonably be derived from his meager outing – he’s either more injured than he’s still letting on, or he’s essentially become out of place in the Saints offense. That’s not to say he’s on his way out the door or anything ridiculous of the sort, but his invisibility was a bit puzzling. Ironically, I’ve been saying that Drew Brees needed to learn how to sink-or-swim without the crutch of Thomas all season; now, he’s almost become a non-factor in Brees’ season success. More than anything else, really, my takeaway from the offensive outing this weekend was that we’re back to 2010 vintage form. This stat, particularly, hones it in:

The Saints tied a modern-era NFL record when 12 different receivers caught passes in their 38-3 win against the Buccaneers on Sunday night. The NFL record is 13 set by Washington in 1947. Since then, eight teams have had as many as 12 different players catch passes in a game,.

Perhaps the receiving corp finally found their sweet spot as a whole, and his star power isn’t as critical to their overall success; with the emergence of Marquez Callaway, the reliability of Emmanuel Sanders and Jared Cook, the obviously electrifying Alvin Kamara, and the weekly X-factors in Taysom Hill, Adam Trautman, Deonte Harris, and Tre’Quan Smith, there’s just too many options to spread the wealth. But it’s highly likely that Thomas wasn’t playing 100%; depending on how you look at it, there’s an argument for optimism and (extremely slight) concern. Was that Week 1 garbage time high-ankle injury really more serious than envisioned? Did the hamstring injury just stiffen that leg entirely?

If I must adhere to a weekly format when the Saints put on a 38-3 smackdown, someone must accordingly be the tongue-in-cheek scapegoat. If the worst player on New Orleans offense was Michael Thomas, there’s just not that much cause for criticism at all.

The Ugly: The Disrespect of Drew Brees

There is a house in New Orleans, they call the Super Dome. And thanks to a one-in-500 injury, a meeting of two kindred spirits, and a wrong turn into the Lower Ninth Ward in 2006, it’s where Drew Brees calls home. Perpetually deemed always-the-bridesmaid, Brees’ performances like tonight serve to remind us just how lucky we need be for our 15-year quarterback. Yet, if you delve outside of Saints media – at least prior to this game – he’s never truly appreciated as one of the greats.

Conversely, Tom Brady is emphatically awarded dynasty-level accolades, consistently excused for less-than-optimal outings, and will always be seen as King of the Castle with his 6 rings. Brees, meanwhile, has been criminally rebuffed for the league MVP award, is never universally included as an all-time-great, and has always been seen as the Black Swan of the modern era in comparison to Tom Brady and Peyton Manning.

Allow tonight’s performance to serve a deafening silence to the Skip Baylesses of the league (speaking of which, should someone check on him?). I’ll say it again – what a privilege it is to watch Drew Brees. It was hard to do so by the 31-0 halftime score without bursting hysterically into laughter, but nights like tonight need not be taken for granted. Every single NBC analyst picked Tampa Bay as tonight’s victors; accordingly, they were favorited by 6 points. Not one person bet on Drew Brees – and yet, in hindsight, this seems entirely ridiculous.

The Buccaneers literally tried to pull Antonio Brown out of the NFL gutter to pull one over on Brees and the Saints. They barely even sniffed the red zone. Meanwhile, Brees was so decisive and flawless in his execution that Michael Thomas was rendered needless in New Orleans dominant victory. Drew may not be in the running for this year’s MVP award, but there needs to be some sort of lifetime achievement award enacted that properly awards Brees with the credit he so painfully deserves on his send out. Though, I’m sure he would be just as happy with one more ring. I’m praying the defense can keep 50% of this energy up – if so, the ceiling is nothing short of Two Dat for our beloved longtime quarterback.