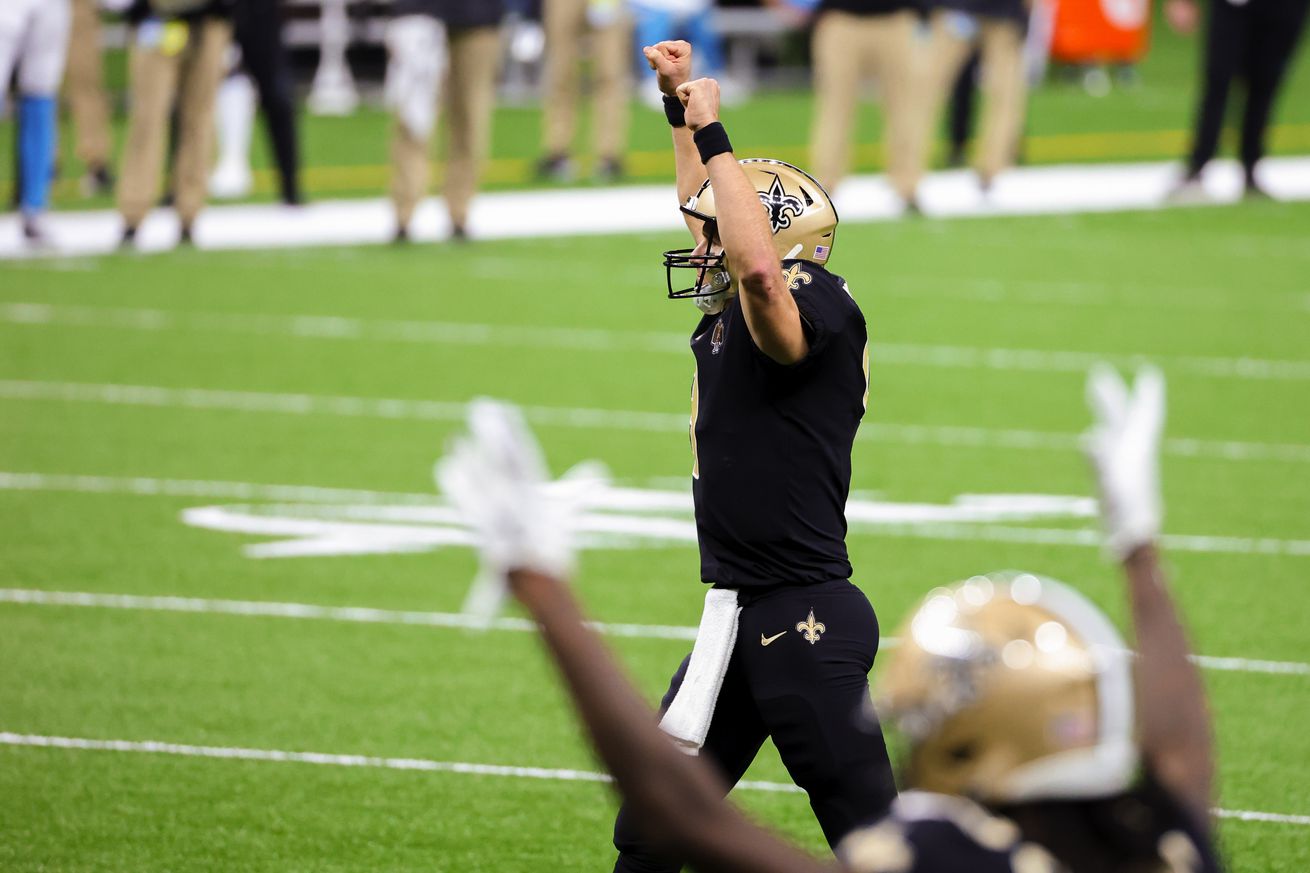 Another record for Drew Brees in the Saints 27-24 win by an undrafted receiver. Are we in 2010?

Another Sunday, another 11-point lead blown by the end of the third quarter. The New Orleans Saints rose to 4-2 in another nail-biting 27-24 win against the Carolina Panthers. One that came down to an NFL record 65-yard field goal attempt that fell short by a yard. Maybe it was the Popes back in the stadium that blew the football down; it was refreshing to hear a Who Dat chant, albeit soft, reverberating through the Superdome again.

Fans hit the chant during the break pic.twitter.com/qb1EY4HQpZ

Division matchups are never easy; a team can be 1-5 with a franchise-worst defense, and play like a Top 5 pass rush against a division rival. This rung very true in today’s NFC South contest. It was a battle of one of the league’s worst third down and red zone offenses against the dead-last red zone defense – I’ll let you guess which is which. It was an ugly win, but the Saints are at their best when they have a bit of grit and overcome adversity, maddening as it may be. New Orleans has managed to find success in the absence of Michael Thomas, and today was perhaps the most reassuring outing by Brees and the offense yet. Of course, the Saints can’t ever make it that simple. Let’s get to it.

Drew Brees has literally been doing this for two decades and no one has ever stopped it.#Saints 14, Panthers 3 pic.twitter.com/n3aCtOVFDL

How about a duly round of applause for Drew Brees. The captious criticism of Brees this season has been unrelenting; his arm is a noodle, he’s washed and can no longer throw downfield, he’s lost faith in his abilities and hesitates. Brees put all performance qualms to rest with a deafening silence.

Brees played impeccable football today, lights out, with nameless rookie receivers and a battered o-line. In spite of his 41-year old aging self. Quietly, Brees hit yet another career milestone in the Saints 27-24 win on Sunday. Brees became the first passer in NFL history to hit 7,000 career completions by the end of the first quarter. When he became the NFL’s all-time career passing leader in 2018, Brees sent out nearly 200 footballs to every person who played a role in his 18-year career record. This year, he has a new name to add to that list – Marquez Callaway, on the receiving end of his 7,000th completion. Name a better duo: Drew Brees and undrafted receivers.

Thank you @drewbrees and @saints for this token of appreciation. I’m at a loss for words and can only say that it was a privilege and honor to be your teammate. You’re a class act brother and one of the greatest to ever do it!!! #Thankful #Salute ⚜️ pic.twitter.com/N5X5iJKdZ9

However, this milestone will likely be blown over by the morning, in addition to Brees’ 52nd career game-winning drive, second to just Peyton Manning in the Super Bowl era at 54. Why? Because Tom Brady overtook the NFL all-time passing touchdowns record again today from Brees. Tom Brady is viewed as the indisputable King of the Castle, while Brees is forever-the-bridesmaid. The legacy of a player has never been more tarnished by a unit entirely out of his control than Brees. Brady has never suffered through a defense as inept and inexcusable as the Saints. Let this game serve as a bookmark. New Orleans defense will forever remain the sole reason Drew Brees will never get the credit he deserves.

Records and legacies aside, what a privilege it was to watch Drew Brees today. Flawless. In control. Decisive. Fans need to realize how rare this is; there will never be another one like him. And he proved that in today’s performance. Did any of you have the Saints being without Michael Thomas and Emmanuel Sanders in Week 7 on your 2020 bingo card? When the injury report came out, it was easy to surmise this game going one of two ways – a complete implosion, or vintage Brees firing on all cylinders with a supporting cast of nobodies. For the longevity of the season, it was enormously relieving to see it was the latter. A day with multiple QB sneaks by Drew Brees is a good day for the New Orleans offense.

With that, it’s only fair to award deserved accolades to Marquez Callaway. It took me a second to notice that Callaway’s jersey was the beloved No. 12 – previously of former Saint, Marques Colston. Well, the ghost of Colston was alive and well in Marquez Callaway in the Superdome; Callaway had a career-best performance with 8 catches for 75 yards, including four first downs. Brees and Callaway instantaneously got in sync and set the tone for the passing offense. Much unlike previous weeks, Brees looked confident and in control of his receiving corp, and all of them stepped up in the absence of massive offensive weapons. Of note, the Taysom Hill trick plays were only 50% as annoying this game, and he finally threw his first season completion under the disguise of franchise quarterback.

Great shot from @DavidGrunfeld of Marcus Davenport’s sack in the fourth quarter. pic.twitter.com/4No4htbZCw

The difference-maker on the Saints defense last week against the Chargers was the unrelenting pressure the front seven put on Justin Herbert; each time he was hurried, he threw the ball away or incomplete on a big play. This ferocious pass rush was painfully missing the majority of the game. It’s not so fair to the group of defensive ends and linebacker corp to harp on their defensive struggles; in a well-rounded defense, it wouldn’t have even been noticeable.

As the Saints defense is decidedly not so, the lack of hurries on Bridgewater in the pocket today stood out. Today’s game is a tally in the column for ‘Why the Saints Bet It All on Marcus Davenport’. His presence in the front seven proved a crucial difference-maker today. The majority of Carolina’s third down struggles against the Bears were attributed to the front seven and their consistent pressure. Today, they were aided by a bleeding secondary and a mainly non-existent pass rush that left Bridgewater with ample time in the pocket. Well, save for the time he was rushed to the sidelines to say hello to old friends:

Carolina held New Orleans offense – sans starting left tackle Terron Armstead – to just six points in the second half. Late in the fourth quarter, their defense gave them a chance to win the game. The Panthers faced a 3rd and 11 on the 39-yard line with a little over two minutes to play; they just needed a field goal to tie the score. When Bridgewater lined up in the shotgun formation, he quickly was met with Marcus Davenport tearing towards him with only Mike Davis to block in his path. Davenport torched past Davis and wrapped Bridgewater up for an 8-yard loss in his first sack of the season. Had that sack been a yard or two less, the Panthers likely hit the kick. Instead, the NFL-high 65-yard field goal fell just short of the crossbar.

Football games oftentime are a game of inches; nothing proved truer in this play by Davenport today. But, ultimately, it came in the final hour of a game that desperately could have used some consistent pressure on Bridgewater. There were just three tackles for losses on players besides the quarterback, and overall, the pass rush was much quieter than last week’s roaring front. Sometimes, though, all it takes is one good play. And Davenport’s sack proved to be monumental in New Orleans win.

The Ugly: The Secondary Stain on Brees’ Legacy

Save for the critical Davenport sack, the Saints barely won that football game. We were one yard short of an NFL-record field goal away from a consecutive overtime battle. The Carolina Panthers Achilles heel all season has been third downs and red zone conversions. In their loss to the Chicago Bears last week, Carolina was 3-of-13 on third down conversions, gained just 23 yards inside the Bears 20, and had one touchdown on three red zone trips; Bridgewater had 0 completions in the red zone, and they had three turnovers. In our Interview with the Enemy with Cat Scratch Readr this week, we focused on third downs – specifically, the impact Curtis Samuel’s presence would have on these conversions. As expected, they wreaked havoc on our unjustifiably undisciplined secondary. And the 7-9 Saints defense will be the sole reason we do not make the Super Bowl this season.

Carolina was 6-of-9 on third downs, and 2/2 on red zone trips – for reference, they’re ranked No. 28 in red zone conversions this season. On their opening drive, Curtis Samuel caught a 3rd and long deep up the middle for 22 yards. The subsequent drive, another inexplicable meltdown in zone coverage allowed for a 74-yard bomb to D.J. Moore for a touchdown. This incurred a fun stat; per NFL NextGen Stats, Moore’s catch had 6.15 yards of separation. New Orleans defense now holds the league-high five passing TDs with at least 6 yards of separation this season. The Panthers continued to exploit the glaring holes in coverage and Samuel preyed on the Saints third down defense. This is not a competitive unit. I don’t know what to diagnose at this point; early-season jitters cannot be to blame in Week 7. The talent, on paper, is astounding. Is it poor discipline? Coaching schemes clashing? Players who are a bunch of busts?

Those are hands @CurtisSamuel4__ @Panthers

This defensive showout is just inexcusable. New Orleans will head straight to 7-9 if the secondary cannot get it together. Did they have some critical stops with solid coverage? Absolutely. But all that progress is promptly erased by a massive bust the subsequent drive. The Saints are never in a position to win the football game in the final minutes; they’re more so desperately trying to fend off a game-ending play rather than just a disastrous one. Notably, or not, the defense hasn’t forced turnovers well this season at all. When the respective offensive unit is down all its stars, and they not only make it work, but play lights out with a practice squad cast, a nearly-healthy, supposedly stacked roster defense playing this poorly is the Saints’ gravest concern.

Drew likely will have to break yet another record game-winning drives to even sniff the playoffs with this defense. If the Saints don’t get to the Super Bowl this year, it will be entirely the fault of this secondary unit that reverted to pre-2017, sloppy 7-9 defense. It’s something that will be insurmountable against much more potent offenses later down the schedule. The outlook is not optimistic. For now, we can at least be placated by the fact that Drew Brees still has it in him to overcome a league-worst liability. Oh, and #NeverPunt.