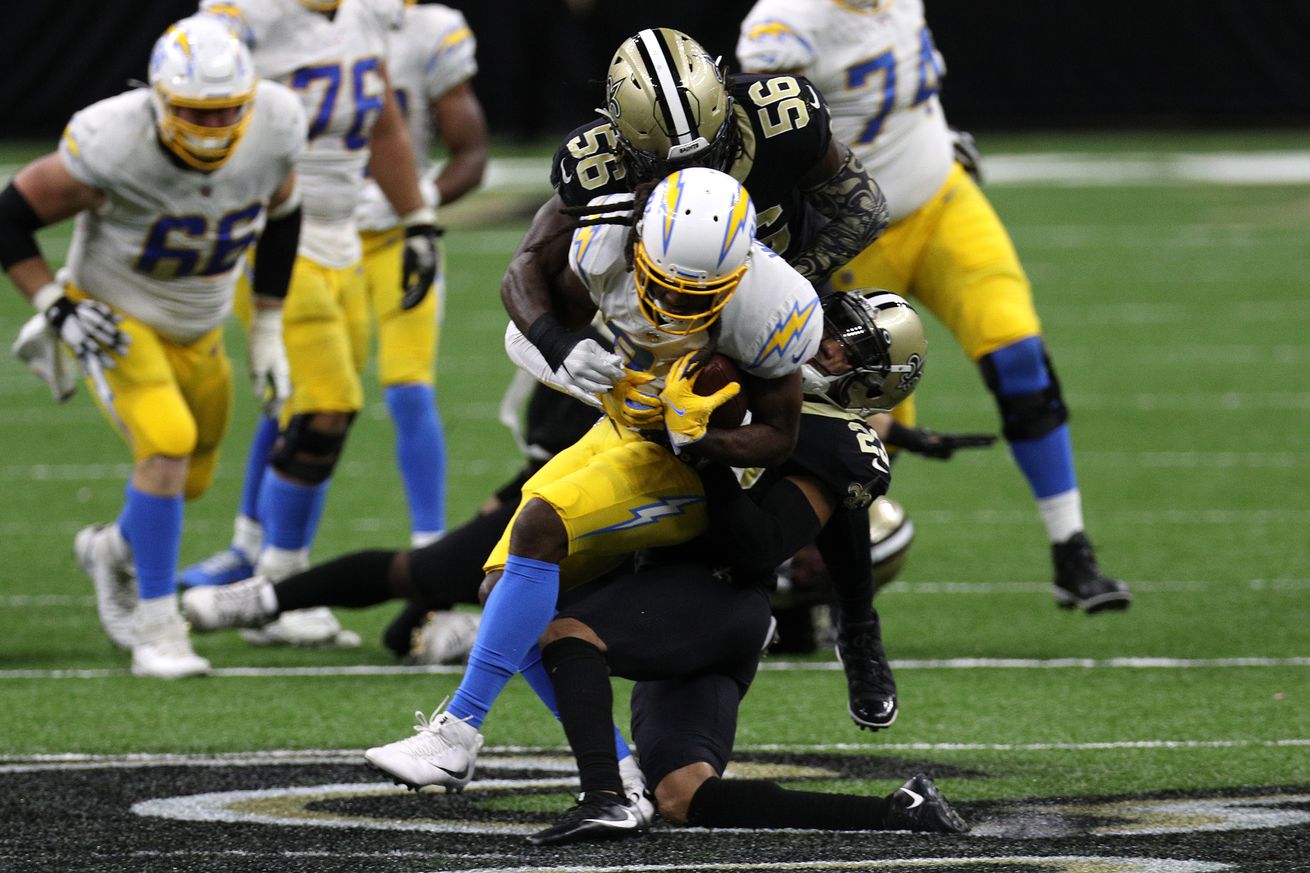 Marshon Lattimore wins the game on 4th down, pigs fly, and the Saints squeaked out a win in Monday Night’s overtime thriller over the Chargers.

I sit here, in shell shock, writing this whilst wearing a backwards Kamara jersey; after a mid-game jersey switch (and failure to look down), Brees rushed for a TD, and I sit now in my uniform for the remainder of the season. The New Orleans Saints leaned into the dramatics surrounding Drew Brees’ potential last Monday Night Football game of his career, and edged out a 30-27 win against the Los Angeles Chargers in an overtime thriller.

This game played out exactly as every game that felt the way this one did for the last decade – save for the final seconds where Marshon Lattimore finally decided he’d like to be considered elite again and actually won us the football game. Much like last week’s win against the Detroit Lions, New Orleans put itself in a 17-point hole this time to up the ante; they overcame a 20-3 deficit and while it wasn’t pretty, a win is a win. The Saints now sit at 3-2, and thanks to Nick Foles are the 1st place team in the NFC South. Of course, nothing can ever be easy in the Big Easy, so there’s a lot to unpack in New Orleans performance. Let’s get to it. But first, here’s a fun fact:

The Saints trailed by as many as 17 points in their OT win over the Chargers.

They are the 4th team to overcome a 17-point deficit on Monday Night Football since 2010.

Three of the four comeback wins have been against the Chargers. pic.twitter.com/Faq9UrUFwt

Trey Hendrickson was not letting UP @Saints pic.twitter.com/dAvW6i6vrH

Honorable Mention: The Dynamic Duo of Brees and Sanders

The absence of Marcus Davenport quickly became the most apparent missing puzzle piece to the Saints pass rush this season. Justin Herbert made a damning case for the Chargers starting role in his stellar outing, throwing for 264 yds, 4 TDs and 0 INTs. Los Angeles was never winning this game in the trenches; accordingly, and we’ll get to their scolding later, Herbert taunted New Orleans secondary on nearly every drive. The only way to stop the Chargers was to get to Herbert. And the Saints did exactly that.

Herbert was sacked three times; Trey Hendrickson recorded a critical 3rd and 12 sack late in the first quarter, followed by a split sack by Hendrickson and Jordan at the start of the second quarter, and Sheldon Rankins nearly stifled them in the redzone right before the half (the secondary promptly erased that gold star with a Hunter Henry TD). When you look past the sacks, the unrelenting pressure on the quarterback, and complete stuffing of the Chargers run game, was the difference maker for New Orleans.

Demario Davis and Cam Joran both led the team with 10 total tackles. Jordan had half a sack, 2 TFL and 1 QH. Davis had 3 QH, Rankins 2, Onyemata 1, Davenport 2 and Hendrickson 3

There were four noticeable moments of pressure on Herbert from the likes of Marcus Davenport, David Onyemata, Shy Tuttle, Demario Davis, Hendrickson and Jordan. All four times, Herbert threw either incomplete or out of bonds. Moreover, several of those plays had Chargers receivers deep downfield; New Orleans bewildering, unrelenting man coverage left those receivers plainly open. That, or singularly and inadequately covered. The pass rush ensured that Herbert wouldn’t even get the chance to toy with the Saints secondary on critical drives.

While the uncharacteristic number of dropped passes stood out, any negative sentiments on offense were drowned out by the electric connection between Emmanuel Sanders and Drew Brees. Sanders had an absolute day with 12 catches for 122 yards; several of those were the ever-elusive deep balls fans have been salivating for. More importantly, Sanders was clearly who Brees relied on in some of the game’s most critical moments. His first connection with Sanders was for 14 yards on a 3rd and 9, and Brees targeted Sanders three times in the fourth quarter drive – two of which were 15 yard catches – that tied the game with a Lutz field goal. Brees was in surgical mode, Sanders was well-studied in routes, and because of this, Michael Thomas’ absence wasn’t a defining factor in the Saints performance.

Honorable honorable mention for the vintage Brees’ rushing TD. And Marquez Callaway is a hidden treasure. We can stop worrying about the offense now. It’s time to pause, and simply enjoy the privilege it is to watch Drew Brees while we still can.

Hello, I have those air yards you ordered. pic.twitter.com/Zx7WZGQAJX

I see why MT was swinging on this secondary.

The Bad: Secondary-to-None Coverage, Emphasis on None

Speaking of the clutch sacks and pass rush that saved this game from a blowout at the hands of the secondary. Is the grass still green? All the progress by the unrelenting pressure that scattered Herbert and entirely stifled the running game was promptly erased every. single. time. by New Orleans continuously pitiful secondary. Why were we in man coverage with 15 seconds left in the game? We can add Gus Bradley to our honorary Saints team that includes Zane Gonzalez; had he not missed the first PAT of the game, he wouldn’t have even been in the position to miss the field goal that took us into overtime in the first place.

Luck is oftentimes a necessary factor for championship runs; that luck emphatically cannot rely on muffed kicks that are awarded prime field position by the secondary. Lattimore was ridiculously burned by Mike Williams on a 49 yard catch, and the Chargers played like they were the ones in the deficit with the amount of deep shots Herbert took. Our red zone defense received a solid F before we even hit halftime:

Justin Herbert throws his third TD pass of the first half! #BoltUp

Yes, Lattimore won us the game with back-to-back forced incompletions on 3rd and 4th and 6, but we never should have been in overtime in the first place with the amount of bombs we allowed. Herbert looked like he had Joe Burrow as his backup in college with the performance he put on – one that, frankly, deserved a win. As has been the perturbing tale, third down defense was as bad as expected. Keenan Allen made a 17 yard TD catch on a 3rd and 7, and the 29 yard catch by Mike Williams on 3rd and 1 with 0:15 remaining in the game should’ve easily been the nail in our coffin. Again, innumerable Thank Yous to the services of Gus Bradley today, he was an impeccable 13th man.

Our defense has decidedly regressed since last season, but hopefully, Lattimore sparked something in the secondary with his game-winning stop – he himself may have needed it the most. Full judgement for the secondary to be reserved for Janoris Jenkins’ return. Hard for Lattimore to play man on both Williams and Allen on 3rd and longs.

The Ugly: The Insulting Obsession with Taysom Hill

Briefly, just briefly, IMAGINE TOM BRADY’S REACTION TO GETTING BENCHED WITH 0:52 REMAINING IN THE GAME. Yes, Hill’s game-tying rush TD paid off, but Payton literally gambled the Saints season on Taysom Hill. It’s nothing short of insulting to Drew Brees to be taken out of a drive in the red zone after a surgical 64-yard drive, of which 52 of said yards Brees amassed in the air, including a 28-yard deep ball to Alvin Kamara. Brees drives them downfield, in his elite two-minute drill performance that is nothing short of exquisite, sets them up at the 9 yard line, and gets benched on 3rd and 4 for a trick play by Taysom Hill?

It begs an honest question: what message does this send to Brees and the rest of the team? That their revered leader is relegated to the sideline the second they reach the red zone? In a game where vintage QB sneak Brees emerges? Payton may think pennies of the timing of these calls, but the moments he chooses are painfully critical. The gamble in the final moments paid off; prior to that, Hill nearly threw an interception, gained 1 yard on a 3rd and 3, and dropped a pass from Brees. In what universe is that rewarded with a overtime-or-bust touchdown attempt?

The offense was fine, not overwhelmingly great, on Monday Night, but they certainly were never made better by the introduction of Hill. Particularly when Brees is a methodical, precise executioner who’s taken a bit of time to acclimate to the offensive flow this season. Why sit him when he’s finally firing on all cylinders? This experiment with Taysom Hill was a wild ride last season; Payton had me entirely fooled. It’s clear that the jig is up – his rush TD was the only positive play by Hill thus far this season. Opposing defenses are not remotely confused when Hill lines up under center anymore. And he’s not fooling anyone with a pass attempt after that strategy also failed this game. Make the man a tight end, and if Payton refuses to break up with this obsessive relationship, at minimum, stop pulling Brees at the end of critical drives. We might as well have Mike Glennon under center if we can’t trust Brees to “let it loose” in the end zone.

Sean Payton explaining to Alvin Kamara why it’s important he sacrifice his own touches so that Taysom Hill can live in the offense pic.twitter.com/sqjJpZce0U

At the end of the day, while we all need several drinks to recover from that…fun football game, the Saints pulled off a necessary win. And, at 3-2, not only are they above .500 for the first time since Week 1, but they now sit atop the NFC South thanks to Brady missing the day in elementary school where they learned to count to 4. All that’s left is to stop punching each other in the face!