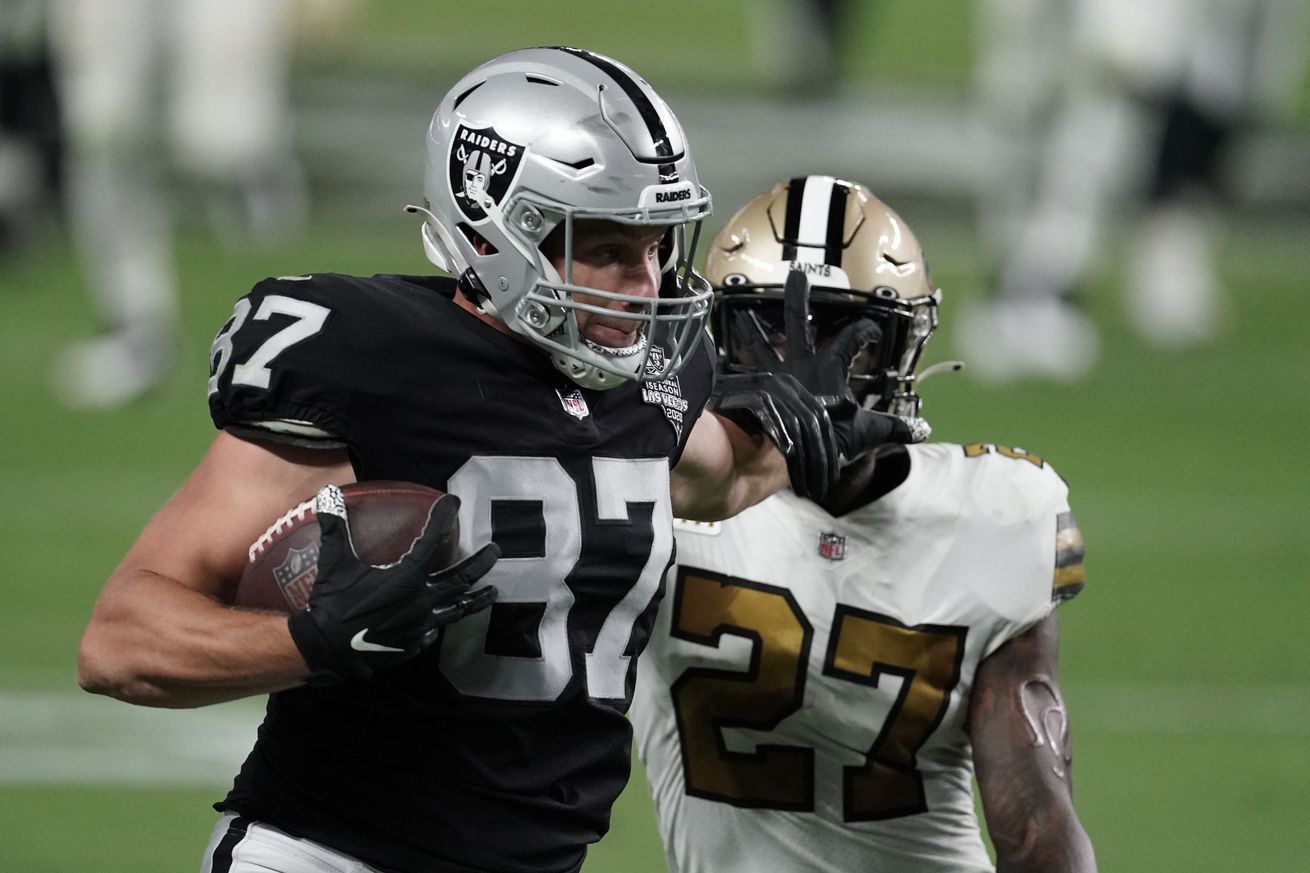 Yes, the “good” was a blip on the radar in the Saints’ Week 2 loss.

Who pissed off the ghost of Al Davis? Talk about taking the wind out of the sails after an exciting Week 1 win. The New Orleans Saints put on an absolutely putrid performance on Monday Night Football in their 34-24 loss to the Las Vegas Raiders – an anomaly for the normally exciting primetime Saints.

While it’s not quite time to ring the alarm bells, that loss was nothing short of pathetic and exposed a lot of holes on what was presumably an air-tight, deep roster. Bitter fans can skip the short positive section and wallow in the sorrows that were 90% of this game.

Nothing was more apparent during Monday night’s game than Alvin Kamara being ridiculously injured last season. Kamara was mercifully back to his spritely self with a stellar primetime performance, breathing the only sign of life into the Saints offense all game. New Orleans was absolutely failing to click offensively (a steep drop-off from the somewhat sluggish offense in Week 1) and Kamara was the only glue holding it together. It’s a sad night for the Saints when a running back is their leading receiver:

Alvin Kamara was the Saints’ leading receiver (95 yards) and his average depth of target was behind the line of scrimmage (-0.1) pic.twitter.com/RVWfw0PHoR

Kamara was simply elusive all game; early on (the first two drives, really), the offensive line did a good job at getting Kamara some holes to take off. He was decidedly the belle of the ball, followed by glimmers of promise from a burgeoning Tre’Quan Smith. Smith looked like he took notes from Michael Thomas when he absolutely bodied receivers down the field with a great early game catch. However, as the saying goes, you get by with a little help from your friends, and Kamara and Smith ultimately had no friends in the building on Monday night.

Per @ESPNStatsInfo: Brees has averaged 4.82 air yards on his passes so far this season. That’s his lowest through two games as a member of the Saints, and it’s the lowest by any QB through two games since Brett Favre in 2009.

As much as it hurts to write, Drew Brees looked like Mike Glennon the entire game, barring the blip on the radar drive with 5:00 left in the game. Though the offense as a whole was painfully missing a spark, signs of life, anything really, Brees is ultimately the leader that failed his team. Brees was uncharacteristically awful, blatantly missing throws, a puzzling interception, and just overall failure to inspire. Despite *retire yesterday* chants beginning to reverberate, I’m not remotely ready to throw in the towel – that one anomaly drive showing a bit of vintage Brees. With that said, the Saints are just off; they desperately need to rid themselves of an apparent hex that absolutely stifled them the entire game.

While Brees was decidedly bad all game, lack of a supporting cast certainly didn’t help. Remember mulling over the worst case scenario if Michael Thomas was injured in 2019? Well, we’re looking at a glimpse of that. Despite signing Emmanuel Sanders in what was viewed a critical offseason grab, Sanders has empathically failed to perform thus far. Sanders and Brees just do not have chemistry; quite reminiscent of the delayed Cook-Brees connection last year, Sanders is clearly not gelling with Brees – the anecdote may simply be time. New Orleans runs a complex offense that isn’t learnable in a day; though a bit bizarre that two veteran players can’t seem to get the hang of it, I’m hoping this is simply a repeat of Cook’s slow start.

Andrus Peat may have led Brees into that interception, but he should know better than that by now. That said, Brees’ blunder is fixable – though Michael Thomas’ absence was painfully apparent all game.

The Ugly: The entire defense

129 penalty yards? Did we re-sign Brandon Browner? New Orleans’ defense as a whole absolutely blew it on primetime with their pitiful performance. Some things are correctable; penalties are very much so. Dennis Allen is a much better coach than Monday’s performance would let on. I’m confident he will fix this. If he doesn’t, Aaron Rodgers is a lot better than Derek Carr. If Carr could carve up the Saints secondary this badly, Rodgers will be sitting on the sidelines eating his dinner by halftime.

Despite a lot of offseason buzz at the promising group of Saints safeties, that position group was nothing short of abysmal tonight. New Orleans had no game plan for Darren Waller, and Malcolm Jenkins was a horrible mismatch. Moreover, the third down defense was just atrocious. It’s never a good sign when you start cringing each time the opposing team lines up for 3rd and long – Saints fans know this feeling better than anyone. And yet, you just knew a 30-yard bomb was coming when Carr had 3rd and 18. The DPI call on Janoris Jenkins that ended the game was a perfect summary of the Saints gameplay on secondary tonight. Way too many DPI calls for anything other than a high school JV game.

Though the pass rush started strong, it completely fizzled out midway through the second quarter. Cameron Jordan was puzzlingly absent the entire game – a very rare occurrence. Allowing Carr to put up 34 points with a 3rd string o-line simply cannot happen should the Saints wish to remain contenders this year. The blitzing was Rob Ryan levels-reminiscent, and New Orleans was on the field for way too long to catch a breath.

All in all, while Drew Brees did absolutely nothing to assist a flailing defense, the unit, collectively, just blew it on a primetime stage. The silver lining? Better to get these jitters out of the way sooner rather than later, against a meaningless AFC matchup at that. The Saints have much bigger fish to fry this season, but there need to be a lot of changes immediately should they intend to make a Super Bowl run.

If nothing else, starting at 1-1 for the 8th season in a row is pretty on brand for New Orleans. They can ultimately recover from this loss.