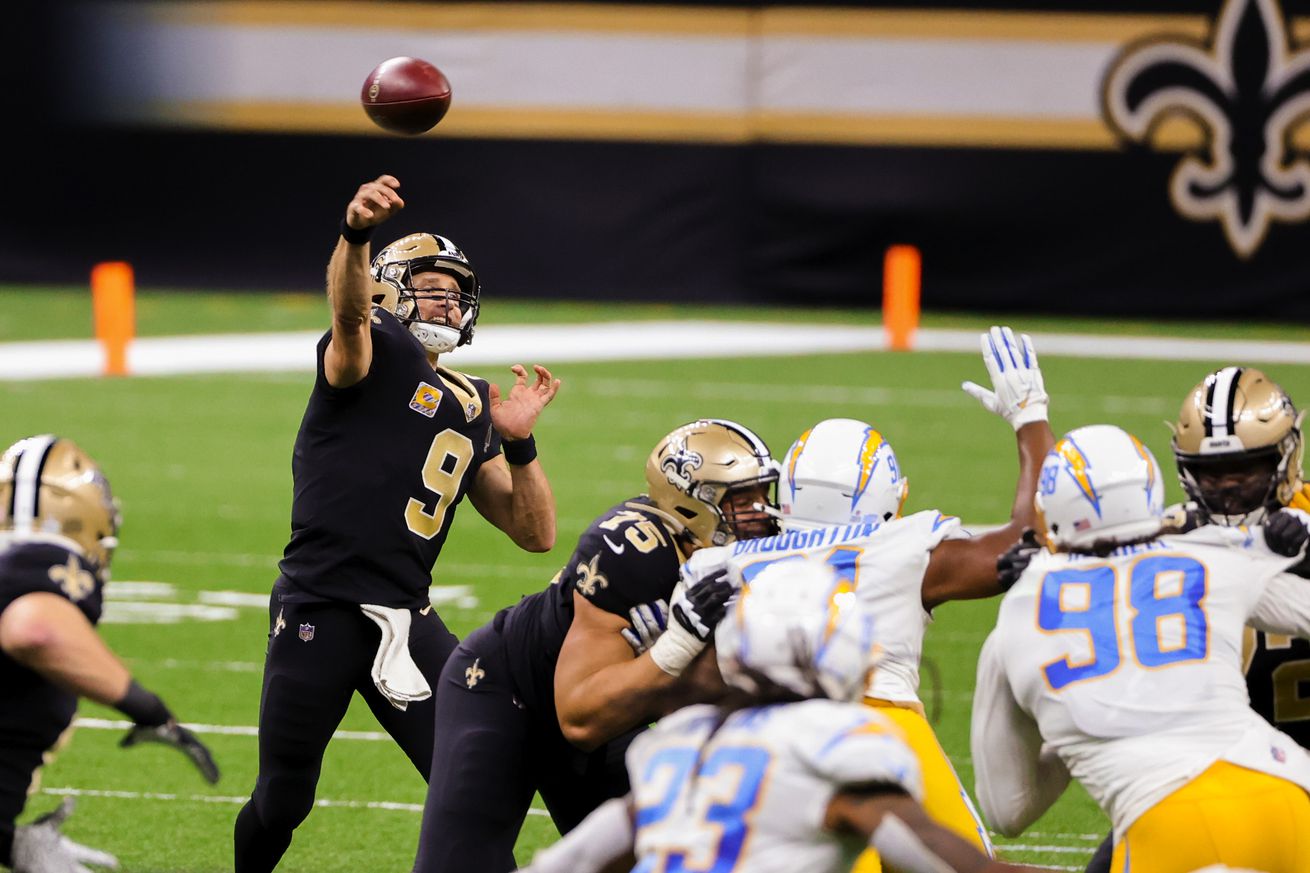 Brees continues his relentless charge on the NFL record books

Someone said: “Numbers never lie.” And that was a lie, because sometimes numbers lie. But they don’t lie all the time, and that’s the truth.

So, the Saints are making this comeback thing a habit huh? I must tell you: winning always trumps losing, and I’d rather see the Saints try to get better after winning ugly, than lament a heartbreaking loss. On Monday night, New Orleans repeated its exploit from Detroit two games ago: fall behind big, then go on an extended scoring run. In the Motor City it was 35 points in a row. On Monday it was merely 17 points to tie the game at 20.

The New Orleans Saints came into this season with a lot of expectations, namely that they would be the offensive juggernaut that they’ve had us accustomed to the Sean Payton era. But expectations have a way to self-inflate: The Saints have score at least 30 points in four of five games, lost to Green Bay by only seven points and were a fumble around midfield away from taking the lead in that game late in the fourth quarter. They led the Raiders by double-digit twice in Las Vegas before the defense forgot to guard Darren Waller. In other words, the NFL, as always, is a game of inches and bounces. The Saints could very well be 5-0 right now. They could also be 1-4, with losses at Detroit and against the Chargers. So, all in all, 3-2 at this juncture, with the team having a bye week to get healthier, atop the NFC South by virtue of a head-to-head win against the Buccaneers, that’s not the worst place to be.

Here are five impressive Saints numbers following their 30-27 escape from the bolts of the Chargers:

The number of game-winning drives in the 4th quarter or overtime by Saints quarterback Drew Brees, which ranks second in NFL history. Brees is only three behind Peyton Manning, who had 54 in his career. Four games behind Brees is Dan Marino (47) in third place, while Tom Brady is fourth with 46. Brett Favre rounds out the top five with 43 such drives.

Brees is not having his most memorable season through five games in 2020. However, we would be remiss if we forgot just how much greatness that man has regaled us with on the football field, especially in a Saints’ uniform. With the Saints getting into the habit of trailing before coming back to win this season, Brees could have yet another NFL record on his Hallf of Fame mantle before this regular season is over.

That is the exact number of wins for Drew Brees during his NFL career when his team had trailed by at least 17 points at any stage of a game. These two wins include Monday’s victory against Los Angeles, one in which the Saints trailed 20-3 at one point. In fact, Brees entered the night 1-48 in such games. So, in 49 games in which his team had trailed by 17-plus points, Brees’ winning percentage was 2.04%. And yet yesterday, he and the Saints defied the odds and what was a most improbable win. After all the bad luck that the Saints have had over the years, we’ll take it.

When the Chargers let Drew Brees go after the 2005 season, they probably did not expect to face him anytime soon. In fact, they may have thought that his NFL career was over. Contrary to their beliefs, Brees resurrected his career in New Orleans and has since faced the Chargers four times. And four times, Brees has come out on top against his old team. In addition to Monday night’s win against Los Angeles, Brees and the Saints beat the then-San Diego Chargers in London in 2008 (37-32), in New Orleans in 2012 (31-24) and in San Diego in 2016 (35-34). Even though the NFL is a business, the way the Chargers unloaded Brees after he had suffered a brutal injury to his throwing shoulder was unpalatable. It is a bit of poetic justice that San Diego and now Los Angeles have never gotten the better of Brees since, while he went on to build a Hall-of-Fame career.

The number of sacks for the man who leads the Saints in sacks through five games this season: one Trey Hendrickson. How many of you remember how the Saints got Hendrickson? He was a third-round selection by the Saints out of Florida Atlantic University (FAU) in the 2017 NFL draft. Here is what is remarkable about that: Hendrickson was selected with a pick acquired in the Saints’ trade of Brandin Cooks (remember him?) to the New England Patriots. While Cooks has since played for the Pats, Rams and now Houston Texans, Hendrickson has slowly but surely played himself into a viable option at defensive end opposite Cam Jordan. At only 25, Hendrickson is entering his prime and is in his first contract year. If that is motivation for him to play well, it certainly shows. Jordan has only 1.5 sacks so far this year and as a team New Orleans only has 13 sacks. With Marcus Davenport coming off an injury and the whole defense playing mediocre football to this point, Hendrickson has been a definite bright spot for New Orleans in this young season.

Until he misses, Saints placekicker Wil Lutz deserves to be mentioned in this piece. Through five games, Lutz has a 100% success rate on both field goals and extra points. The Saints’ kicker is 9-for-9 on field goals attempts, which includes an effortless 53-yard field goal on Monday night against Los Angeles that would’ve been good from at least 60 yards out. He is also 18-for-18 on extra points. Every now and then a kicker just gets in a groove, and right now Lutz looks like a player who can’t miss. Let’s hope this trend continues as the season goes on, but so far, so very good for the Saints.