Here’s an interesting scenario: the New Orleans Saints’ need for a new wide receiver is so obvious that the latest mock draft over at Draft Wire has them trading up a few more spots to address the problem. Draft Wire’s Luke Easterling envisions the Saints being too anxious to wait for their receiver of choice to make it to them at No. 16, so he’s projected a trade with the Minnesota Vikings to get New Orleans on the clock at No. 12, giving up a mid-round pick along the way (the Saints could barter their third round pick at No. 98 or a fourth rounder at No. 120).

And that puts New Orleans in position to take the first receiver off the board: Ohio State Buckeyes prospect Garrett Wilson. Here’s what Easterling wrote of the move:

“With Stingley and Hamilton both off the board, it wouldn’t be surprising if the Vikings tried to move back and grab an extra pick instead of reaching here. This year’s loaded receiver class hasn’t been touched yet, and a team like the Saints could leap up the board to get first dibs.

Wilson’s explosiveness and big-play ability would be the perfect pairing with a physical possession target like Michael Thomas, giving Jameis Winston a strong 1-2 punch. Moving up four spots shouldn’t cost the Saints much more than a mid-round pick at this point in the draft.”

I’ve been begging for the Saints to invest in one of the top rookie receivers all offseason, so this is great. Wilson is a tremendous prospect who could help Winston play the best football of his career while taking pressure off of Michael Thomas to do everything on his own after being two years removed from his last healthy game.

Personally, I don’t see Wilson as the draft’s best receiver — Chris Olave outplayed him for three years in the same offense at Ohio State. But I won’t complain if Wilson ends up with New Orleans instead. Both of them are great prospects who could immediately help the Saints offense get back on its feet. I just like Olave better for his greater experience (having appeared in 47 games against Wilson’s 33) and stronger body of work in college.

So what does Easterling have the Saints doing with their other first-round pick? He predicts New Orleans to stay put at No. 19 and take the best available prospect, and they end up seeing Northern Iowa left tackle Trevor Penning fall to them:

“After trading up to land a big-play receiver, the Saints keep building around Jameis Winston with this pick, landing a potential franchise left tackle to replace Terron Armstead.

Penning still needs a ton of refinement when it comes to his technique, but his physical traits give him tons of potential. It’ll take some patience and quality coaching, but Penning could develop into a dominant force at the next level.”

Left tackle is one of the team’s greatest areas of concern after receiver, so this would be a good pick — even if Penning isn’t ready to start right away. The Saints have paid James Hurst well to hold down that job if needed, and that could buy time for Penning to work on his mechanics in practice so he can better harness his athleticism. And, hey, maybe he’s further along than we think and wins the starting job in training camp — allowing Hurst to go put out another fire and maybe push Cesar Ruiz for the starting gig at right guard.

What’s evident from this mock draft is that the Saints have options, and they can turn to other directions to address their needs. If one door closes another one could open. That’s why the Saints made the trade for a second first-round pick in the first place.

What the Saints still need heading into the 2022 NFL draft 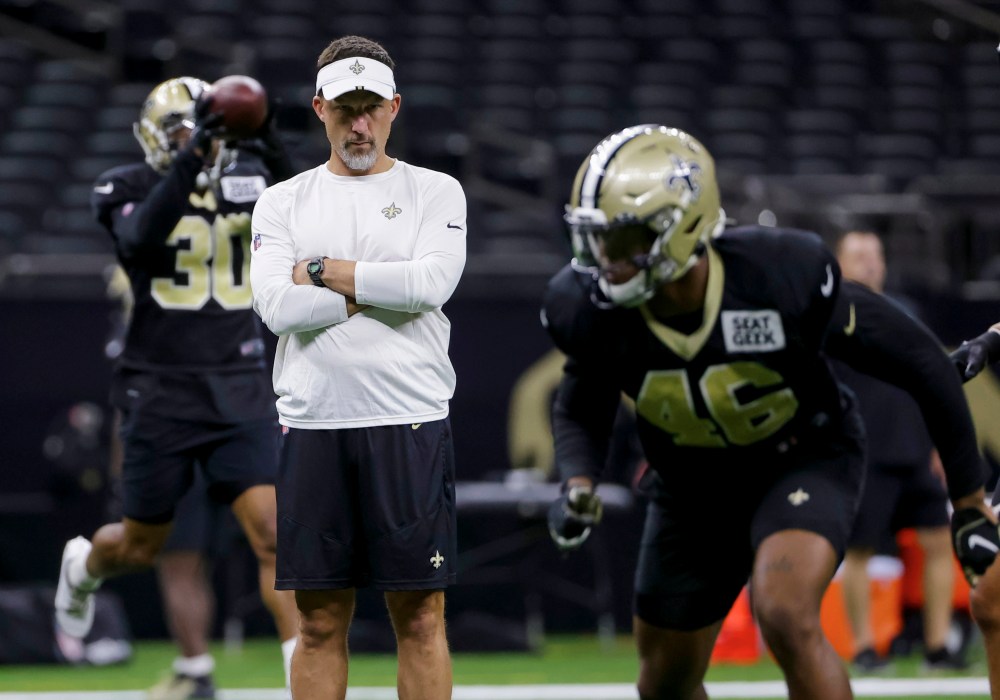