For the second time in two weeks, a Pro Bowler from New Orleans agreed to sign with the Saints. Following Tyrann Mathieu‘s agreement, the team is signing Jarvis Landry. 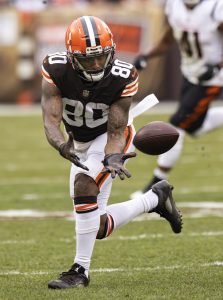 The former Dolphins and Browns wide receiver confirmed his decision Friday on Twitter. It’s a one-year deal, Aaron Wilson of ProFootballNetwork.com tweets. Landry visited the Saints before the draft and will now join a receiving corps that, if Michael Thomas can stay healthy, could be formidable. The team has made two major investments at the position this offseason, with the Landry addition coming after a trade-up maneuver for Chris Olave.

Absent Thomas last season, the Saints deployed perhaps the league’s worst receiving corps. The team did not have a 700-yard receiver in 2021. This year’s crew now features the NFL’s single-season reception record holder, a five-time Pro Bowler, and a top-15 pick. The Saints also re-signed former third-rounder Tre’Quan Smith and still have 2021 receiving leader Marquez Callaway under contract. This corps stands to give Jameis Winston a better chance of succeeding after ACL rehab.

Connected to the Falcons and Ravens as well, Landry had been in the mix to return to the Browns. But that door closed recently, with Cleveland — which made Landry a cap casualty in March — intent on seeing how its younger players perform around Amari Cooper. The Saints opted for veteran stability, and the LSU product will be positioned as a key contributor.

Landry, 29, is coming off his worst season as a pro — 52-catch, 570-yard campaign. But Baker Mayfield‘s shoulder injury did well to sink the Browns’ passing attack. Battling an MCL injury last season, Landry also missed five games. Prior to 2021, Landry served as the top receiver on a 2020 Browns team that snapped a 17-year playoff drought. He also has three 1,000-yard seasons and five 900-yard slates on his resume. Used as a slot player in Miami, Landry also has compiled 110- and 112-catch seasons as a pro. The latter showing led the NFL in 2017, leading to the Dolphins franchise-tagging Landry and trading him to the Browns.