Despite working out multiple linebackers who have been steady starters over the past two years, the Saints are reuniting with Kiko Alonso. The well-traveled defender has not played since 2019, but Ian Rapoport of NFL.com notes (via Twitter) the Saints are giving him another shot. It’s a one-year deal, per ESPN.com’s Katherine Terrell (on Twitter). 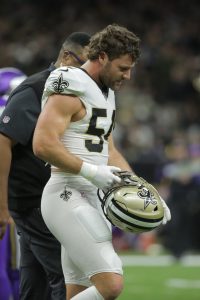 Going into what would be his age-32 season, Alonso looks to have shown enough at his Thursday workout to vie for a depth role. Once a longtime starter, Alonso has not played since suffering an ACL tear in New Orleans’ wild-card loss to Minnesota in January 2020.

New Orleans also worked out Anthony Hitchens and Jon Bostic on Thursday. Both players have been starters for the past several years. Alonso is the oldest member of the trio to participate in this audition. While the Oregon alum was with the Saints in 2019, he worked as a starter in just four of the 13 games he played with the team. He will follow former Vikings and Eagles defender Eric Wilson in being a Saints veteran linebacker addition this year.

Alonso stormed onto the NFL scene in 2013, producing a standout rookie season that pushed Sheldon Richardson for Defensive Rookie of the Year honors (a 23-19 vote). The first of Alonso’s two ACL tears as a pro stalled that momentum, knocking him out for all of the 2014 season. He then embarked on a rare NFL path, becoming a four-time trade piece.

The Bills traded Alonso to the Eagles, who dealt him to the Dolphins after one season. With Miami, Alonso was a steady starter. He started 46 games with Miami and signed a four-year, $28.9MM extension during the 2017 offseason. During their rebuilding year, one that later became the subject of multiple NFL investigations, the Dolphins made Alonso one of the many veteran exits by dealing him to the Saints for linebacker Vince Biegel. The Saints dealt Alonso to the 49ers in a trade that brought back Kwon Alexander; the 49ers cut Alonso shortly after that November 2020 swap.

With the Saints in 2019, Alonso made 31 tackles (two for loss). Since Alonso’s last regular-season game, the Saints drafted Zack Baun in the 2020 third round and Pete Werner in the 2021 second. The latter profiles as a better bet to start alongside Demario Davis this season. Wilson, 28, started 15 games with the Vikings in 2020 but was cut midway through his lone Eagles season. The sixth-year veteran is pushing for a starting job as well. Alexander, a regular Saints starter from 2020-21, is now with the Jets.