The Saints are adding a veteran cornerback to their roster. No, it’s not Richard Sherman or Xavien Howard, but it’s still a player who should be expected to make a significant impact. According to veteran NFL reporter Josina Anderson, New Orleans will sign Brian Poole to a one-year deal tomorrow (Twitter link). 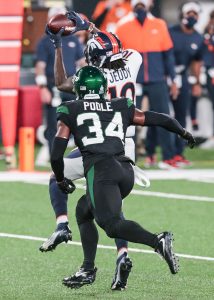 Poole signed with the division-rival Falcons as a UDFA in 2016, and despite his undrafted status, he served as the club’s primary nickel corner over his three seasons in Atlanta. The Falcons opted not to tender him as a restricted free agent following the 2018 campaign, and the fact that Pro Football Focus’ advanced metrics graded him as the No. 81 cornerback in the NFL out of 110 qualified players that season justified the decision. He also ranked as bottom-three corner in success rate, per Football Outsiders’ charting data.

But the Florida product hooked on with the Jets shortly after being non-tendered by the Falcons, and he elevated his game with Gang Green. Operating primarily as a slot defender, just as he did in Atlanta, Poole allowed a 71.6 passer rating in 2019 and a 64.7 rating in 2020. PFF gave him strong coverage grades in both seasons.

The thought has been that the Saints would be looking for an outside corner to line up opposite Marshon Lattimore and to serve as a replacement for cap casualty Janoris Jenkins, but as Poole’s experience has mostly been at nickel, he does not fill that void. If New Orleans does not make any other additions, perhaps Chauncey Gardner-Johnson, who has generally played well in the slot, will be added to the mix for the team’s CB2 role.

Poole’s 2020 season was cut short due to shoulder and knee injuries. Given that, and in light of his extended stay on the open market — this is the first reported interest in him this offseason — his contract with the Saints is almost certainly light on guaranteed dollars. He does have some chops, though, so a strong showing in 2021 may lead to a lucrative multi-year pact.