We shouldn’t expect the New Orleans Saints to stop tweaking their quarterbacks depth chart after re-signing Jameis Winston. His two-year contract sets him up to be a bridge between the team and the next face of the franchise — and while he could play well enough to earn that opportunity himself, it’s also possible the Saints are working to find his replacement. In his latest 2022 NFL mock draft for ESPN, Mel Kiper has New Orleans in a fine position at No. 18 overall with every draft-eligible quarterback still on the board.

That means the Saints took the best available passer, which in Kiper’s opinion was Pitt Panthers prospect Kenny Pickett. Here’s what he wrote of the match:

“The Saints tried and failed to add Deshaun Watson, so are they definitely committed to Jameis Winston now? I don’t think so. If the board shakes out this way — with all of the passers available — why shouldn’t they take Pickett? He’s the most NFL-ready of the bunch, leveling up last season with 42 touchdown passes and just seven interceptions. He is super accurate. He understands how to run an offense and lead a team. He could be the Saints’ future.

This is a strange quarterback class, and the range on when Pickett and Malik Willis come off the board varies from everyone I talk to in the league. No one knows for sure. I would not be shocked if either of them fell into New Orleans’ lap here.”

Kiper is low on this quarterbacks class as a whole — just two other rookies joined Pickett in the first round, with the Pittsburgh Steelers selecting Liberty’s Malik Willis at No. 20 and the Detroit Lions ending the day with Ole Miss quarterback Matt Corral at No. 32. Maybe that’s how it plays out in reality. At this point, Kiper is guessing just like the rest of us.

It would be fascinating to see how long the Saints kept Pickett on the bench in this scenario. Winston had some bright moments before his injury last year, sure; but if first-year head coach Dennis Allen chooses to pick a quarterback in the first round, he’s tying his career to that player’s fortunes, and it’ll be hard to keep his handpicked passer sidelined if Winston falters. And in this specific setup, Pickett would be a 24-year-old rookie once the season starts in September. Asking him to sit out a full season as Winston’s backup would mean he wouldn’t start a game until after his 25th birthday.

That’s unusual by NFL standards. For context, Winston himself just turned 28 in January. The list of quarterbacks who started games last season before turning 25 includes Kyler Murray and Lamar Jackson (both 24); Justin Herbert, Jalen Hurts, and Mac Jones (23); Trevor Lawrence and Justin Fields (22). Limiting the number of games Pickett would get to play in his athletic prime could have an adverse effect on his overall growth as a passer, lowering the ceiling of his potential.

It’s not as if Pickett could sit on the bench and learn because he’s basically learned all he could up to this point, having returned to college as an overdeveloped prospect (relative to his level of competition), doubling his career touchdown passes total. It’s worrisome that he started for so long at the college level but didn’t produce until his final season.

And benching Winston outright in 2022 wouldn’t be the best use of resources after guaranteeing him $21 million. It would be a tricky situation to navigate, at least in the short term. Is Allen and his staff equipped to solve that riddle? We’ll just have to wait and see.

But we know Pickett is on New Orleans’ radar; the Saints sent quarterbacks coach/passing game coordinator Ronald Curry to watch him throw at Pitt’s pro day this week, and as Kiper observed, they are in a good position to draft their quarterback of the future. Winston makes that less of a priority, but so long as he’s playing on a short-term contract and no young prospect is being coached up behind him, this is going to remain on the back burner for New Orleans. 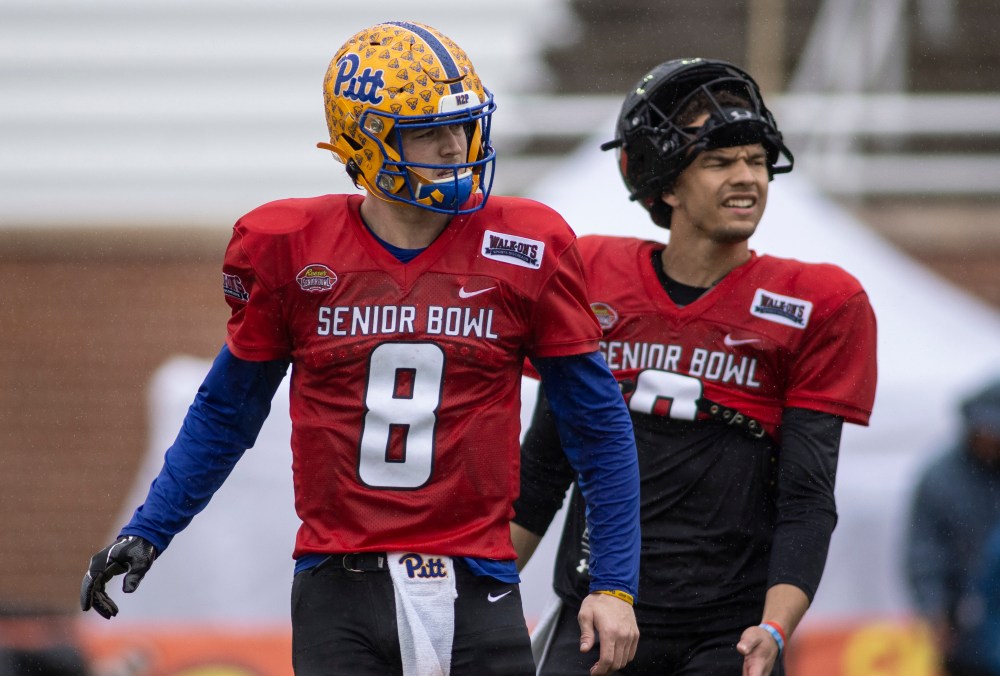