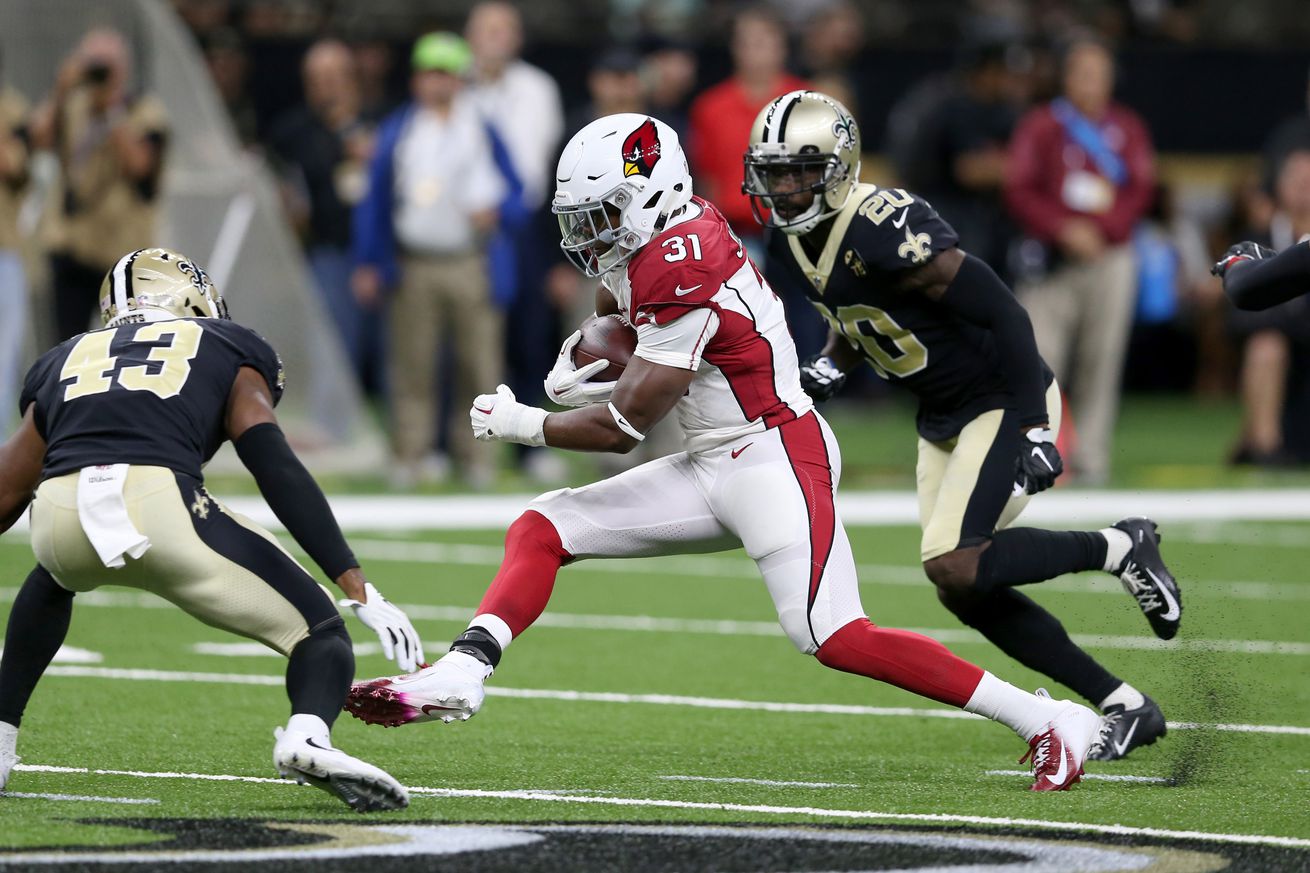 A Kamara trade and a trade up for a quarterback.

We’ve already done two different mock offseasons so far, and you should go back and read them. If you haven’t – you’re missing out. In fact, why are you still here? You’re being really weird…

In any event, let’s do another, and let’s get even crazier this time. Are you ready? Here we go.

Let’s have the Saints make all of the same releases as in the most recent mock offseason, releasing Patrick Robinson, Nick Easton, and Craig Robertson, and restructuring/extending Drew Brees, Larry Warford, Janoris Jenkins, Kiko Alonso, and Sheldon Rankins. In total, the Saints have $37.7 million in cap space so far.

Now we can have some fun.

Let’s keep the Oakland Raiders signing Taysom Hill at the cost of the 12th overall pick in the 2020 NFL draft. Let’s also keep the Saints adding CB Darius Slay from the Lions via trade, but instead of paying with the 24th overall pick, let’s say instead the Saints trade RB Alvin Kamara to the Detroit Lions for Slay and the 35th overall selection.

To replace Kamara, the Saints sign RB David Johnson to a one-year, $5 million dollar contract after Johnson is released by the Arizona Cardinals. Between Thuney and DJ, the Saints “only” have $22.7 million left in cap space.

David Johnson does not appear to be the Top-3 running back he was just a few short seasons ago, but the upside is still there and he’s proven to be exceptional as a runner and receiver. Even at 28, Johnson welcomes the opportunity to come to New Orleans on a one-year deal to try to re-establish any value he might have left in the NFL and knows what a Sean Payton offense could do for his numbers.

Since 2015, only Alvin Kamara (6) and Christian McCaffrey (6) have more games with both a rushing and receiving TD than David Johnson (5). pic.twitter.com/XmxriZptjA

Next the Saints sign FB/RB CJ Ham from the Minnesota Vikings to a three-year, $11 million dollar offer sheet to replace the retired Zach Line at fullback while also helping provide a bit of running back insurance behind Johnson and Latavius Murray. The Vikings need to prioritize their money elsewhere, so they don’t match the Saints’ offer sheet and New Orleans brings in Ham.

The league average for a FB is just 11.4% (per @ArifHasanNFL)

Meanwhile, the #Vikings are using a FB at an astounding 40% rate w CJ Ham paving the way w the #1 ranked rushing attack

While the rest of the NFL zigs, Mike Zimmer continues to zag w a physical, old-school approach. pic.twitter.com/jWDmxDCrA4

The Saints then eat up another $8.5 million of their remaining cap space space by signing Joe Thuney’s former teammate with the New England Patriots, LB Jamie Collins, on a two-year $17 million dollar deal. This leaves the Saints with a little over $13 million left.

Last year for New England, Collins managed three interceptions, three forced fumbles, seven sacks, ten tackles for loss, and 80 total tackles. Pro Football References gave Collins an “Approximate Value” of 15 for the year. To put that in perspective, AJ Klein, who the Saints let walk in free agency, had an Approximate Value of only 7 in 2019. Going from Klein to Collins should be a massive improvement.

JAMIE COLLINS IS BACK! #Patriots pic.twitter.com/FRxMyiky3g

Jamie Collins with the most disrespectful INT return. Started jogging at the 30

Next, in place of David Onyemata, the Saints sign DT Jordan Phillips to a three-year, $18 million dollar contract, with Phillips coming off a career year that included 9.5 sacks for the Buffalo Bills. We’re down to $7 million.

With only Jared Cook and Josh Hill on the roster, and Jared Cook entering his age 32 season, the Saints sign pass-catching tight end Eric Ebron to a four-year, $27 million dollar contract that contains only a $4 million dollar cap hit in 2020.

Eric Ebron are you kidding me?!? That’s a one-handed TD. Ridiculous!

Finally, at wide receiver, the Saints sign Demaryius Thomas to a one-year, $3 million dollar contract to come in and help out Michael Thomas. Thomas finally has help at wide receiver, albeit an older veteran. Still, between Demaryius and Ebron – along with Jared Cook – there are plenty of other options now in the passing game.

Another TD for Demaryius Thomas, his second of the night. He has 7 receptions for 87 yards and 2 TDs tonight. Looks like he’s ready for the season. pic.twitter.com/eD77EwtW6E

As we enter the draft, let’s assume the Saints free up just enough money to sign their draft picks by restructuring a contract like Michael Thomas, Thomas Morstead, or Wil Lutz.

After all of their moves in free agency, it would seem at this point the Saints are in a position where they don’t have any obvious needs heading into the 2020 NFL Draft. So what do they do with the 12th overall pick? They trade up, of course.

Higgins is viewed as one of the best wide receivers in the 2020 class not named Lamb or Jeudy, and he would bring an immediate upgrade at wide receiver to pair with Thomas over the Saints in-house options, including Demaryius Thomas.

This throw and catch is ridiculous.

The Saints then turn around less than ten picks later with the 35th overall pick, the pick the Saints received from Detroit in the Kamara deal, and they select Utah running back Zack Moss as a potential long-term replacement for Kamara. Moss has the potential to be an elite NFL running back, both as a runner between the tackles and catching passes out of the backfield.

In the fourth round, the Saints select LSU Guard Damien Lewis, to pair with fellow former-LSU Tiger Will Clapp to be the primary backup offensive linemen after the release of Nick Easton.

That means thee Saints have improved the left guard position by going from Peat to Thuney. They also have rookie Damien Lewis for depth along with Will Clapp. At linebacker, the Saints move from Klein to Jamie Collins and can expect Alex Anzalone to come back from injury as well. At wide receiver, the Saints bring in Clemson star Tee Higgins and veteran Demaryius Thomas to a group that already contains the 2019 Offensive Player of the Year in Michael Thomas.

At running back, the Saints lose Pro Bowler Alvin Kamara, but bring in Pro Bowler David Johnson plus CJ Ham and rookie Zack Moss to work with Latavius Murray. Johnson is only under contract for one year, so he doesn’t block the long-term plan for Zack Moss to be your feature back.

In the secondary, the Saints have a trio of Pro Bowlers at corner in Marshon Lattimore, Darius Slay, and Janoris Jenkins. At safety the Saints lose Vonn Bell, but with three talented cornerbacks, the Saints are able to play CJ Gardner-Johnson at strong safety next to Marcus Williams. On the defensive line, the Saints bring in Jordan Phillips to help create pressure from the middle with Cam Jordan and Marcus Davenport on either edge. At tight end, the Saints add Eric Ebron into the mix that already contains Jared Cook and Josh Hill.

And then at quarterback, the Saints have future Hall of Famer Drew Brees for one more year, while the team takes it slow and eases Tua Tagovailoa back from injury as the potential franchise quarterback of the New Orleans Saints.

What do you think of this mock offseason? Has this been a series you’ve enjoyed? Should we do another, or is this good enough? Share your thoughts in the comments. Send me presents.