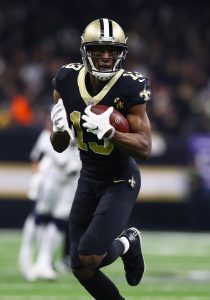 Thomas’ ligament tear cost him much of 2020. Unfortunately, it’ll also sideline him for a chunk of the early fall. This marks yet another roadblock for the Saints star.

Entering 2020, Thomas had missed just two contests in his pro career. Then came the high ankle sprain in Week 1. He was limited to just seven games and repeatedly clashed Saints brass, leading to trade speculation before the fall deadline.

To recap: The Saints handed Thomas a one-game suspension for striking a teammate. Then, he missed time with a hamstring injury. All in all, Thomas finished out the regular season with just 40 catches for 438 yards. He did manage to catch five passes for 73 yards and one score in the Saints’ playoff win over the Bears, however.

The acrimony has even led to speculation that the Saints would release him, even though terminating his five-year, $100MM deal would have left the team with an absurd dead money hit. Instead, the Saints are sticking with Thomas, who agreed to a cap-friendly restructure earlier this year. Now, they’ll keep their fingers crossed as the 2021 season draws near. They’ll also do their homework on the free agent market — Mike Garafolo of NFL.com (on Twitter) hears the Saints will audition WRs in the coming days.