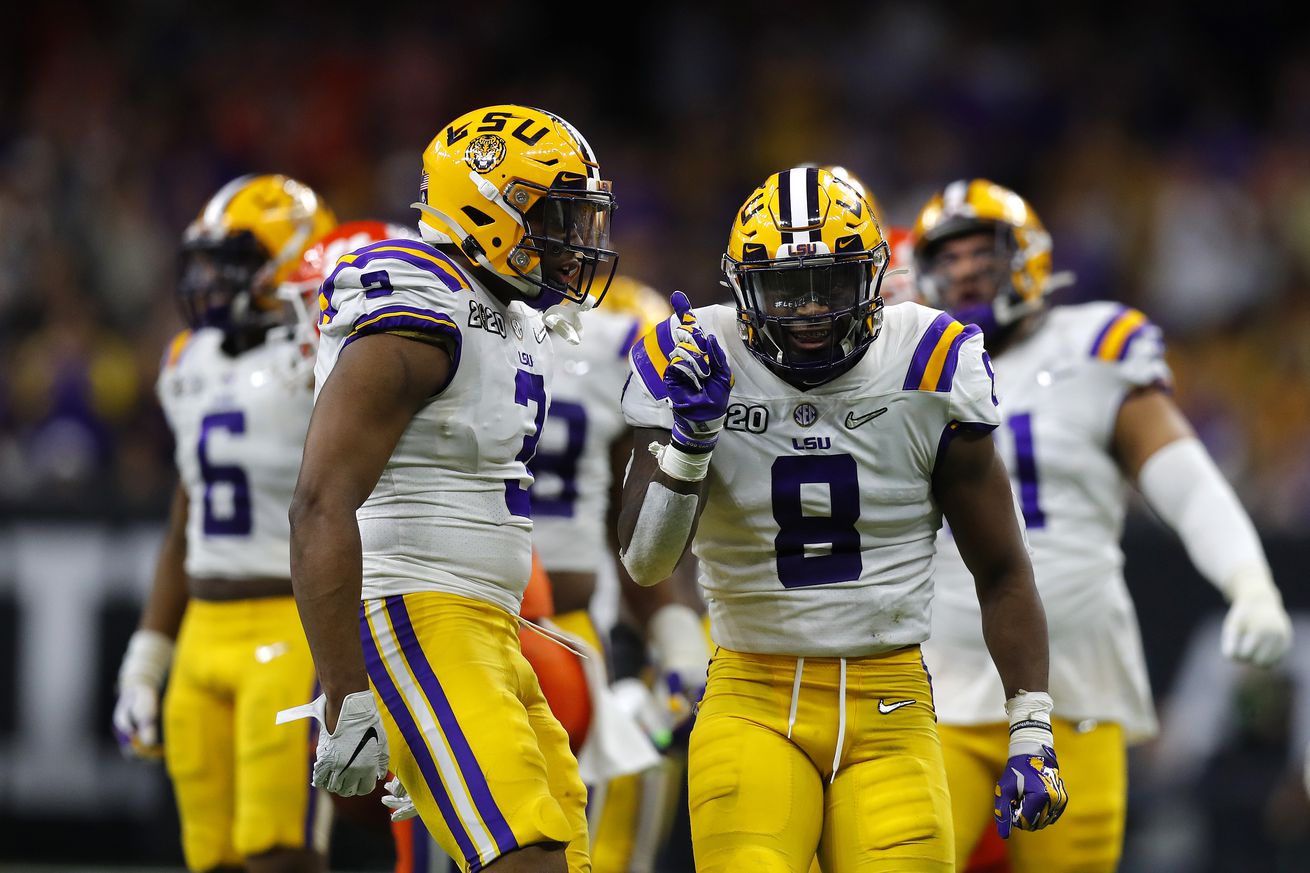 It always feels like waiting for free agency to calm down is the right time to start posting mock drafts. However, I wanted to dive in just before the proverbial “second wave” of signings swoops in. For the exercise, I went in as if the Saints closed up shop on free agency after Wednesday’s business. That means Drew Brees is on contract, Taysom is tendered, Malcolm Jenkins is back, Vonn Bell, PJ Williams, and others are out, and the Saints are on the clock.

No trades in this edition and judging by our CSC free agency tracker, biggest needs remaining we will try to address are: WR, G, LB and CB.

Weighed in at the NFL Combine around 6’0”, 229 pounds. Perhaps a bit undersized for what the Saints like at the second level. But their recent emphasis on athleticism at the second level, you will not get much more athletic than Patrick Queen. In my simulation, Isaiah Simmons was rightfully off the board early and Kenneth Murray found himself headed to Jacksonville at pick 20. That left me with the very welcome selection of LSU’s Patrick Queen. Now, we will start by ignoring the false stigma that New Orleans actively avoids LSU players and instead look at exactly why Queen is a fit.

Queen’s athleticism is, of course, perfect for what the Saints are looking for. Showing interest in both Jamie Collins and Cory Littleton tells us that they are looking for linebackers that can cover and help limit the passing game without being a complete liability in run defense. While Queen could stand to be a bit more consistent as a tackler, he shows you that he already has that in him. He is a three-down guy that can be disruptive in many different ways, processes information quickly, can run with RBs and bump with TEs in the passing game, and can blitz when called upon. He would be a great addition to the presumed starters this year of Demario Davis, Alex Anzalone, and Kiko Alonso. With Anzalone and Alonso carrying health concerns into 2020, Queen is someone that can begin behind the season learning behind them, but very well find his way to a starting role by season’s end.

Queen did tweak his hamstring at the NFL Combine while running his 4.51 40. But according to Ian Rapoport, it does not appear to be serious. I chose to go LB here because interior offensive line and wide receiver are very deep, and the cornerback need to me feels like depth. But worry not. You do not have to wait long for a WR to hit this list.

Told ya. With the 88th overall selection, the Saints stick in the SEC but this timing heading east grab Florida Gator Van Jefferson. Jefferson (6’1” and 200 pounds) is probably class’s best route-runner. Extremely fine-tuned technique, quick feet, precise placement, and understanding of leverage. Everything he does before the ball gets to him is pretty well polished. However, he lacks some of the RAC ability you may like to see in this offense. But we have seen Michael Thomas succeed despite not being known as an after the catch threat. Jefferson has the ability to put himself in good enough position out of his breaks, that he can benefit after the ball arrives.

Jefferson caught 6 touchdowns this past year only 49 receptions, averaging 13.4 yards per catch.

One knock is that he is 24 years old already and so he may be at his developmental capacity. But if your capacity is already that of an NFL-caliber route-runner who could just use some savvy tools to improve, I am far from mad at that. The Saints get a guy that could develop into a nice WR2, but will likely start off in the slot with all those fancy mechanics. This from a very deep class of threats at the position which they will revisit soon.

What was that? you dare me to pick all SEC players in the first three rounds? Bet.

When the Saints come back around in the fourth round, I was watching two names. Ben Bredeson from Michigan and Solomon Kindley from Georgia. Thankfully one of them fell to me. In this instance: Kindley. The 6’3” 337 pound behemoth on the interior. Kindley is big yes, but he also moves impressively well for his size while still managing to pack a wallop at the line of scrimmage. He is big, he is mean, and he is a fantastic find for New Orleans at this stage.

The Saints were unable to seal the deal with any of the top guards in free agency as the money was just out of this world. But they still have Easton on the roster, a forever fallback plan in Peat who has so far gone unsigned, and now in this simulation a young bully from Georgia. The Saints address another need, crossing a third off the list before revisiting another.

With Jefferson we got insane route-running ability but not much after the catch. With Duvernay, we get the speed we were hoping for. At 5’10” and 200 pounds, he is a little undersized for what the Saints usually look for in a WR prospect. But I was willing to go out of the box for the Big 12’s leading receiver in 2019, even surpassing CeeDee Lamb in yardage. Duvernay stole the spotlight from Collin Johnson who was supposed to be the big star in Texas (get it?) this season. He reeled in 106 catches and 9 touchdowns on top of that Big 12 leading 1,386 receiving yards in his 13 games.

What excites me most is actually what is criticized about Duvernay. He is usually praised for his RAC ability but dinged for his releases off the line of scrimmage. This is where Van Jefferson’s 24-year-old talents are no longer held against him, but allows him to be a young mentor. In the meanwhile, the former Longhorn gets to work with WR coach Curtis Johnson and the NFL’s best receiver in Michael Thomas. A great place for him to both develop while Duvernay and his 4.39 speed push Tre’Quan Smith for the deep threat role.

Really sticking with the southern states here. Levonta Taylor. I can hear many of you now. “Who?” Snoop Dogg gifs at the ready. But bear with me.

Firstly, the Saints have selected a defensive back every draft since Sean Payton was in New Orleans. Second, they like FSU defensive backs. P.J. Williams and Kamrin Moore each former Seminoles. With this late-round add, the Saints roll the dice on another Florida State defender. This one with some interesting potential.

The Saints are pretty much set across the secondary with Marshon Lattimore, Janoris Jenkins, C.J. Gardner-Johnson, Marcus Williams, and the newly acquired Malcolm Jenkins handling the back end. But they could use some depth as Patrick Robinson is presently the only backup corner on the roster. Taylor provides depth as one of the draft’s most physical man cover corners in the draft. But unfortunately, physicality does not always equal plus coverage ability.

He can use some work for certain, but there are still things to like. One of the elements of rookies the Saints enjoy the most is positional versatility. Thanks to a back injury in 2018, Taylor ended up switching to safety for the 2019 season. He pulled in an interception as well as 37 total tackles and a sack in his final year at Florida State. Before that, at corner, he snatched up three interceptions and returned two for a touchdown. In addition to his safety and outside corner experience, he also did some work in the slot. That kind of versatility is a good skillset to have this late in the draft as it provides multiple paths to potential roles for the team. Get him involved in special teams, and he may capture heart of a coach that is willing to go to bat for him.

That wraps up today’s mock! I will try to get a few of these out as free agency continues to roll along and new positions are addressed. Ideally the Saints can get to a best player available type draft scenario before April 23rd. As they do, we will track and adjust our draft strategy, criteria, and selections. Eventually we will trade up into the second round, too.