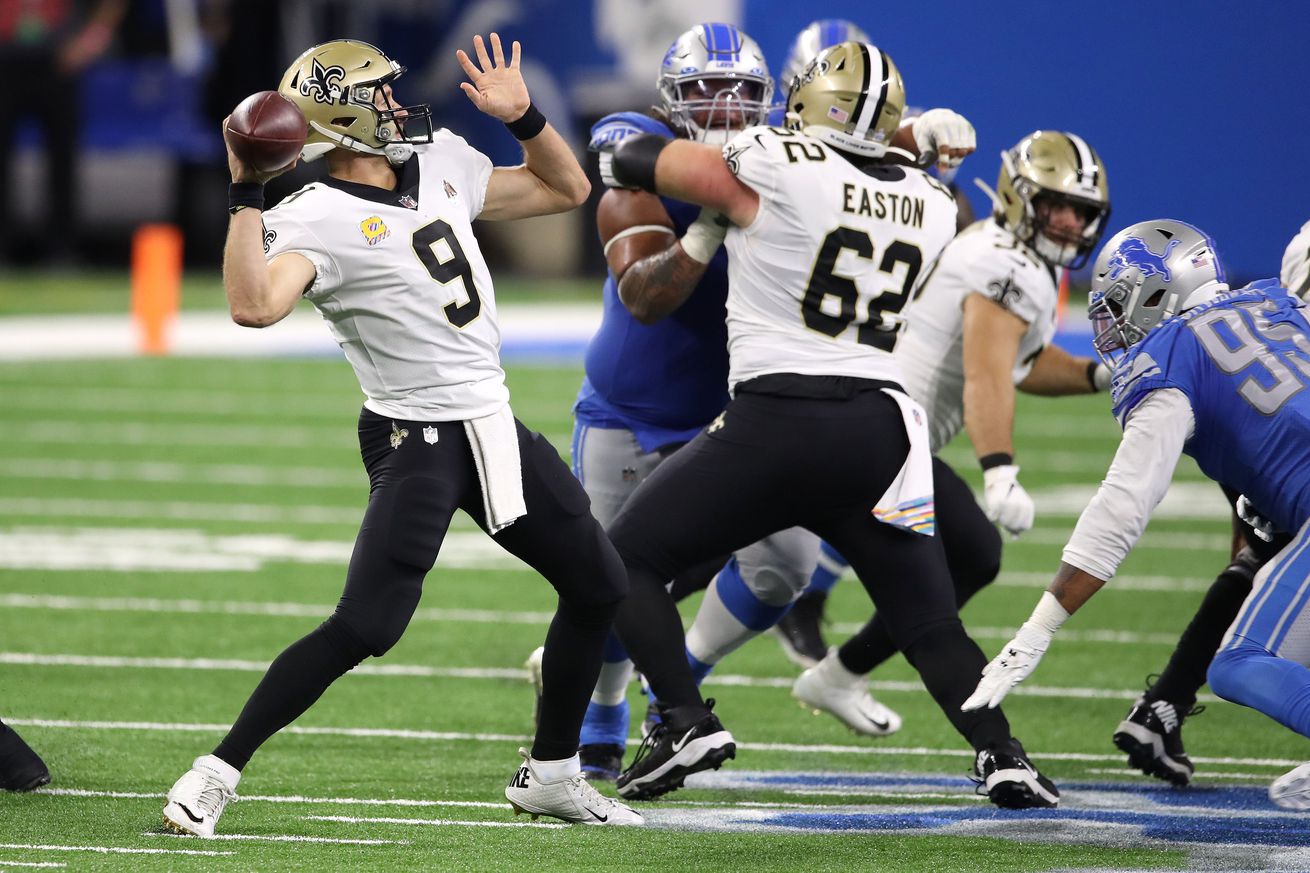 Saints right the ship and get a win in Detroit.

A late night false positive almost kept this game from happening. The Saints try to right the ship after a slow start to the season:

Deonte Harris returns the kick to the 19. First play is deflected and intercepted by Detroit. Detroit will start at the 18. Kenny Golladay bullies Chauncey Gardner-Johnson for a 15 yard TD on 3rd down. DET 14 – NO 0.

Touchback to start the drive. Marquez Callaway gets his first career catch! Saints get their first first down of the day. Drew is trying to get downfield this drive. Emmanuel Sanders made a really nice adjustment and catch for 18 yards. Alvin Kamara is so very good. Latavius Murray gets the Saints first TD of the day on 3rd and goal. DET 14 – NO 7.

.@LataviusM is in for SIX!

Zack Baun tackles Agnew at the 26 on the return. Patrick Robinson gets a great PBU on 2nd and 3. Cameron Jordan gets the sack to force a punt, with some help from Demario Davis.

Saints drive starts at the 20. Brees to Sanders connection looking alive this week. 19 yard catch to get past midfield. Brees gets sacked to force a 3rd and 12, Saints perfect 3rd down conversion rate today in danger. Matt Patricia challenging the call that Brees was down before the ball came out on the snap. Challenge was unsuccessful. Brees escapes the sack and gets the ball to Taysom, but not enough for the first down. Saints offense staying on the field on 4th and short. Brees connects to Kamara on the outside as he beats Oruwariye for 29. Armstead hurt on the play, but walked off on his own power. Taysom fumbles the snap but is recovered by Kamara. Latavius gains 19 on a pass from Brees to get to the 1. Tre’Quan Smith now hurt. Kamara TD run. NO 14 – DET 14.

.@A_kamara6 scores his 7th TD of the season!

Touchback. Lions get past midfield on the first play, after a fantastic catch by Jesse James. Of course, Marcus Williams gets a DPI on a bad pass in the redzone. Ball don’t lie however, Patrick Robinson interception in the endzone!

Brees to Sanders working again, 25 yard pass past midfield! The Pass and Run games have been complimenting each other very well today. Deonte Harris wiggles his way to a first down on a WR screen. Saints moving downfield at will today, especially the ones named Alvin Kamara. TD pass to TQS on a corner route. NO 21 – DET 14.

.@DrewBrees to Tre’Quan Smith for another @Saints TD!

Touchback for Lions. 3 and out, and an unsportsmanlike conduct penalty on Danny Amendola.

Deonte Harris returns the punt past midfield. Looking like a 3 and out, but Saints get a complete pass for a first down and a roughing the passer call to add 15 yards and get into the redzone. 20 yard TD catch for Tre’Quan Smith. NO 28 – DET 14.

Detroit gets the ball with less than a minute left. PBU for Malcolm Jenkins. Another sack for Trey Hendrickson. Malcolm Jenkins with a TFL now. Punt, and end of half.

Touchback on the kickoff. Brees gets to Sanders again for 15 yards. Josh Hill fumbles at the 42, but the ball is recovered by Tre’Quan at the 25. Emmanuel Sanders gets another really good catch and run for a first on 3rd down. Setup in the redzone. Ryan Ramczyk hurt, but walks off on his own. TD for Murray, with a great lead block from Easton. NO 35 – DET 14.

Touchback on the kickoff. Matt Stafford with a fumble, but the Saints fail to recover with plenty of chances. Patrick Robinson hurt, then comes back to PJ Williams getting hurt. Ken Crawley getting some play. DPI on Anzalone in the endzone. TJ Hockenson TD on that one play that’s apparently impossible to defend. NO 35 – DET 21.

Touchback to start. Kamara doing Kamara things. Latavius Murray gets the Saints into the Lion territory, as the 3rd quarter ends. Brees almost looks like he gets picked off, but it bounced. Morstead will come out for the first time of the day.

Punt downed at the 1 by the Saints. Golladay gets them some breathing room with a 14 yard gain. 8 yard scramble by Matt Stafford. Onyemata with a sack to force a punt.

Saints start on the 24. 3 and out for the Saints, who are really missing Ryan Ramczyk. Ramjet is in concussion protocol. Lions start in their territory after a bad punt by Morstead. Lions convert the first down on 4th down, but Kerryon is hurt on the play. Lions will now attempt a 4th and 11, and they convert. Saints get an interception, but it’s called back on an illegal contact by Anzalone that was quote “ticky tack” by Jonathan Vilma. TD by Adrian Peterson, 2 point conversion by Hockenson. NO 35 – DET 29.

Kickoff returned by AK, to the 17. Sean Payton heard your play-call complaints and gave you a 20 yard pass on 3rd and 5. 3rd and 3 at the 2 minute warning. First down for Saints, should be ball game.