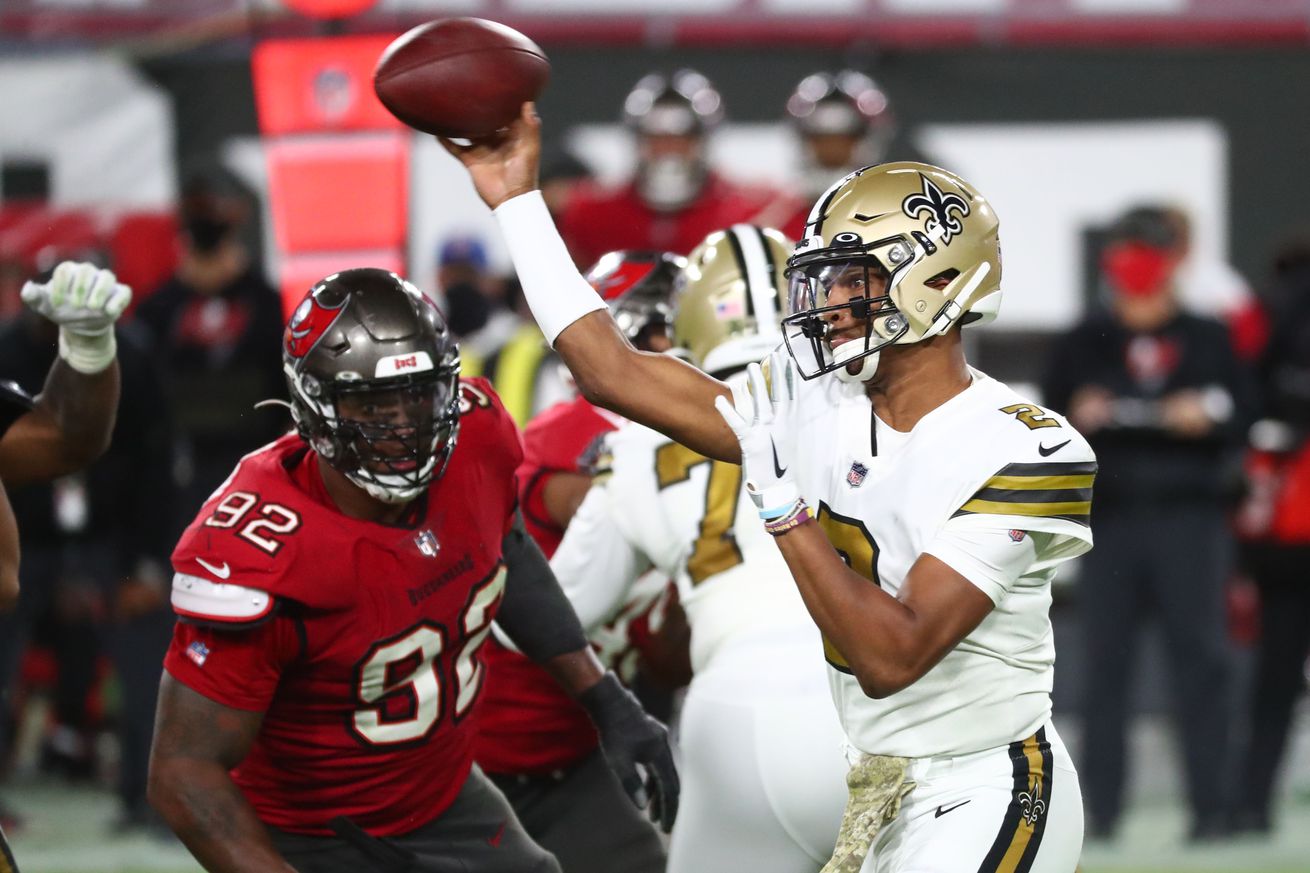 A breakdown of Winston’s work in 2019 and what you can expect to see from him against the Atlanta Falcons.

It’s happened again. For a second straight year, Drew Brees has been injured, and a backup quarterback might have to step in for the New Orleans Saints.

This time, it’s the gun-slinging Jameis Winston, instead of uber-conservative Teddy Bridgewater, who may have to suit up against the Atlanta Falcons in Week 11.

We’ve seen a bit of him this year, but not enough to really take much from. But his five-year career shows us a lot.

The story of Winston’s career has been well-documented. He makes a ton of huge plays, along with a slew of bone-headed turnovers.

But what lies beneath all those turnovers is what’s intriguing. Can he dial it back with the turnovers under the Saints’ regime, while still flashing the high-level throws he generates on a weekly basis?

I took a deep-dive into his 2019 season and career to get a clearer picture.

The first game of Jameis Winston’s career was very foreboding of how things would turn out for him moving forward.

His first ever play in the NFL, in his 2015 rookie campaign, was literally a pick-six. And of course, later on that quarter he would recover his own fumble on a drive, before throwing a strike for a touchdown.

This is the “Flameis” effect. You must take the good with the bad, and they are not mutually exclusive.

There is no quarterback over the last five seasons who’s thrown more interceptions than Winston’s 88. No one is even within 10 of that number. But at the same time, he’s top 10 in touchdowns thrown, with 121.

He has the highest average depth of target of any qualifying quarterback in that time span, at a whopping 11.2 yards, and is tied for seventh in yards per pass attempt, at 7.5.

Winston is an enigma in the sense that any time you bring up a positive about his play, there is just as credible of a negative to counter it with.

For every one of these plays:

There’s one of these:

One of Winston’s main problems is he attempts the high-level quarterbacking things like looking off linebackers and safeties, but he’s just not quite advanced enough at it to do it consistently yet.

You see the ability to look off a defender and come back to his primary route:

Here, he uses eyes to manipulate #58, the underneath curl/hook defender, and make him move out of the throwing window so he can come back to curl route on 3rd and 7 for a first down. Great rep.

But he can’t do it on a throw-for-throw basis, and those gambles come back to bite him at times:

There isn’t quite as good of an end zone view for this play, but he tries to persuade the flat defender towards the top of the screen with his eyes to move out of the throwing window of this comeback route. It does not work, and it should’ve been an easy pick. But it’s dropped.

Hopefully some coaching and introspection (as well as being able to, I don’t know, see clearly) could allow him to develop a bit more in that respect.

In the Saints system, I would expect his turnovers to dwindle down a bit, because of the amount of receivers they have that excel in the short-to-intermediate levels of the passing game, as well as more creative play-calling by coach Sean Payton and the New Orleans offensive coaching staff. But in the same vein, those downfield passes in Tampa Bay are where we saw the best of him.

The absurd lasers through the teeth of the defense.

In other words, you can’t have one without the other.

A good bit of Winston’s interceptions are due to just straight-up inaccuracy. You don’t necessarily fix that five years into a guy’s career.

He is third-to-last among 38 qualifying quarterbacks in adjusted completion percentage over the last five years, according to Pro Football Focus.

Too often, he’s just missing receivers from a clean pocket.

This is just a woefully underthrown ball with hardly any pressure. There are defenders coming around the edge, but he has time to step up in the pocket, and there is a huge hole to fit this ball into. No excuse here, and it should have been picked.

Pro Football Focus has Winston ranked third-to-last in adjusted completion percentage on dropbacks where there was no pressure on the quarterback.

These are somewhat inexcusable. In the NFL, you’re simply expected to put the ball on the money when there isn’t pressure. This is a given. Honestly, the good ones are expected to be accurate, even when there is pressure.

If you were to try to come up with an excuse for this, it would be how often Winston attempts to push the ball downfield, with the aforementioned average depth of target and the fact that he was fourth in deep ball attempts (balls thrown 20 + yards downfield) in 2019.

He also has by far the lowest percentage of yards added after the catch by his receivers of any quarterback in the last five years.

The lack of accuracy over during his career can be somewhat attributed to this, but it still needs to be improved upon, nonetheless.

Where Winston can conceivably improve the most is timing and decision-making. And I have hope for him there.

Playing behind one of the best pass-blocking offensive lines in the league and relying on a good defense, as opposed to constantly playing from behind (even though a lot of the time he was playing from behind because of his own doing, but I digress) should improve his decision-making immediately.

Even if some of it was by his own doing, Winston was constantly playing from behind. Of his 30 picks in 2019, 19 of them came when the Tampa Bay Buccaneers were trailing.

Not all of them are just desperation heaves, but you get the idea. He had a ton of pressure on his shoulders to try and create big plays out of thin air on the majority of his dropbacks.

With all of the weapons the Saints have on both sides of the ball, some of that pressure should be alleviated, given he sees the field.

An area where I think we will see immediate improvement in Winston’s decision-making process with the Saints will be reading the leverage of defenders when attempting to throw out routes. An absurd amount of his turnover-worthy throws came on plays where he just failed to decipher whether or not the primary coverage defender was too close to the receiver to attempt a throw on an out route.

The guy just loves to let it rip on this particular route, for some reason. It’s crazy. I think he has so much confidence in his arm, that he thinks he can laser it in more times than not, even if it’s from the opposite hash. And a lot of the time, he did.

But the reward is simply not worth the risk in this scenario. The best-case scenario is a 10 yard gain, and the worst-case is a pick-six.

The good news is he probably won’t be throwing as many outs in New Orleans, as opposed to Tampa. He’s thrown the second-most out routes in the NFL in the last five years.

The even-better news is that Brees is a master at figuring out the leverage and positioning of defenders on these throws, and can hopefully teach Winston a thing or two about how to decide when to let the ball go.

Last but not least, the area Winston can most-improve in The Big Easy is taking what is given to him in his progressions.

We know Brees’s age-old adage, “You can’t go broke making a profit.” He’s relayed this to Teddy Bridgewater, Taysom Hill and probably many more of his past backups.

It’s a big reason why he’s been as great as he’s been for so long. He doesn’t leave yards on the table. If it’s there, he takes it.

Through Winston’s career, he’s done the opposite. He constantly passes up the first completion available to go for the big play.

Take the play above for example. It’s third-and-long, and Mike Evans is open on a slot curl in the middle of the field, right in front of the sticks.

Winston is waiting on the dig route to come behind it, when he should just take the completion to Evans. And he gets sacked because of it, taking them out of field goal range.

At times, especially when trailing, this thought-process is understandable. But at the same time, he would do this when it was completely unnecessary.

I’m sure this will be one of the first things mentioned in the film room, when he gets acclimated with Brees and Payton. And it’s one of the aspects I’ll be looking for him to work on when/if he does lead the Saints offense.

All in all, I would say this about him: Don’t expect Winston to be a completely different quarterback the next time he steps on the field. He’s been a wild card for five seasons now. That’s a long time.

As much as people always expect linear improvement from players, it rarely happens like that. Most of the time, the best indicator of future performance is past performance, especially with as large a sample size as the one Winston has.

So, if you’re expecting Winston to come in and execute all the big-time throws, while also being as conservative in the turnover department as Bridgewater or Brees, I’d tamper expectations a bit. Some of his issues aren’t exactly fixable by coaching.

However, I am hopeful we can see an improved version of Winston soon. Just how improved he will be is the question.

If there is anyone who can pull something great out of him, it’s Sean Payton, Drew Brees and the Saints.