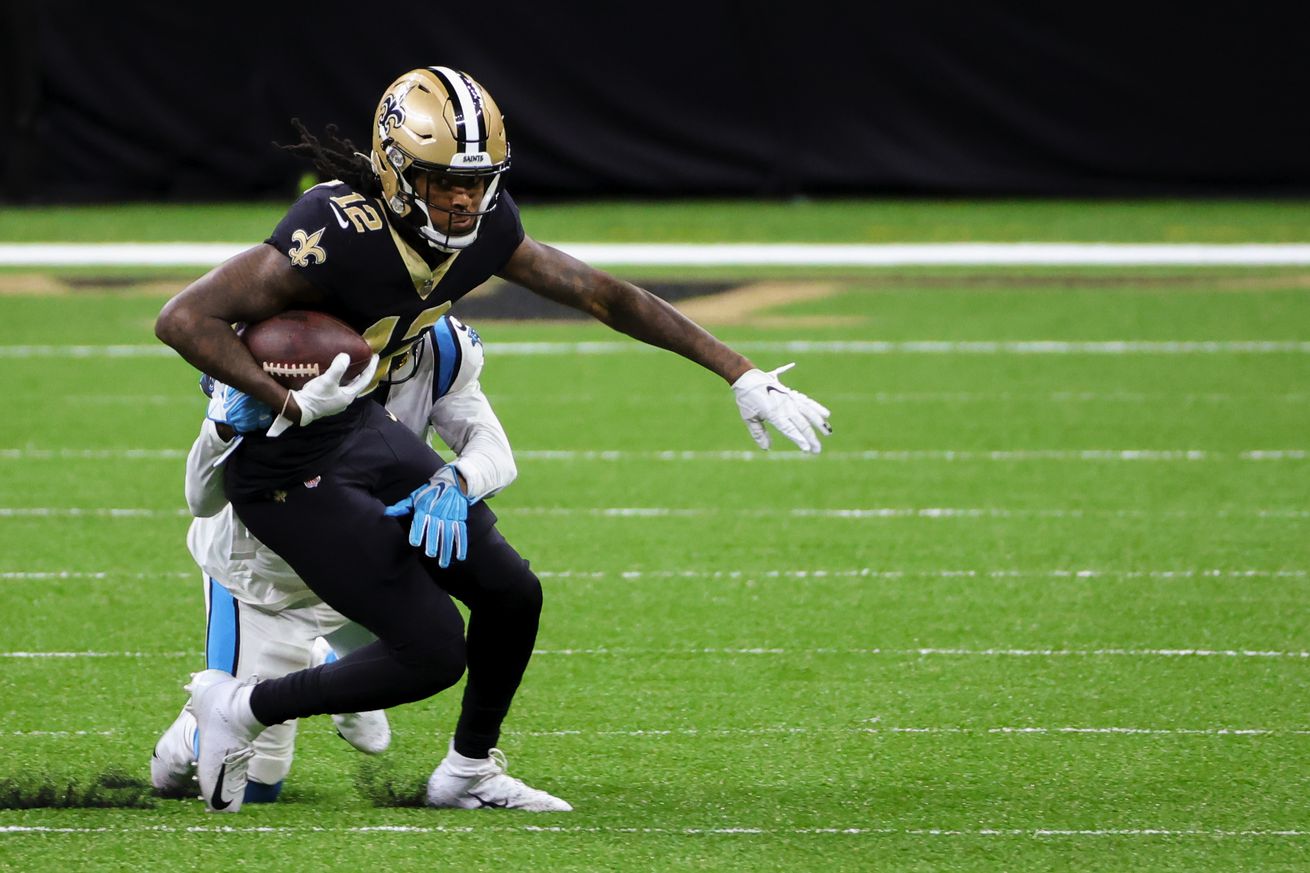 For every positive you can take away from the offense, it seems like there’s a negative from the defense to match it. Which plays were the most indicative of the offense’s success and the defense’s failures?

The New Orleans Saints edged out the division rival Carolina Panthers 27-24 Sunday afternoon in a game that was dominated by offense and seemed to go by pretty quickly.

The Saints completely controlled time of possession and converted 12 of 14 third-downs, preventing Thomas Morstead from punting once. They ran 24 more plays than the Panthers.

However, the Saints defense allowed more yards per play (6.6 compared to the Saints’ 6.2) from Carolina’s O and forced no turnovers.

It seemed, like it has in many games this season, that if the offense wasn’t scoring on almost every possession then then the end result was going to be an L. Brees had by far his best game of the year, with a nearly flawless game, but the secondary was busting coverages and conceding completion after completion.

Not that this is a totally foreign feeling for OG Saints fans, but that’s just not what the outlook of the team was before the season started. Th defense was supposed to be a strength, not something holding the team down.

So, in order to try and figure out the root of the problem defensively and the reasons the offense has been clicking, let’s dig into some of the most important plays from Sunday:

This doesn’t look like that big of a play, I get it. But here me out — it was one of Brees’s best plays of the game.

So, the Saints had been running these scat concepts to Marquez Callaway all game because they knew they’d be facing a ton of zone coverage — which they did.

Basically, all they’re doing is horizontally stretching the curl/flat defender by making him decide between the flat route and the in-breaking slant/spot route. Brees and Callaway really seem to have great chemistry on these plays, where Callaway has to sit at just the right spot in the zone, at the right time, and Brees slings it to him.

They had already run it once up to this point, but with linebacker Shaq Thompson playing the flats, as he over-committed to Alvin Kamara and Brees dumped it behind his head to Callaway.

But here, it’s Tre Boston in the flats, who’s a good coverage player. And he kind of sits on Callaway’s spot route a bit.

Because of this, Brees influences him by pumping out to the flats where Kamara is and comes back to Callaway, who’s now in an open window.

Watch the subtle pump and eye-movement from Brees from the endzone view:

Vintage stuff from the old man.

His work with his eyes and ability to manipulate defenders is a big part of what has made him special for so long, and it’s a big part of why he had such a great game Sunday. Specifically his work in the intermediate levels of the field:

It’s pretty telling that the “Drew Brees’ can’t win b/c of arm strength” truthers go silent when, ya know, the #Saints win

And don’t forget: he did it without his two best wide receivers.

If we continue to see this type of Brees moving forward, along with the eventual return of Michael Thomas and Emmanuel Sanders, look out. That offense will be scary.

Just when it looked like things had gotten back on track and the Saints were rolling, the secondary went back to its BS.

The Saints are in a Cover 2 Zone look, and the Panthers run a great counter to this coverage: Scissors. The scissors concept is simply a corner route by the slot receiver with and intersecting post route to make the safety on one side of the field (Marcus Williams in this case) have to decide between which one he’s going to cover.

At first, everyone was crucifying Marcus Williams for allowing D.J. Moore to run by him on the post. And yes, he is to blame for completely committing to the corner route by Curtis Samuel and not at least respecting the more immediate threat deep.

BUT, let’s not absolve Malcolm Jenkins, who is the other deep safety, and gets caught flat-footed and too low for no reason. This prevents him from meshing onto the post, which actually runs into his zone eventually.

This is probably just a lack of communication between these two guys, as Williams probably expecting Jenkins to have his back with the in-breaking route, and Jenkins didn’t think that was his responsibility.

It’s impossible to really know right now who’s more at fault, but it’s just bad overall. And they’ve got to get it fixed.

Plays like these, along with a mediocre pass rush, are why the Saints are allowing the second-highest Estimated Points Added (EPA) per pass play in the league right now, via PFF — second only to the Jaguars. In other words, the Falcons pass defense has been better than the Saints so far this season.

Let that sink in.

That’s what the Saints were envisioning when they re-signed Andrus Peat this offseason: the mobility and the power.

The Saints are running a simple screen out to Kamara with Peat as the lead blocker on 3rd and short, and Peat gets out in front and bulldozes Jeremy Chinn to help create a path for the first down by AK.

This wasn’t the only good play Peat had all game. He had a solid game overall, only allowing one QB pressure, to go along with a PFF run blocking grade of 71.6.

He actually had multiple pancake blocks on screen passes in this game, and was moving guys off their spots on run plays all game.

This is good to see, and it’s honestly been a trend this season. He’s much-improved.

Now, part of the reason he’s “much-improved” is because he was so awful the past two years, but nonetheless, he’s been better.

And he’s mainly been better on screens and runs, with a solid 67.2 run block grade on the year.

I was harder on the Saints for re-signing Peat than anyone, due to his lack of reliability and poor play over the past two years, but I’ll give credit where it’s due for now.

This doesn’t necessarily make it a good signing yet, but he’s showing positive regression to the mean.

4. Ceedy or CJ? Whatever he goes by, he needs to play better next week

I honestly can live with all the plays where he gets beat by a slant out of the slot, out-run by a speedy receiver on a crosser or misses a tackle on Sunday. But this play by C.J. Gardner-Johnson. This play irked me.

This is just total lack of discipline from CJGJ.

The Saints are in max Cover 2 Zone, and the Panthers run a Mesh concept, with crossers underneath. And the Saints are in perfect position! They pick up the crossers and Teddy Bridgewater had nowhere to go with the ball… until C.J. does something dumb.

He’s got a crosser in front of his face and the first down marker, and for whatever reason, he bites towards the middle of the field on a desperate pump fake by Bridgewater and leaves Samuel streaking open toward the sideline for a first down.

You can see him bite on the pump from the end zone view, to the right of the screen.

There was absolutely no reason for him to feel the need to help the middle underneath zone players. Not only did they have things covered, but he was too far away to even do anything in the first place.

This screw-up resulted in a third-down conversion on a drive that ended in a score for Carolina.

This was one of the 10 catches he allowed on 11 targets for 98 yards and 59 yards after the catch on Sunday. He ended up with an overall game PFF grade of 28.7.

He’s been good all year, and it’s just one game. But an outing like that just can’t happen again when he’s supposed to be one of the bright spots on defense.

This play is so frustrating. At such a big point in the game, Sean Payton decides to put Taysom Hill in at QB. And he just doesn’t get the job done.

The play call is great. It’s a play-action rollout, with a wheel route by the motioning Tre’Quan Smith and and a flat route underneath by Josh Hill, to Hi-Lo the flat defender in a Cover 6 Zone look.

As you can see, Shaq Thompson — who had been getting picked on all game — is too shallow. And the post by Callaway has cleared the deep defenders just enough. There is room to fit this in to TQS on the wheel route.

Instead, Hill doesn’t see it and dumps it off to Josh Hill for no gain.

This is why people are growing weary of the Taysom stuff. He hasn’t been effective in really any aspect of the game when he’s been in this season — including running the ball (3.7 yards per carry). And when he drops back to pass, he’s missing simple reads, like this one.

With the way Brees has been heating up, I would stray away from subbing him out for Taysom unless it’s a favorable run/short yardage situation. He’s just not been very good, and more importantly, defenses seem to just have him, and the personnel packages he’s called in on, figured out.

There is a place for him in this offense. It’s a small one, but there’s a role where he can make a few big plays this year. I just don’t think it’s with him lining up at QB when Brees is trying to get in a rhythm.