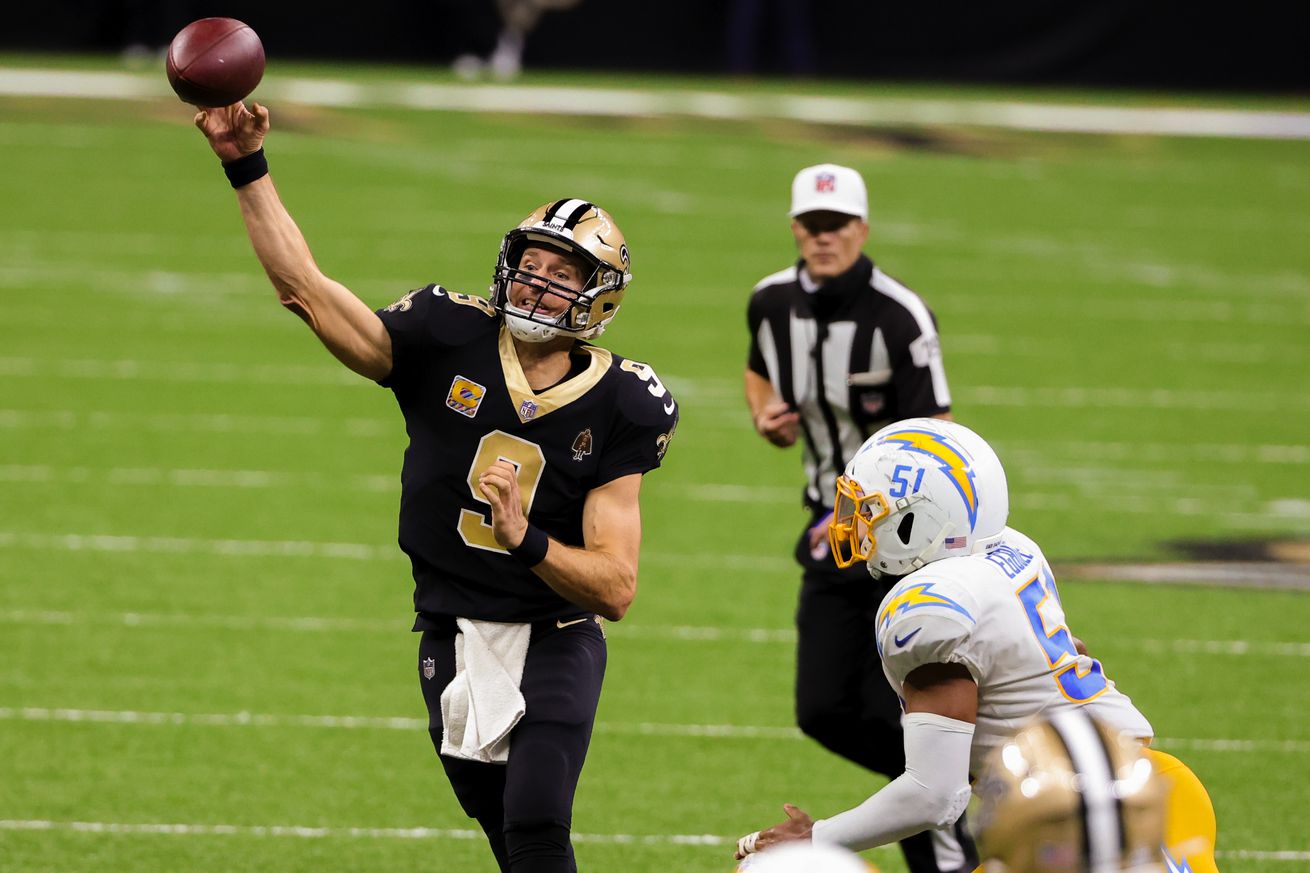 This team just can’t win a normal game, can they? In what was a dynamic overtime thriller of a Monday Night Football game, there were a few plays that stuck out to me that highlight overarching themes with this Saints team.

14-0 deficit in the first quarter, 20-3 deficit in the second. This New Orleans Saints team not only seems to respond well to adversity, but at this point, they might even require it to get rolling.

After being utterly dominated for most of the first half in their matchup with the Los Angeles Chargers, the Saints would go on to outscore them 27-7 from the end of the second quarter on.

They were able to do this behind an effective pass rush and a few big time drives by the offense when they needed them most.

The offense getting in rhythm had a lot to do with Brees continuing his improvement as the season goes along, making better decisions, moving more confidently in the pocket and throwing the ball more accurately. Besides his one pick, which was a poor decision to force the ball into coverage, Brees was very good in this game.

Defensively, Cam Jordan led the charge, even though the half a sack doesn’t tell the entire story. Jordan led the team with a season-high eight QB pressures and seven hurries, to go along with six run stops. He was elite, even though it was against a poor offensive line.

So, the first play I want to highlight is a pressure from Jordan that might not have gotten the most recognition, but was indicative of the impact he was having all game.

1. Cam is a behemoth

In a roundabout way, Jordan prevents a touchdown on this play. He takes on a double team and gets enough of a push to force Justin Herbert to step up in the pocket.

This step-up allows Demario Davis to get a hit on Herbert as he throws.

Little do they know, Marshon Lattimore is beaten deep on a double move (at the top of the screen).

These types of plays are what makes Cam as consistent as a heat pump and the most reliable Saints defender. Because even when he’s not racking up stats and when he’s getting double-teamed, he’s making his presence felt and providing value.

My jaw kind of dropped when I saw this throw from Brees on the all-22. Not that it’s that crazy of a throw, but just considering the narrative about his lack of arm strength and all, it was an impressive pass from the 41-year-old.

The Chargers defense is in their typical Cover 3 shell, and the Saints are going to run a simple deep out concept.

The Chargers know Brees likes to dump the ball off short, and this flat defender is eyeing Jared Cook on the short flat route.

Brees has time to step up, and he recognizes the flat defender is a smidge low and flat-footed.

Sanders runs a great route, getting the corner to commit to the inside from outside leverage, and he attacks that outside leverage. This creates enough separation and a window for Brees to fit it in.

This isn’t necessarily a rope from Brees, but it’s about 23 air yards to the sideline from the opposite hash, as he’s getting drilled. And it’s on target.

These are the throws defenses are counting on Brees not to make. But surprisingly, he’s been pretty effective when throwing past 10 yards.

In Week 5 vs. the Chargers, he was 6/10 for 85 yards and the 1 INT. Now, was the pick he threw in this area bad? Yes. But it had nothing to do with his arm strength. Just a poor decision.

The arm isn’t great by any means, but like in previous seasons, it’s not really the problem. And the real problems, which include trust between receivers and pocket movement, seem to be improving each week.

3. Secondary has to fix some leaks

Nick Underhill highlighted this play on Twitter, as Patrick Robinson had been catching some flack for what people thought was a big play given up by him, due to the TV Broadcast footage not showing all 22 players.

This is the Mike Williams’ play. Looks like supposed to be Cover 2, but the safety attacks down. pic.twitter.com/UQ51RR8wOR

Once the all-22 came out, it was clear what happened.

Mike Williams is running a simple fade to the top of the screen, and for some reason P.J. gets no depth, pays him no mind and bites down on a slot curl route that is already well-covered.

I don’t know if Williams just didn’t even see the receiver motion over or if he just assumed he was running a short route, but it’s like he didn’t know he was over there.

Nonetheless, these things just simply cannot happen, especially at a time in the game like this. These types of mental errors, which seem to be happening far too frequently with this defense and secondary right now, are resulting in free yards.

It’s already hard enough to stop offenses nowadays without busting coverages. But the busted coverages are in large part the reason this defense is 29th in the league in Estimated Points Added (EPA) allowed per pass play — Only the Jets, Falcons and Jaguars are worse.

It’s really hard to win games that way, and it almost makes you wonder how this team’s record is even as good as it is right now.

4. The predictable runs on early downs

Now, these are the plays that drive me insane when I’m watching the Saints. The plays with Latavius Murray in the backfield, multiple tight ends and a receiver or two out wide who you just know are out there to block.

These are the plays that I was begging Sean Payton to substitute for play action passes Monday night in my pass offense preview — which he ran 10 with Brees under center, a decent amount.

They make things so much easier for the defense to see what’s coming, as they don’t have to account for any real pass threat due to the personnel giving it away.

I mean look at this. Who are you fooling, Sean?

And I’m not saying to never run these plays, because we all know Coach Payton likes to give multiple looks to the defense, but they just need to be run less and in better situations.

And that means not on second-and-long. It’s just a wasted down most of the time.

Murray is a solid back. But he’s not special enough to be giving too many carries on downs like this. He’s averaging 4.2 yards per carry, which is the 29th-highest mark in the league.

And he has avoided a total of THREE tackles on running plays this year, 45th fewest in the league among 55 qualifying RBs. You’d be much better off finding a way to get Kamara the ball or simply passing than waste too many early downs with Murray runs.

The Saints are near the middle of the pack in pass rate on second-and-long this season, when it’s 2nd and 8+, the win probability is between 20 and 80 percent and excluding final two minutes of halves.

They’re typically at the top of the league in pass rate in second-and-longs. Is that because of Brees’s struggles in the first few weeks? Michael Thomas’s absence?

I don’t know, but either way, it needs to be changed for this offense to be more effective and unpredictable. Even with MT out and Brees theoretically on the decline, passing the ball on early downs more often objectively gains more yards for the offense on a consistent basis.

5. Sanders and Brees look to be completely comfortable

The Brees-to-Sanders connection was in full force Monday night, with Emmanuel Sanders catching 12 of 13 targets for 122 yards — the one incompletion being tipped at the line of scrimmage when Sanders was wide open.

This route is an example of Sanders’s route-running savviness and Brees’s trust in that savviness. Early on, Brees wasn’t comfortable with betting on Sanders beating defenders and getting open. Now he is.

Watch what Sanders does on this route.

The Chargers are in a 3-deep, 3-underneath zone look, and the deep third defender to Sanders’s side has outside leverage while he’s trying to run an out route from the slot.

He works the top of this route so well, coming to a halt without turning his shoulders yet, as if he’s going to try to sit in the zone instead of break outward.

This causes the DB to move and get his momentum rolling inside. Just as he does so, Sanders cuts out and has enough separation for Brees to hit him for a third down conversion.

It’s so important for him to be capable of beating one-on-one coverage now that MT is to be returning, because he’ll be getting those looks all the time.

And as he and Brees continue to grow accustomed to each other, feeling out zone coverages and finding windows for throws will occur more frequently.

All the hype about Emmanuel Sanders was real, he’s legit. It just took a minute for he and the ol’ gunslinger to warm up to each other.