It sounds like Marcus Davenport hasn’t had the easiest offseason from a health perspective. As Katherine Terrell of The Athletic writes, the Saints defensive end had a pair of surgeries on his knee and three surgeries on his left hand. 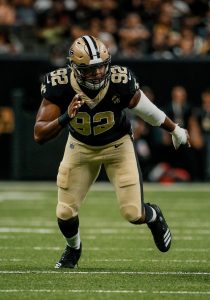 Davenport had a stint on IR last season while dealing with a shoulder ailment, so his two surgeries were likely intended to fix that injury. Meanwhile, Davenport said he’s been dealing with a pinkie injury that dates back to college, but the injury has progressively gotten worse and culminated in Davenport having part of the finger amputated.

The latest finger surgery has put Davenport’s shoulder rehab on hold, but the veteran admitted that he’s feeling better and is excited to get back on the field. Saints coach Dennis Allen previously hinted that training camp was a reasonable return date for the defensive end.

The 2018 first-round pick has spent his entire career with New Orleans, missing 17 games in four seasons. While he was limited to only 11 games (nine starts) last season, he still finished with career-highs in tackles (39), sacks (nine), and forced fumbles (three). In total, Davenport has 21 sacks in 48 games.

The 25-year-old helped the Saints open up some cap space this offseason by reworking his deal. More than $8MM of Davenport’s 2022 $9.6MM base salary was turned into a signing bonus, helping the team carve out $6MM. Davenport is set to hit free agent following the 2022 campaign.