Malcolm Jenkins was one of a handful of New Orelans Saints starters to stay on the field for all 70 defensive snaps against the Tampa Bay Buccaneers, and he turned in some impressive tape in his first game back in black and gold after six years with the Philadelphia Eagles. While he may be listed as a strong safety, he really plays a brand of positionless football more like what you’d expect to see from Tyrann Mathieu, Jamal Adams, or another one of the young stars making a name for themselves.

Malcolm Jenkins’ triumphant return to New Orleans couldn’t have got off to a better start. Jenkins was used all over the Saints’ defense and had an impact in seemingly every role. He spent snaps as a deep-lying free safety (22) in the box (20), crowding the line of scrimmage as a threat to blitz (17), covering the slot (7) and even split wide as a perimeter corner to match up with Bucs’ receivers (4). He even played special teams to add to his contributions. Jenkins had two total pressures from six pass-rushing snaps on the blitz, recorded two defensive stops and didn’t give up a catch during the game as the Saints defense frustrated Tom Brady and the Bucs.

And here’s a simple pie chart reflecting all the different alignments Jenkins saw against Tampa Bay: 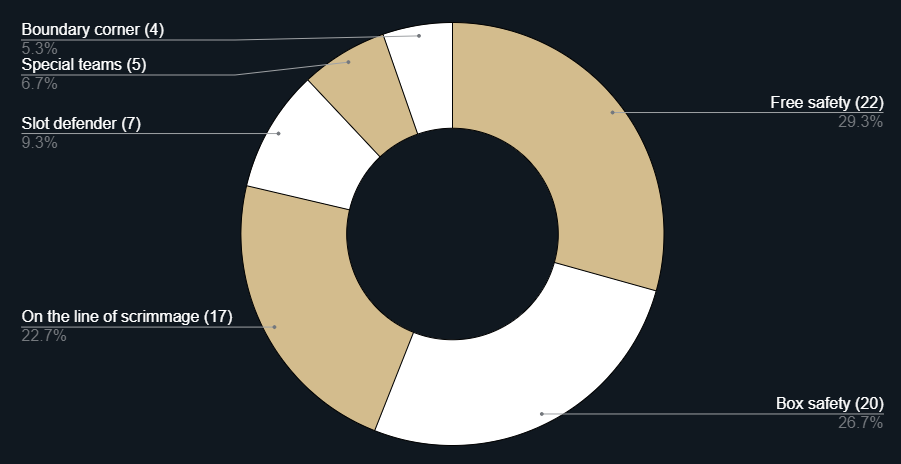 That versatility explains why the Saints were so eager to bring Jenkins back into the fold after letting him walk away back in 2013. He developed into a great player with a well-rounded skills set in Philadelphia, and his ability to wear so many hats was on full display. Being able to ask him to switch spots from one play to the next relieves a lot of pressure from other players, and we should expect to see more of this as the season continues.