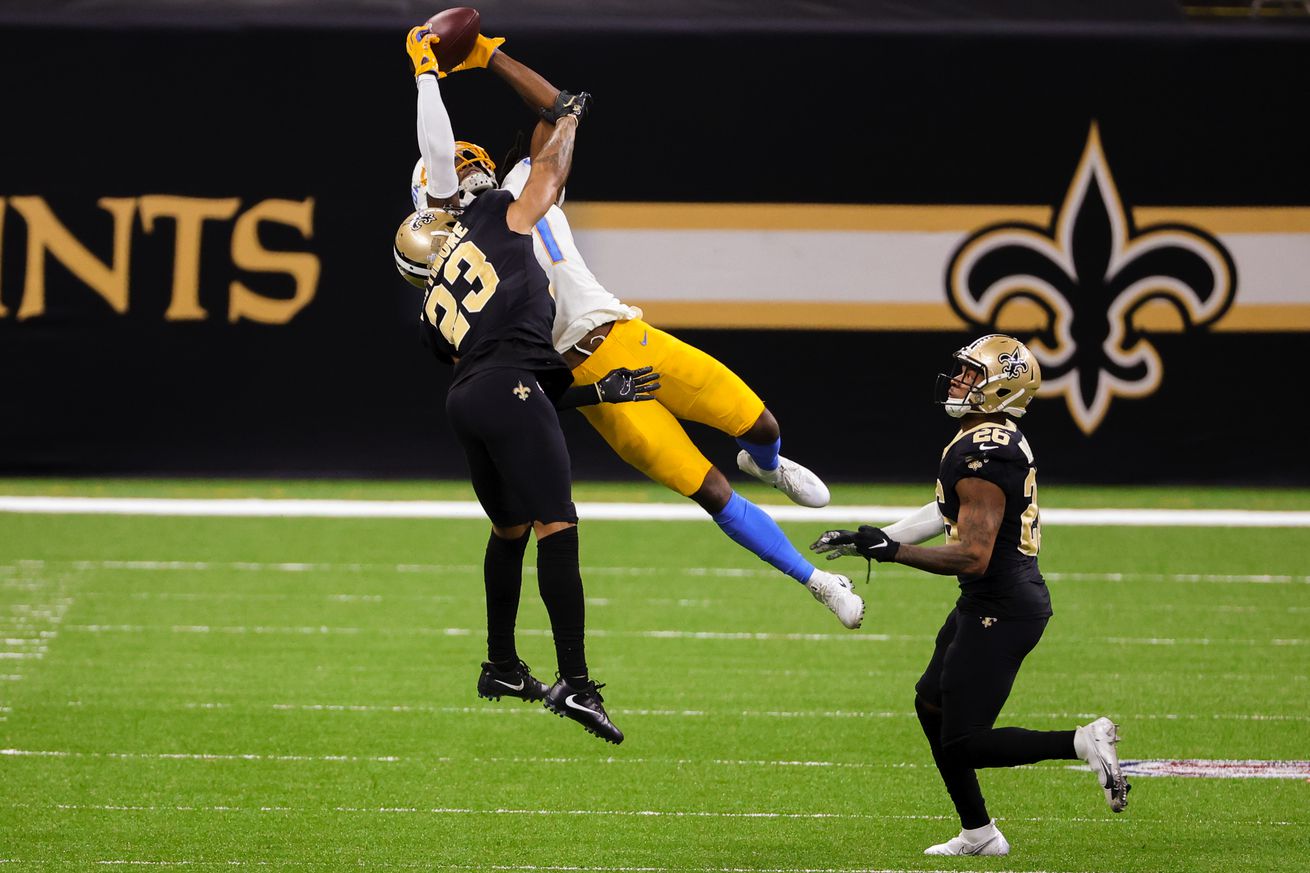 The New Orleans Saints defeated the Los Angeles Chargers 30-27 in overtime on Monday Night Football. Here are our overreactions.

The New Orleans Saints won 30-27 in overtime against the Los Angeles Chargers in primetime on Monday Night Football. Of course, it wasn’t without a few heart attack-inducing moments, as well as a couple of lucky ‘doinks’ to make this one happen. There are plenty of overreactions we can gleam from this game. So, let’s get to it.

First and foremost, I am not saying New Orleans won’t make the playoffs. They currently sit atop the NFC South with a 3-2 record. However, if the Saints were to miss the playoffs we can likely blame it on the poor secondary play and all the evidence was on display on Monday night.

The secondary allowed Chargers rookie quarterback Justin Herbert to throw for 264 yards and 4 touchdowns on just 20 completions leading to a 122.7 rating. Furthermore, Herbert was without much of his starting offensive line as well as his top target in wide receiver Keenan Allen for much of the game.

Saints Marshon Lattimore, Patrick Robinson, and Marcus Williams took turns misreading plays, busting coverages and allowing big play opportunities that should have led to a Chargers victory. Had Los Angeles not missed an early PAT or a final-second 50-yard field goal attempt the Saints would be 2-3.

With the bye week coming up for New Orleans in Week 6, the secondary will have time to figure things out as they are currently the weakest link on the team. If their performance does not improve, they very well may be the reason the Saints miss the playoffs.

Yes, Taysom Hill scored a game-tying touchdown late in the fourth quarter on Monday night. However, head coach Sean Payton routinely brought in Hill on third-and-short situations in which the quarterback could either not convert with his legs or his arm. Hill’s RPO plays are no longer fooling opposing defenses, and now his snaps are representing no more than a lost down.

it’s almost as if defenses know what to expect when Taysom Hill is in the game pic.twitter.com/KCsb9sbW9T

Perhaps the most mind boggling of decisions was during the Saints overtime drive in which quarterback Drew Brees was 5/5 for passing attempts while effectively moving the ball downfield. A touchdown would have ended the game for New Orleans. On a third-and-short Payton pulled Brees and put Hill into the game. The ensuing play was read well by the Chargers forcing a fourth down, a subsequent timeout and then a field goal for the Saints.

Luckily, it would be enough for New Orleans as the defense took the field and locked down the Los Angeles offense. Hill was a nice wrinkle to the offense, now he is taking the ball out of the hands of the best playmaker on the team in some of the highest leverage situations.

New Orleans Will Not Win the NFC South

Heading into the 2020 season the Saints seemed to be a juggernaut that not even a Tom Brady-led team could unseat at the top of the division. While that remains to be true, it likely won’t hold over the course of the season as things stand. New Orleans has overcome two large deficits to win games in the last two weeks. Prior to that, they lost to the Green Bay Packers and Las Vegas Raiders. What did all of these have in common? The defense put them in a hole and the offense struggled to recover.

Luckily, the defensive line has appeared to have adjusted and figured out its issues. The secondary? See above. Additionally, stale playcalling on the offensive side of the ball have led to a lot of three-and-outs, as well as stalled drives. Additionally, this offense is built around efficiency and ball control, not big play abilities. When the efficiency and control disappear, not much is left.

If it weren’t for a few timely plays and a little bit of luck, this team’s season would look completely different. All the issues were present on Monday night. Unless this team gets right over the bye week, they will have a tough time facing a hot Carolina Panthers team and a rematch against Tom Brady. New Orleans will likely drop some of those games, and consequently the division, unless changes are made and quickly.