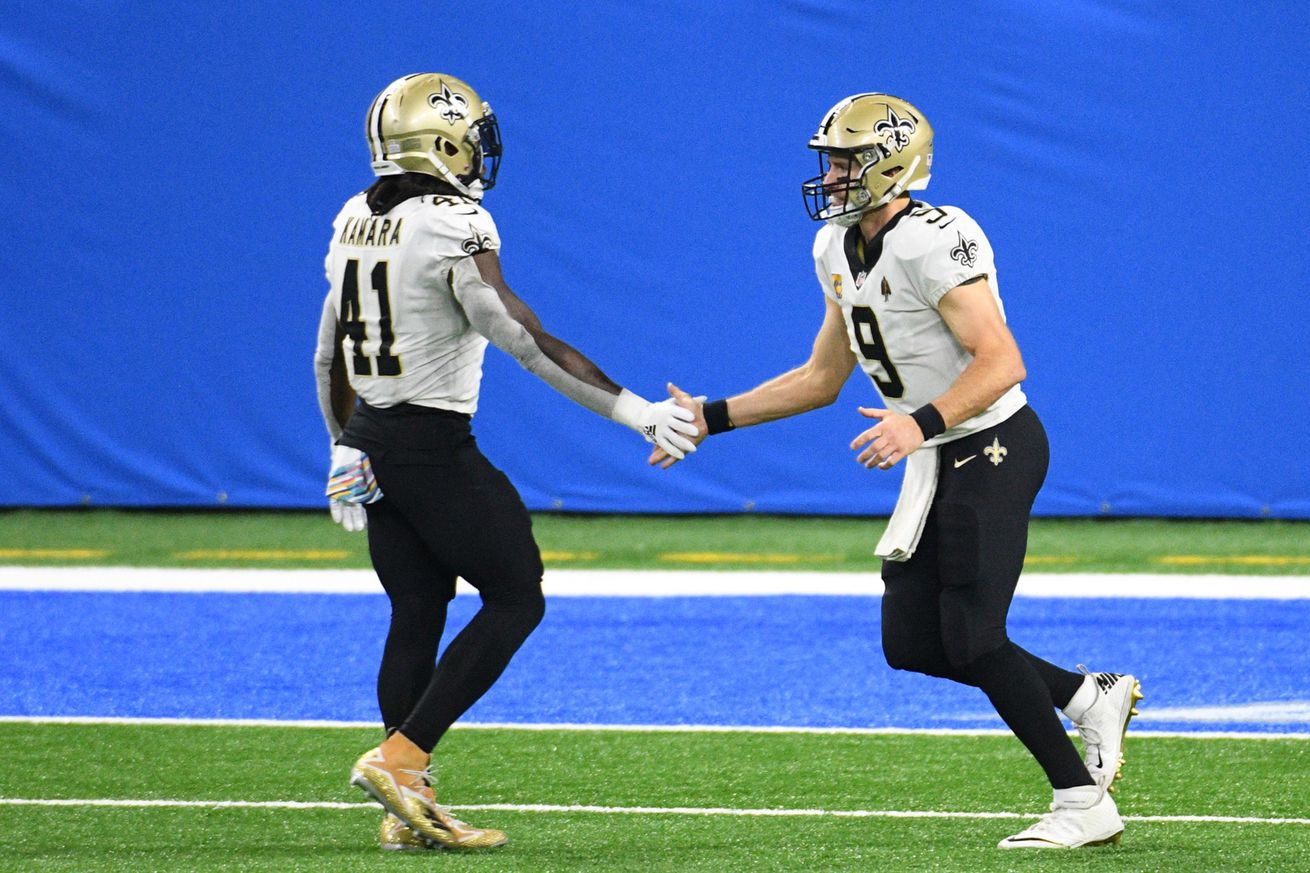 It’s that time of the week again, here are our overreactions from the New Orleans Saints Week 4 matchup against the Detroit Lions

It’s that time of the week again, but the big difference between last week and this week is that the New Orleans Saints walked away with a victory over the Detroit Lions. Last week’s overreactions centered around whether or not quarterback Drew Brees was still “the guy” and head coach Sean Payton’s inability to adapt his playcalling. Well, this week we are on the other end of the spectrum.

The team that showed up in Detroit on Sunday is the team everyone thought they would be heading into the season. Despite a slow start to the game, Brees and company were able to come back and win the game 35-29. Here are our overreactions from the result:

It took three weeks, but we got there on the fourth. Brees finally was the catalyst for the offense and made the plays we haven’t yet seen him make with any consistency in 2020. His statline was fine at first glance, 246 passing yards with 2 touchdowns and 1 interception (tipped at the line). But it was the small things he did so well to help march the team to victory.

Drew Brees led the offense’s grading with a superb 89.4 Overall mark in Week 4!

Brees looked comfortable throwing the ball downfield and the plan was clearly to get him to go deeper down the field. If the 41-year-old can replicate these types of performances week to week then he is the undisputed QB1. His football IQ and ability to lead the team is far more valuable than what Jameis Winston can offer to the team right now. In fact, if Drew continues to prove that Father Time is a non-factor then he may just be able to play until his age 45 season.

Overreaction of 2019: Hill is the quarterback of the future and he should earn $21 million. That wasn’t CSC’s overreaction that was the New Orleans Saints. This guy was the “heir apparent” to Drew Brees. Now, don’t get me wrong, I was and still am a massive fan of Hill’s previous body of work and his work ethic. He carved out a niche in the offense we haven’t seen before and was a phenomenal secret weapon. But, that is the thing, he is no longer a “secret” as teams have figured out what to do when he takes the field.

Hill has trouble reading defenses, he is more comfortable running the ball even in situations it’s clear he needs to throw and the league is figuring it out. He has now had multiple blunders this season and we are only through Week 4. He either needs to add an additional wrinkle to the offense or at this point he will only represent a wasted down.

Every year for the last three years was supposed to be Smith’s “breakout” season. It has never materialized. The receiver has a few games every year that really highlights his abilities and why he continues to have a place on the team. With Michael Thomas out with a high ankle injury, Smith has had the ability to step up and become one of Brees’s top options.

2️⃣ for Drew, 2️⃣ for Tre’Quan

Smith caught all four targets for 54 yards and 2 touchdowns on Sunday. While he didn’t boast an eye popping number of yards, he played well and was always in position to catch some of Brees’s deepest passes of the afternoon while also finding the end zone twice.

Little is known of how long Thomas will be held out, he very well could be back next week. However, Smith has quickly gained some trust from Brees and he could make his case for a Pro Bowl nod if he can maintain his scoring numbers.

The Saints Did Not Miss Cornerback Marshon Lattimore

Both Lattimore and Janoris Jenkins were absent from Sunday’s game. That left Patrick Robinson and P.J. Williams to assume the role of CB1 and CB2. I won’t lie, that seemed to be the worst case scenario against an offense led by Matthew Stafford. Instead, the secondary had one of their best games of the season by holding Stafford to just 206 passing yards. Robinson was even able to add an interception to his resume.

Additionally, New Orleans had their fewest penalty yards all season. That really shouldn’t come as a surprise as Lattimore was responsible for 57 yards of the Saints total 398 penalty yards on the season. Much of those 398 yards are from defensive pass interference.

New Orleans cleaned up their act for the most part on the defensive side of the ball as far as penalties are concerned, and much of that can be attributed to clean play by the corners. Lattimore will likely seek a max deal this coming offseason, but he was easily replaced by journeymen. In fact, the journeymen played lock down and clean defense compared to what Lattimore has shown this season.