Defensive tackle David Onyemata announced that he has tested positive for a banned substance (Twitter link via Kat Terrell of The Athletic). As a result, he’s facing a suspension from the league office, though it’s not clear how long the suspension will be. Meanwhile, Onyemata says he didn’t knowingly violate the rules. 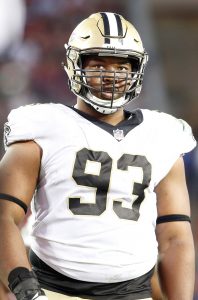 “I was informed by the NFLPA yesterday that I have tested positive for a banned substance resulting in a suspension for part of the 2021 NFL season,” Onyemata wrote on Instagram. “While I was certainly surprised and disappointed with this news, I am responsible for what I put in my body. As I have never knowingly taken anything that could cause a positive test, we are currently in the process of testing the supplements I was taking at the time of the test. Regardless, I am committed to being more aware of any medication and dietary supplements that may contain substances banned by the NFL.”

Onyemata cracked the Saints’ starting lineup in 2019 and re-upped with the Saints last year on a three-year, $27MM deal. The move garnered mixed reviews since Onyemata wasn’t a tremendous performer in his platform year, per the advanced metrics. Then, he silenced the critics with 44 tackles, 6.5 sacks, 16 quarterback hits, and one interception in 2020. Pro Football Focus graded him as the seventh-best interior defender in the NFL, behind only Aaron Donald, Chris Jones, Mario Edwards Jr., Vita Vea, DeForest Buckner, and Cameron Heyward.

It sounds like the Saints will be without Onyemata for their season opener, a bad blow given that they may also be without cornerback Marshon Lattimore. Lattimore seems likely to receive a suspension for his March arrest and subsequent charge for handgun possession.

Onyemata has started in 40 of his 78 games for the Saints, notching 16 career sacks, 21 tackles for loss, and 42 quarterback hits in total.