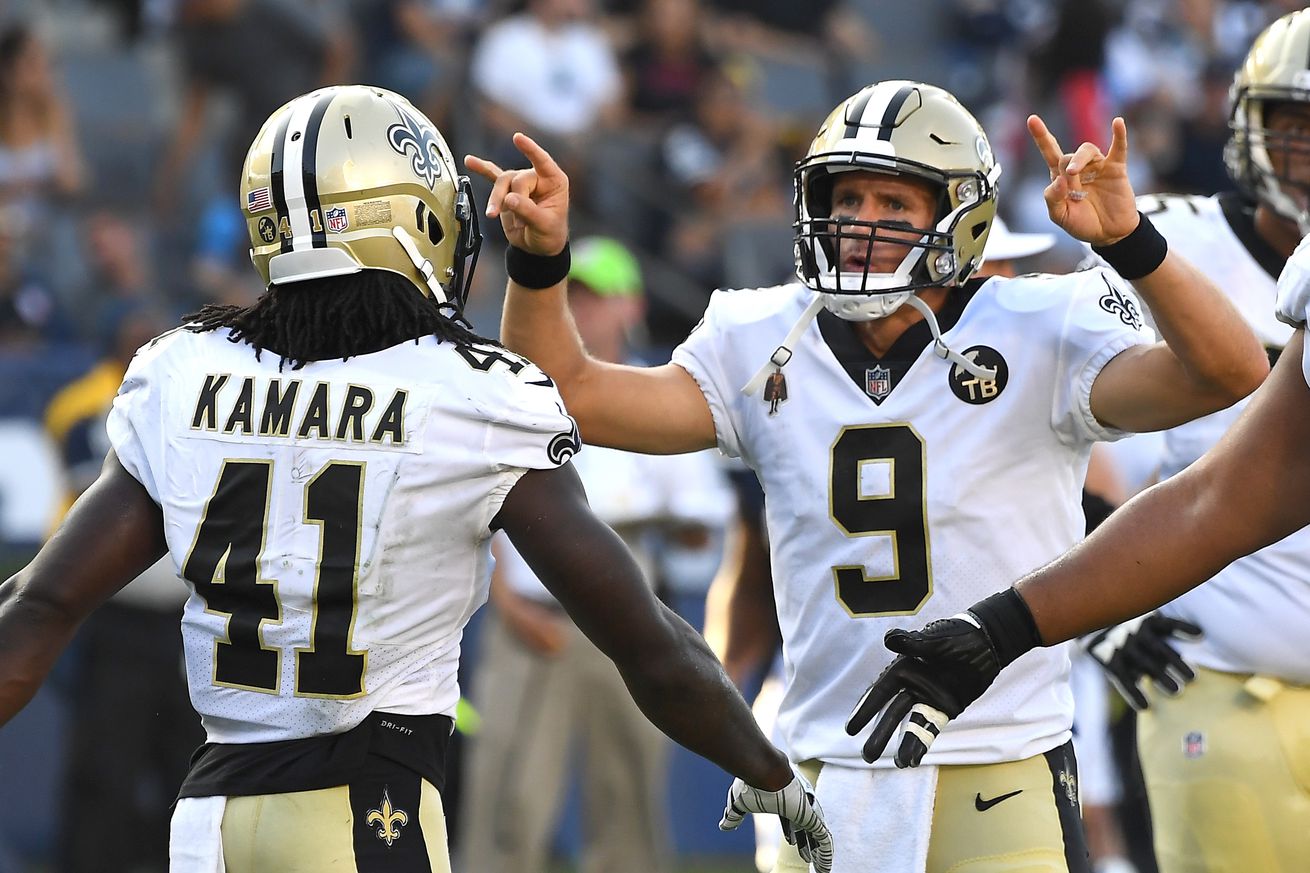 The first quarter of the 2020 NFL season has concluded and now we move forward with Week 5. What will this week have in store? Let’s take a look!

The New Orleans Saints host the Los Angeles Chargers on Monday Night Football back home in the Superdome. The Saints in primetime, especially at home, has normally been synonymous with victory, but recent experiences has proven nothing will come easy for the Saints, even where they used to be at their best. Nothing can be taken for granted. Wins certainly won’t come easy, and the Chargers will be fighting to save their season.

These Saints answered the call when dirt was being thrown on their coffin, down 14-0 early in the first quarter in Detroit last week. This team played inspired football, despite all that was working against them, and now that inspiration continues this week against the Bolts. No player will be more inspired than Drew Brees, who looks to remain undefeated against his former franchise. Let’s hope that streak remains intact. Let’s take a look at this and every matchup in Week 5.

I told you so: Saints over Lions!

What do I know: Falcons over Packers?

Tom Brady may be missing the overwhelming majority of his pass-catchers in this one, but the Bucs defense will take care of business against Chicago. Tampa wins 23-21.

Washington will be overwhelmed and outmatched in this one. Los Angeles wins 30-17.

Tennessee’s defense will play this one tough and keep it close, but the Buffalo passing game will make the big plays necessary in the end to pull out the win. Buffalo wins 16-10.

The top-ranked Pittsburgh defense will give Philly problems all afternoon long. Pittsburgh wins 24-10.

Arizona is on a two game slide, but they’ve just found the cure for their ills, the Jets. Arizona wins 28-9.

Houston is in absolute freefall, and maybe jettisoning their anchor of a head coach/GM will help, but it will take more than this week. Jacksonville wins 20-7.

No doubt Joe Burrow picks up his second win sooner than later, but not this week. Baltimore wins 35-14.

Without their superstar franchise player, Carolina is on a roll, and that roll continues against sadness incarnate in Atlanta. Carolina wins 34-23.

San Francisco’s third-ranked defense is all that’s keeping its hollowed-out husk of an offense upright. They’ll get just enough to cling to victory against Miami. San Francisco wins 21-20.

Dallas may be hilariously bad, but the Giants are depressingly bad. The Cowboys offense finally finds a team that can’t outscore them in the clutch. Dallas wins 39-19.

This matchup is sneaky good and it will feature strength on strength as the top-ranked Cleveland rushing attack faces Indy’s 2nd-ranked defense. Ultimately, this game will come down to Baker Mayfield and the Cleveland passing game making the big plays to earn the Browns a huge conference win. Cleveland wins 26-23.

Cam Newton returns to the Pats with a huge game through the air against Denver. New England wins 28-10.

Seattle will absolutely dominate Minnesota on the ground, while surprisingly shutting down Dalvin Cook on the other side. Seattle wins 29-19.

The Saints have dealt with quite a bit in quite a short amount of time, and despite their struggles and despite the naysayers, they are still standing and are still in position to take the NFC South. They now return home for another primetime showdown, their third in five weeks, this time against Drew Brees’ former franchise, the Chargers, to whom Brees has never lost. You’d better believe Brees will play his best to keep that success going. It’s the Saints defense that will need to hold up their end of the deal, though.

Sean Payton’s Saints have historically struggled against first-round rookie quarterbacks, and the next in line stepping up to try his arm against the Saints is Los Angeles’ Justin Herbert. Herbert has surprised with big games and a big arm but has no wins to show for it. The Chargers have looked good with Herbert under center but they just haven’t been able to close. The Saints defense cannot allow themselves to be the team that helps Los Angeles figure it out.

Victory for the Saints starts in the trenches. The offense line, despite injuries, has to keep pressure off Brees, giving the offense time to get to work. The defensive line absolutely has to get pressure on Herbert in order to help out the secondary, which has needed all the help it could get this season. The Saints will win along the lines and because of it, they will win the game. Saints win 34-30.

There we go, Week 5 is shaping up to be pretty interesting. Leave us your picks, comments, and insight below!