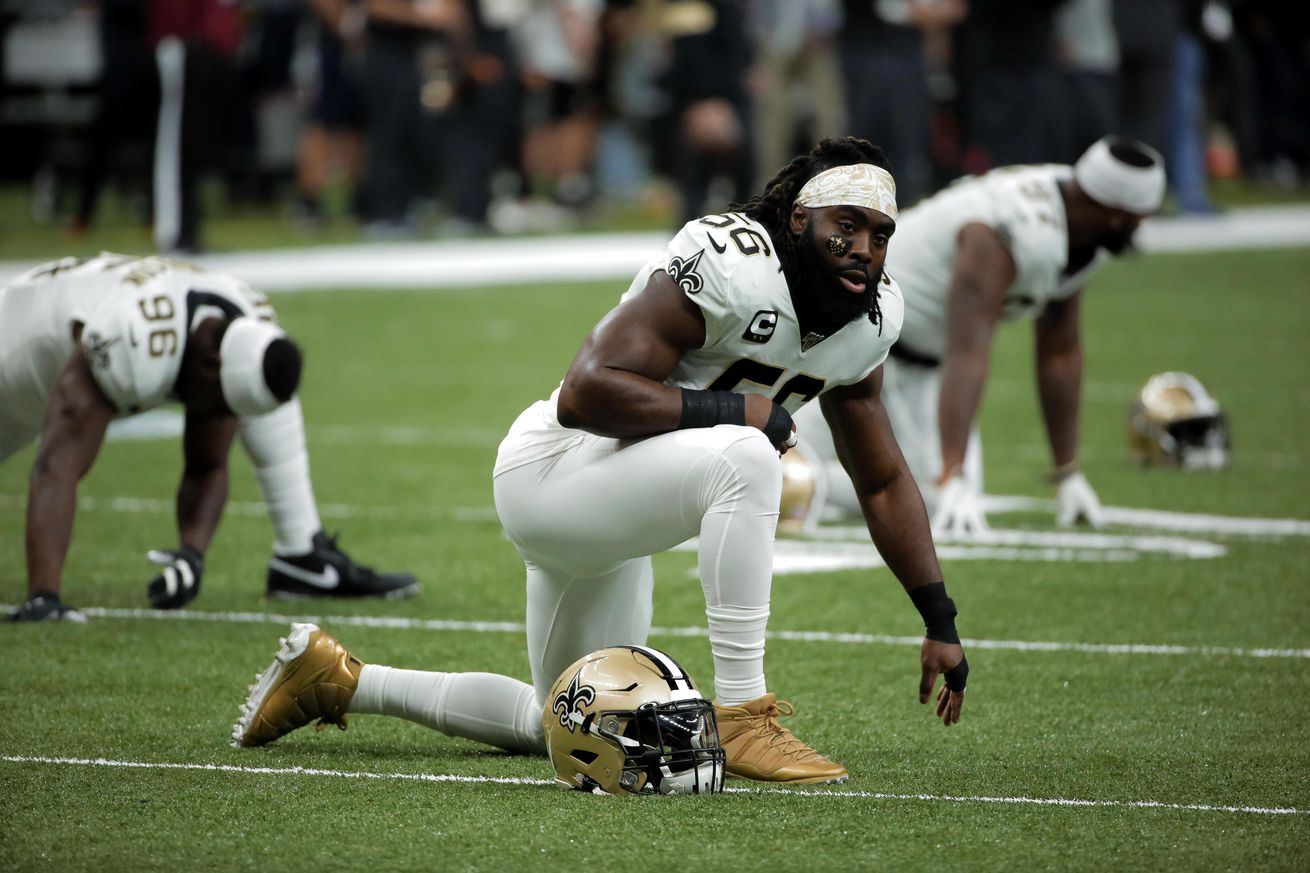 Demario Davis is a stud, but it takes more than one superstar to make a unit

Much like the other units on the New Orleans’ Saints defense, linebacker has been a surprising strength for the Saints — Although it’s possible the surprise diminishes once you stop and consider the departure of Joe Vitt and the entrance of Mike Nolan as linebacker coach in 2017. With Nolan departing to become defensive coordinator for the Cowboys this offseason, the Saints will turn to Michael Hodges to coach up their linebacking corps.

To start to understand the importance of linebackers for the Saints, you have to look at how Dennis Allen runs his defense. All-Pro Demario Davis racked up four sacks and nine hits last season for the Saints, in addition to leading the team with 111 tackles. Davis tacked six more hurries onto that number, and he was one of the Saints’ most effective blitzers last season, not to mention one of the best blitzing linebackers in the league.

Allen doesn’t run what you’d call a traditional 4-3 or 3-4 defense. He brings different personnel in for different situations (as most modern coordinators do). Davis was the Saints’ “every-down” linebacker, while Allen rotated players around him. Davis’ pass-rushing numbers are so high because he excels in rushing on passing downs, something Allen used throughout the year.

Around Davis, the Saints had a solid unit at linebacker, despite needing a couple of iterations throughout the season. A.J. Klein saw about 70 percent of defensive snaps for the Saints, and his pass coverage was invaluable to the Saints allowing Davis to run free. Kiko Alonso was a touch about 25 percent at 27, while Craig Robertson was around 17 percent. Manti Te’o and Alex Anzalone were good when they were on the field, but it’s abundantly clear that neither can be trusted to play a full season.

With Klein about to hit restricted free agency, the Saints now have a problem. Although Alonso will be back next season and, when healthy, he’s also an excellent addition to the Saints’ linebacking unit, the Saints will ultimately have a lot of names on the front seven that are susceptible to injury. Te’o, Anzalone and Alonso are all good names on paper, but they have to be on the field.

While all of the talk this offseason has been about the wide receiver position — and for good reason — the Saints really need linebacker help as well.

If the Saints are going to make a splash in free agency, it should really be here. And the priority needs to be for a coverage linebacker.

This is the most obvious option. The going rate for a top inside linebacker a la Bobby Wagner or C.J. Mosley is in the $17-18 million range for 2020. It would take a lot to wrest Littleton from the Rams — He’ll likely get a contract between $12-14 million a season. It would take some cap magic to ultimately make this deal work, but to get one of the NFL’s best coverage linebackers alongside LaVonte David to replace Klein’s strong off-ball play, it could be worth it.

This might be a more realistic target for the Saints, albeit a far less enticing one. Bradham had his ups and downs in the 2019 season, although he still played well in coverage. At 30, Bradham would come at a far cheaper price, but the Saints would be losing something in run defense if he got a ton of snaps. While this would be a more conservative pickup for the Saints, it’s definitely a “get what you pay for” situation.

Keep in mind that in the NFL draft when it comes to linebackers, for every Roquan Smith or Jaylon Smith there are 12 Reuben Fosters. With that being said, it may be worth spending an early pick on a linebacker this season.

Arguably the top linebacker in this year’s draft, Kenneth Murray logged an insane 155 tackles in 2018 and put up another 102 last season. Murray is the kind of player who always finds himself in he middle of the play, which the Saints could really use in the running game. His speed an familiarity with zone defense could make him a perfect fit for the Saints alongside Davis.

Brooks is a guy you take on Day 2 if you REALLY trust Hodges to step in and continue Nolan’s excellent work. Another linebacker with a nose for the ball, Brooks has some issues in coverage. He can move around formations if utlilized properly, but he’s definitely more of a project pick than Murray (who the Saints would possibly need to trade up for).

This isn’t a great year to have linebacking needs. There aren’t any transcendent draft talents and the free agent market is top-heavy, so bidding will be fierce. However, if Klein leaves in free agency the Saints have a very real hole to address. While they aren’t completely cooked, asking Alonso, Anzalone and Te’o to stay healthy is a stretch. Alonso tore his ACL against the Vikings, so it’s possibly he won’t be 100 percent heading into next season.

The Boring (But Possibly Correct) Option

Bringing A.J. Klein back is probably the Saints’ best choice. He won’t command Littleton money, but it will take over $10 million a year to bring him back. Klein had the best season of his career in 2019, logging 45 tackles and 2.5 sacks, not to mention in pick-six in the final game of the season against the Panthers. Klein has been solid for the Saints for the past three seasons — particularly in coverage. There’s something to be said for continuity — especially on a defensive unit as close-knit as the Saints’ — but ultimately it’s going to come down to who pays Klein the most in free agency.

Thinking ahead, an extension for Davis is also likely in the works. 2020 will be the last year of the three-year deal that the Saints signed him to, and he’s due to make $9.9 million next season. Expect his cap number to only go up in 2021 and beyond if he and the Saints agree on a long-term deal.

There’s a lot of potential in this group if it finds time to gel, but that takes reps. Davis will continue to play well for the Saints, but he needs consistent help around him. If the Saints can find it, whether it’s by retaining Klein or adding someone elsewhere, the Saints’ defense could continue to thrive in 2020.