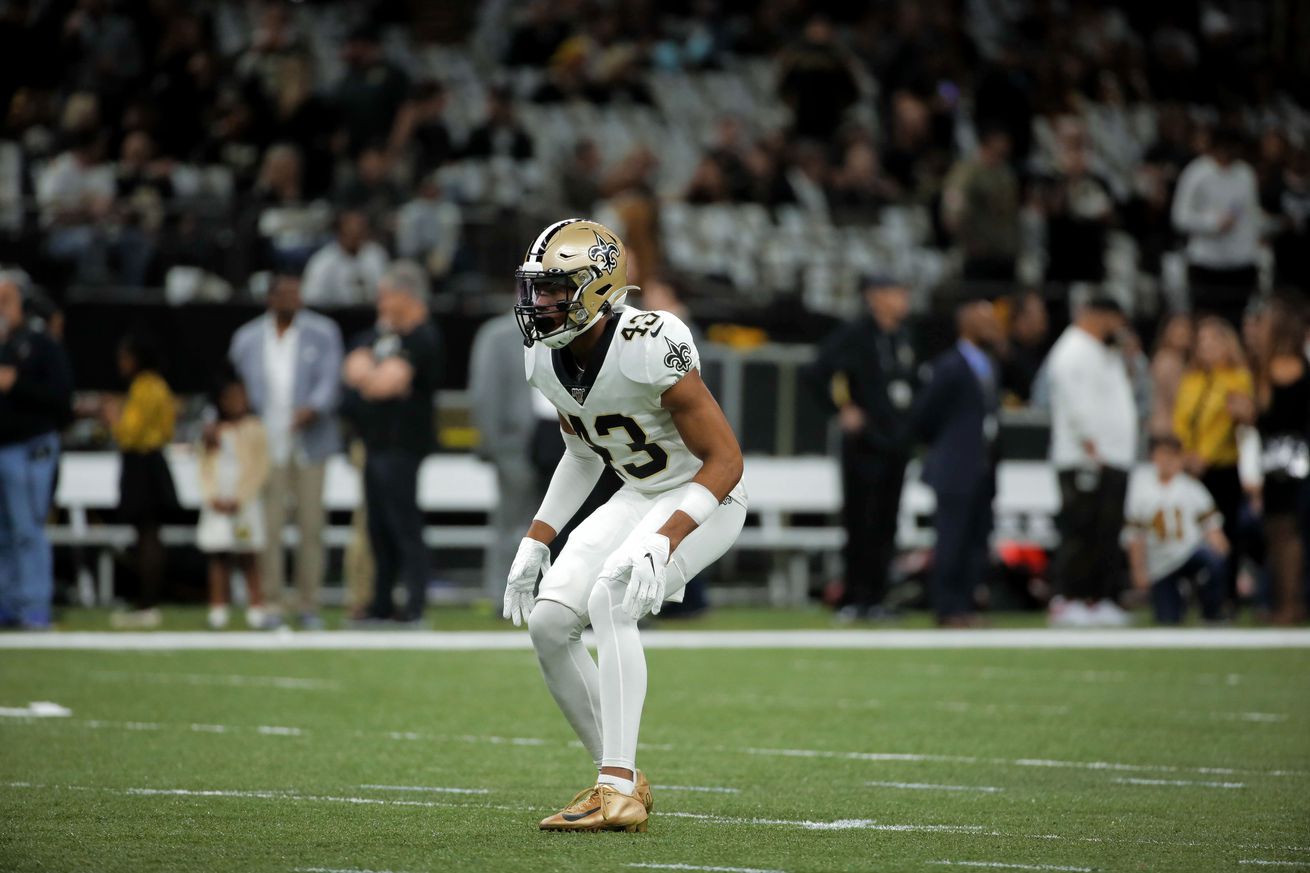 Marshon Lattimore is locked in, but there are questions around the rest of the unit

Cornerback has long been a question mark of a position for the New Orleans Saints. While Marshon Lattimore is the clearcut No. 1, the guy opposite him has some more doubt cast over it. Eli Apple has had his ups and downs for the Saints since they traded for him in 2019, and Janoris Jenkins will be a free agent in 2021. P.J. Williams also gives the Saints an interesting conundrum to handle this year.

The three cornerbacks currently on roster for the Saints are Lattimore, Jenkins and Patrick Robinson. Robinson has spent the past two years on and off the injury list for the Saints, and even when he’s been on the field he hasn’t been able to replicate the level of play he achieved in Philadelphia with the Eagles.

Lattimore will command big money once he hits free agency in 2022, so the Saints will need to build the position group around that to a degree. However, with Drew Brees in the twilight of his career, there’s no reason to hold money close to the chest until he retires.

The Saints have the same options as ever at the cornerback position: Free agency, the draft or stand pat.

There are some big-name cornerbacks hitting the market this season, a few of which would address the Saints’ continuous bugaboo that is the slot corner position.

While Jones is an enticing choice, he’s likely to set the market for cornerbacks this offseason. Jones has been an excellent corner for the Cowboys, and has even given Michael Thomas fits in the past. There are a lot of teams that will be interested him, but a lot of evidence as of now is pointing to the Eagles, who are likely to pursue several of the major cornerbacks hitting free agency.

Jones will be turning just 28 this season, and he’s been among the Top-15 cornerbacks graded by Pro Football Focus in each of the past two seasons. He’ll be expensive, and the Saints would have to bid, but he may be a better long-term solution than Jenkins.

Harris has become one of the most established names in the NFL when it comes to covering slot receivers and, more recently, star receivers. Harris has been excellent in Denver throughout his career, though he had his ups and downs in 2019. Harris would be a huge risk in free agency, as he’ll still get good money, and the Saints would be competing against the Eagles, who are rumored to be pushing hard for him. Signing him is hoping for a bounce-back season which, at age 31, is far more risky.

Ryan was part of a Titans defense that made huge strides in 2019, but that will undoubtedly inflate his value heading into free agency. Ryan had a career-best season in many ways last year with the Titans, including four forced fumbles, a stat that Saints fans would like to see added to their roster. Ryan was excellent in 2019 for the Titans, but he may ultimately end up being too expensive. With that being said, if the Saints could get him with another relatively cheap season of Lattimore, they would be set at cornerback for the next few years.

Waynes would be a cheaper option for the Saints should they decide to got that route. The former Viking has had a tumultuous start to his career, showing flashes of brilliance amid his share of struggles. The Saints could move him around the formation, but whether or not they want Waynes would ultimately be decided by how much the Saints trust Dennis Allen.

No, the Saints are not getting Jeff Okudah to add to their already solid stable of Ohio State defensive backs. However, should they want to aim high this year, there is another Buckeye option: Damon Arnette. Arnette contributed to an Ohio State defense that was among the best in the country last season, but Arnette does have some non-football issues. Teams have questioned the mental component of his game, but his talent is undeniable.

Arnette is one of the few corners on the board who could make a Day 1 impact for a team, but Trevon Diggs out of Alabama could also be a solid centerpiece.

With Eli Apple and P.J. Williams hitting free agency, the Saints could simply stand pat and re-sign them while going with the corps they had last season. The unit has earned some trust among fans, but Apple’s ongoing issues with holding and Williams’ propensity to get beat over the middle is also a reason to have pause. If the Saints keep going forward with Lattimore, Apple, Jenkins, Williams, break-out rookie C.J. Gardner-Johnson and Robinson, they need to figure out a way to help them more in coverage. The talent is there, but with the way flags are called, the ability to shut down one receiver isn’t enough.

Gardner-Johnson is another question mark for the Saints, as he had a solid year, but also drew quite a few flags. The Saints may task him with covering the slot if they stay with Jenkins outside, but time will tell how he will settle into an increased role.

While Apple and Williams likely wouldn’t take a ton of money to re-sign, Mickey Loomis also needs to ask himself if he’s happy with the pass coverage the past two seasons. They were 19th in the league last year in pass defense, which could be good enough. However, with Brees on the back end of his career and a potential drop in point production next year, it’s worth exploring other options as well.