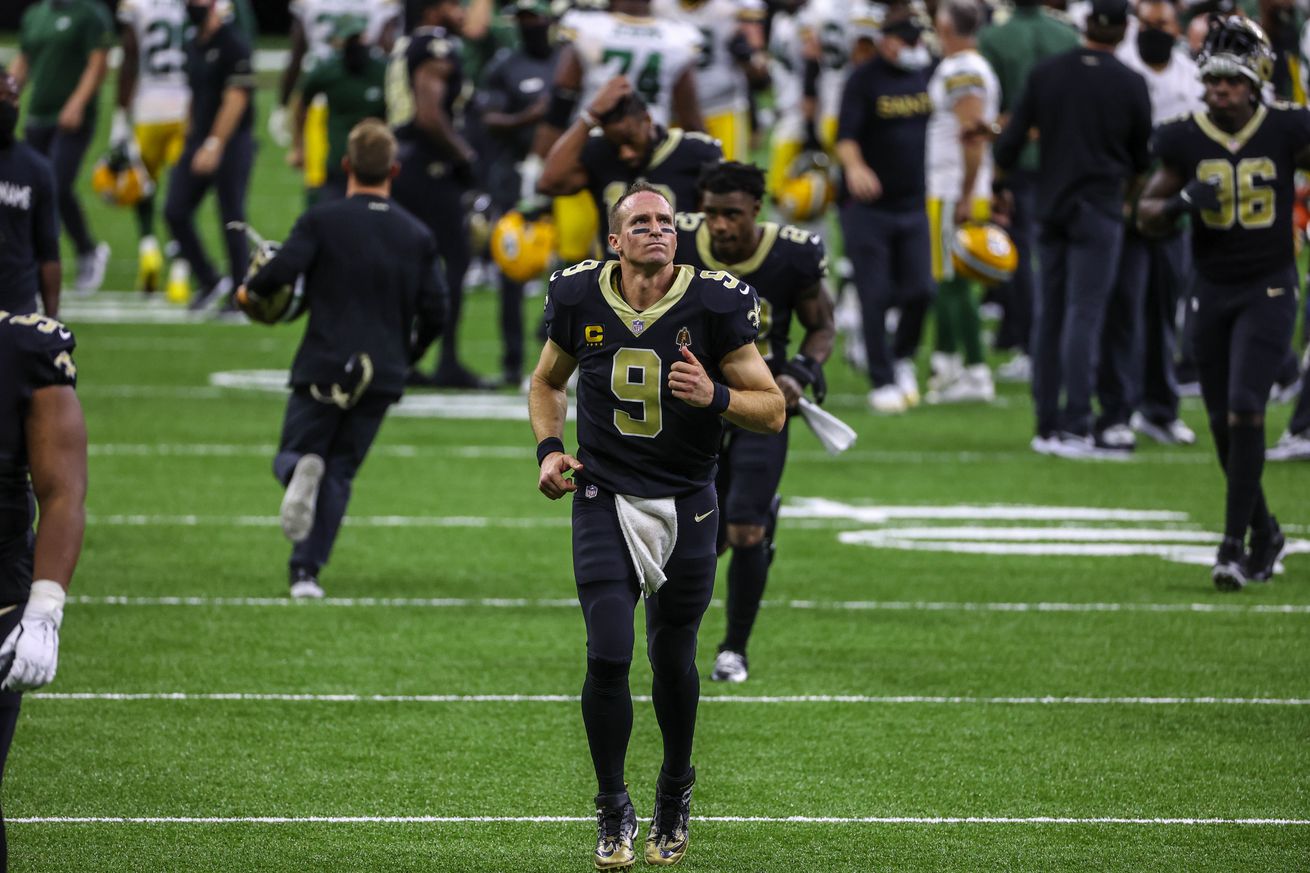 Key leaders of the New Orleans Saints dissect the disappointing start to the season and how to right the ship moving forward.

Despite stronger gameplay, overall, in the New Orleans Saints 37-30 loss to the Green Bay Packers on Sunday Night Football, the team just can’t seem to hit its stride. The cries of Drew Brees’ critics only get louder by the week; while he wasn’t necessarily to blame for the Week 3 loss, Brees certainly needs to step it up to duel against Matthew Stafford and the Detroit Lions’ aerial game. Here’s what key players had to say about another disappointing week for the Saints, and the team’s diagnostic assessment to collectively improve their gameplay.

Sean Payton’s response to @nick_underhill question about their inability to defend those bootlegs pic.twitter.com/3whQjpjnDS

The (hilarious) above video of the hour really illustrates the collective frustration by players and personnel on the Saints unsatisfactory play this season – on both sides of the football.

While the offense still left much to be desired on the field, the Week 3 improvement was nonetheless palpable – particularly Brees’ connection with Emmanuel Sanders. Though Taysom Hill’s late fumble in the 4th quarter stifled any chances of a Saints comeback, prior to the possession loss, Sanders finally felt like he, “found [my] groove.”

“This game I settled in, I learned my splits, I kind of grew in offense. I figured out what I was studying wrong, or what I was studying right, and what Sean Payton wants and what he didn’t want. I feel like I found my groove this game. So I’m looking forward to continuously studying and getting in the groove with Drew and seeing how far we can take this because we got a lot of ball left.”

Though the mood through Weeks 2-3 has decidedly been morose, players aren’t ready to sound the alarm just yet; Sanders furthered his postgame remarks to reiterate his confidence in the team moving forward – as long as they can get a grip on the sloppy penalty-ridden play.

“The mood is we got a lot of ball left to play. And there’s no reason to hit the panic button. But we got to correct the mistakes. We’re going to go we need to play a smarter brand of football. We got to get rid of the penalties. We’ve got to get better on offense, defense and special teams. We just have to grow and get better.”

“We all have to do more,” – Kamara #Saints pic.twitter.com/TlQCVPs8Qs

Brees echoed Sanders’ sentiments regarding their increase in chemistry; quite reminiscent of his slow burn with Jared Cook last season, Brees still feels he can do a better job of, “getting the ball in [his] hands.” The resounding criticism of Brees has centered around his either hesitation or inability to throw deep downfield. When asked about his somewhat timid play as of late, Brees sharply noted that his job isn’t to win people’s fantasy leagues (much to my dismay) – it’s to execute and win football games, sexily or not.

“We called a couple shot plays today. And unfortunately, we just got, again, bad looks. I think I got sacked on one. And that actually, ironically, the second one was the one where I threw it to Alvin Kamara and he went 52 yards for a touchdown. So, I don’t care how far I have to throw the ball down the field. My job is to make good decisions. I’m not going to force it if it’s not there, check it down, put in the hands of our playmakers and let them do what they do.”

Despite the consensus that the Saints were uniquely prepared for this season’s adversity due to continuity and veteran leadership, their so-so play has been a massive disappointment; unsurprisingly, Brees was tasked to analyze their surprising slow start.

“I think, listen, if you’re a veteran player in this league, you know that you’re not guaranteed anything from year to year. You got to come out, you got to earn it, each and every time out. And I think, obviously, based on the last two losses in consecutive weeks. I think, you know, we have to take a hard look at, you know, what we’re doing, how we’re doing it. And we need to be doing it better, you know, bottom line. And, you know, be as efficient as we possibly can, create a great sense of urgency. Listen, I love our team. I love the way we work. I love the way we prepare. But there’s obviously some things that need to be corrected so that we can get back on a winning track.”

Have to be the most desperate team and it starts with me and our defense. Whatever it takes. More!

We’ve covered the offensive woes – it’s the defense that has been a black-eye on the Saints’ 2020 season record. A surprising development this season has been the essential invisibility cloak Cameron Jordan has donned the last two weeks. Jordan is the first to criticize his performance; while crediting New Orleans’ ability to stop the run as their best play thus far, he admittedly pointed to his lackluster play – specifically, the penalties – as not particularly helping matters.

“So far, I feel like stopping the run is sort of what we done [best]. And at the same time, you got to be able to do more, we’ve got to put ourselves in favorable positions in terms of third down battles, where we can get them to actually try and be pocket quarterbacks instead of these quick routes. I don’t think I helped in terms of the two offside penalties I’ve had in the past two games. And that’s something that you have to look at it and get better for.”

The buzzword of the season is quite obvious – penalties. The slew of flags has killed any chances of New Orleans gaining momentum or control of the last two games; veteran safety Malcolm Jenkins lamented on the lack of discipline displayed by the team that has culminated in so many penalty yards, noting, “talent really doesn’t get you much in this league on paper, especially when you’re as undisciplined as we’ve been playing lately on defense.”

“I think we’ve got the guys to execute and do what we need to do, but a lot of it has been just a lack of discipline, whether it’s penalties, your assignments here or there. It’s really just been hurting us, but we’ve got a whole season. It’s still very early and there’s things that we can correct, but we’ve got to do it and got to get it fixed if we want to be the team that we set out to be.”

Jenkins’ position group in particular has been a source of woes as of late; after letting Darren Waller shred up the Saints’ secondary in their loss last week to the Las Vegas Raiders, the safety group yet again fell short attempting to stifle Allen Lazard on Sunday night. Sean Payton specifically pointed to their failure in, “quarter’s coverage, it’s third down, I think that it’s third-and-10. It wasn’t very good,” when asked to dissect the 72-yard reception by Lazard. Like Jenkins, Payton criticized the sloppy play that’s riddled the team, particularly when on defense.

“It has to be corrected. We jump offsides and allow him (Aaron Rodgers) another play on third down (and give up a touchdown). All week long we talk about discipline and cadence. It’s a great opportunity for us to get off of the field and force them to kick a field goal. When you get a free play like that, you throw it up and the play gets extended and it becomes difficult on the cornerback. Right now, we are leading the league in those calls.”

Ultimately, the Saints are having a bit of an identity crisis; Payton admitted as much, “to some degree.”

“You are frustrated as a coach because that starts with us. We’ve got to do a better job. We’ve got to get ready to play a better game against Detroit. That’s our industry. We are 1-2 right now. It’s been awhile since we felt that; and, yet, three years ago we were 0-2. It’s a little bit of a gut check. Yet, we are not playing well enough. Let’s not fool ourselves, we are making too many mistakes and we are not playing disciplined enough on both sides of the ball. That is really just the truth.”

New Orleans is looking down the barrel of a 1-3 start that may be insurmountable should they fall to the Detroit Lions next week. Here’s hoping they engage in some serious team building exercises on both sides of the ball in order to find their groove, or delve into some voodoo rituals should it come to that.