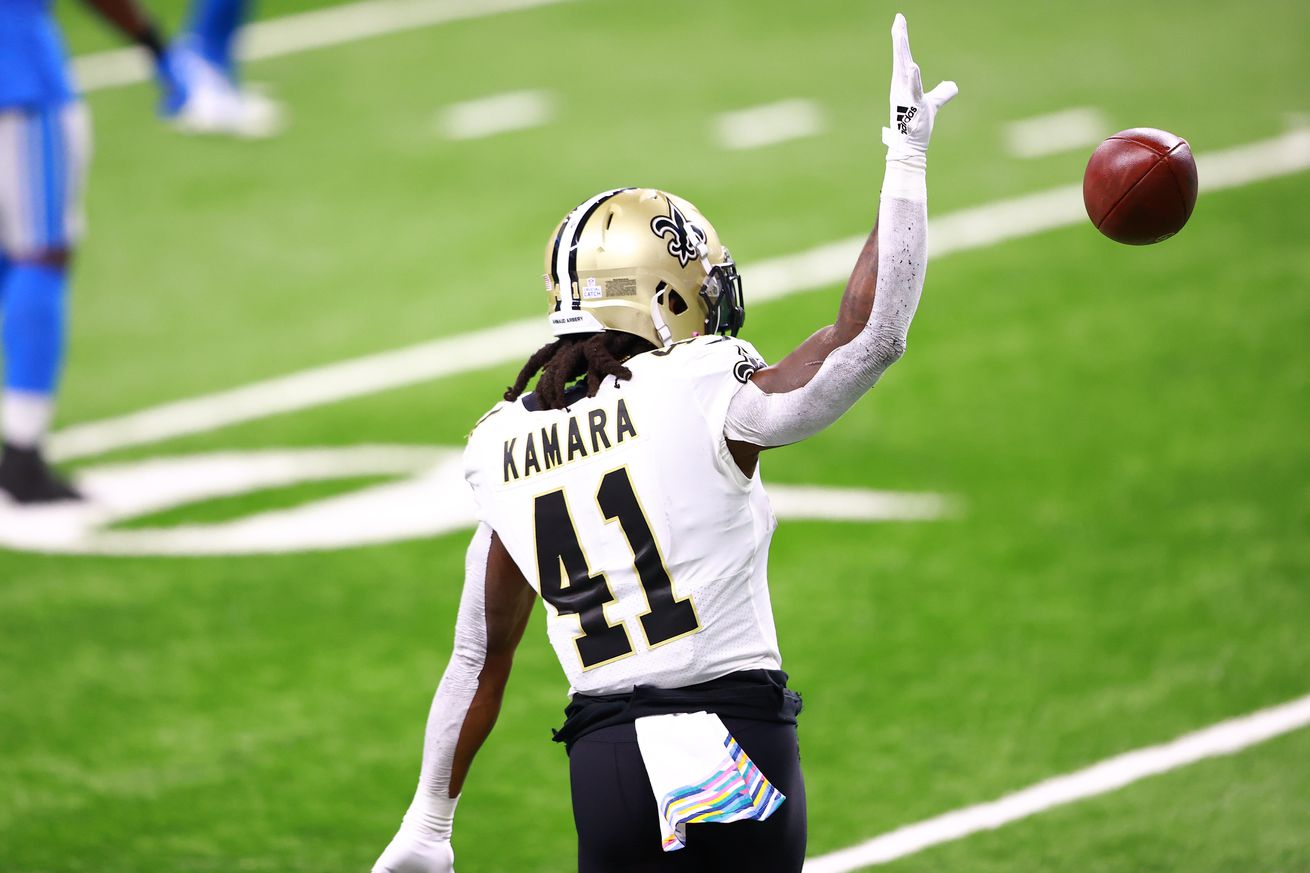 With four games down, we picked our quarter-season MVP, OPOY, DPOY and more.

A quarter of the way through the season means that we all have enough of a sample size to start making more general assessments of the team. After opening up with many questions about the offense, Drew Brees’ arm, and the defense, the Saints have silenced some of their critics. Though not all as the defense continues to look a little shaky aside from a couple of bright spot players. Those players as well as some star power on the offensive side populate this list of our Saints 2020 quarter-season awards.

Maybe not the name you were expecting here by hear me out. Ryan Ramczyk was taken out of the Saints’ week four win against the Detroit Lions in the fourth quarter. In that game, the Saints averaged 3.9 yards per carry including 4.4 and 4.6 by Alvin Kamara and Latavius Murray respectively. After Ramczyk was taken out of the game, the Saints averaged only 2.9 yard per carry and took a sack in the passing game. The run game to the right side of the offensive line in particular was nearly erased during those drives. In 2019 for instance, Ramczyk cleared the way for an average of 5.4 yards per carry on runs headed his way. This year the number is currently at 3.7, but rising with each carry that the former first-rounder is on the field. He’s also started out this year well in pass protection allowing only four pressures comprised of just one hit, three hurries, and no sacks. Without Ramczyk, the offense can completely stall out. That’s value.

Kamara could easily be MVP as well, but the fact of that matter is that Saints couldn’t even produce with him when Ramczyk had to exit last week’s game. But there’s no shame in being an offensive player of the year through the first four games. I also believe he should be the frontrunner in the league’s end of year award as well. He leads the league in scrimmage yards and touchdowns, leads all running backs in receiving yardage, and has put together some outstanding highlight plays while keeping the Saints offense moving without last year’s OPOY WR Michael Thomas. He’s averaging 4.7 yards per run, 7.6 yards per catch, and a whopping 80.3 receiving yards per game. The incredible thing is that he’s creating much of this offense on his own, particularly in the passing game. Of Kamara’s 321 receiving yards, only 13 have come before the catch. Kamara is back and healthy for 2020 and if he continues this production, he’ll be on OPOY lists throughout the season and maybe earn some of that non-QB MVP attention too.

I was originally going to go DE Trey Hendrickson here but after some time to think about it, I had to go with my gut. Hendrickson has been productive starting in place of DE Marcus Davenport for the first quarter of the year. But everything Davis does simply can’t be matched. 26 total tackles, four for a loss and a pair of sacks as well. But what makes Davis special is all of the work he does all over the field. No one has been a better communicator and leader on this team than Davis. When the Las Vegas Raiders were dicing up the Saints with Darrin Waller, Davis was the only defender that could stop him. Unfortunately for the Saints, the linebacker’s role is pivotal to the defense that when they asked him to man up on Waller, the rest of the defense fell apart. Hendrickson has three sacks and yes, that’s great, but we’ve also seen other players produce from his stop in rotation. The Saints wouldn’t dare take Demario Davis off the field. That’s DPOY stuff.

Not a long list of players to choose from here, but between DT Sheldon Rankins, LB Alex Anzalone, and DE Marcus Davenport, Anzalone is the player that has had the best return from injury thus far, albeit very inconsistent. Despite his high grades in popular analytics, his play on tape has been a bit up and down. But the ups have been rather impressive. He’s shown flashes of playing incredibly well sideline-to-sideline and, in a couple of games, has played well in coverage save some questionable penalty calls. In others though, he’s been lost in coverage while playing well in his run fits. So there have certainly been ups and downs from the fourth-year linebacker so far, but enough to expect continued improvement considering he missed the majority of the 2019 season and had three weeks on his feet before week one of this year.

Now we get to our own superlatives. This category differs from Comeback Player of the Year in that the criteria shifts from returning from injury to year-over-year improvement. With that, 2018 third-round pick Tre’Quan Smith is the easy answer. With Michael Thomas out, Smith has been used in his role as well as all around the offense. He’s made tough contested catches, created separation, and has been a reliable option for Drew Brees. Just look at the comparison of his receiving production over the whole of 2019 and through four games here in 2020:

In less than half the games, he’s beyond 3/4s of his 2019 production in catches and yards. On top of that, he’s shown consistency with three games of four with more than 40 receiving yards. A mark he’d only surpassed five times in total over his first two seasons.

I’ll be the first to say that Lattimore will turn his corner soon this season. But through the first four games of the season, he’s struggle in two of the three for which he’s been available. Before missing last week with a hamstring injury, Lattimore has been credited with a perfect passer rating (158.3) when targeted. In week one against the Tampa Bay Buccaneers he held his son, wide receiver Mike Evans to no catches while in primary coverage yet again. However, over the following two games he’s been credited with letting up a catch on all eight of his targets for 138 yards and a touchdown. That’s an enormous 17.25 yards per catch allowed over that span. He’s shown some lapses in concentration that have plagued him in the past. Now, after a week away there’s hope that he’ll return to square up with one of the best receivers in the game in the Los Angeles Chargers’ Keenan Allen. This is a game that could either snap Lattimore back into his elite self or solidify the struggles we’ve perceived as of late. There is something to be said about the fact that he’s only been targeted 12 times this season, though. So there’s reason for optimism.

This title sounds worse than it really is, at least at this phase of the season four games through. This really comes down simply to availability. There is hope that the 2018 first-round pick can return to the field Monday against the Chargers, but it’s hard to get hopes up considering the whirlwind already experienced with Davenport’s health. He started the season with an elbow injury that was expected to be a short-term deal as evidenced by the Saints not putting him on IR for three games. He’d then go on to miss the first three games and get back to the practice field only to suffer a toe injury that kept him inactive against the Detroit Lions in week four. The hope is that he will debut for the 2020 season on Monday Night Football. Davenport is an immensely talented player when on the field, a drive-ender. The Saints could use his talents to help bolster the lacking late-game pass rusher. In each of his first two seasons, the former UTSA Road Runner has missed three regular season games not including the game in which he was injured. With availability being his biggest downfall, ideally he’s missed his quota of games for the 2020 season. The Saints are better with him on the field.