Saints running back Alvin Kamara met with head coach Sean Payton on Wednesday to clear the air, as Ian Rapoport of NFL.com tweets. Kamara is expected to practice with the team this afternoon as his camp continues extension talks with the front office. 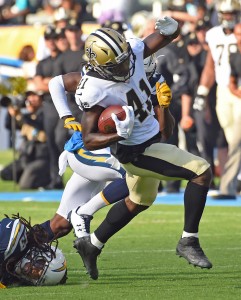 Kamara isn’t seeking Christian McCaffrey coin, but he wants something better than the Saints’ most recent offer of $50MM over four years. That deal would put him in line with Titans star Derrick Henry, but Kamara is aiming higher.

The Saints don’t consider Kamara to be untouchable, but they’d reportedly want a first-round pick in exchange for him. For now, it seems like the two parties are on okay terms, but it’s definitely something to file away. Even if the Saints don’t move Kamara between now and the season opener, they could explore trades all the way until late October.

Kamara’s salary demand isn’t quite clear, but he’s probably seeking something that puts him in between McCaffrey and Joe Mixon‘s recent extension.

Only four players have outgained Kamara from scrimmage over the past three seasons, and Kamara’s 6.1 yards per touch betters the three running backs ahead of him. But, in the interest of equal time, Kamara’s per-catch average has also slipped in each of the last three seasons. After averaging 10.2 yards per grab as a rookie and 8.8 yards per catch in 2018, Kamara posted just 6.6 yards per reception in 2019.