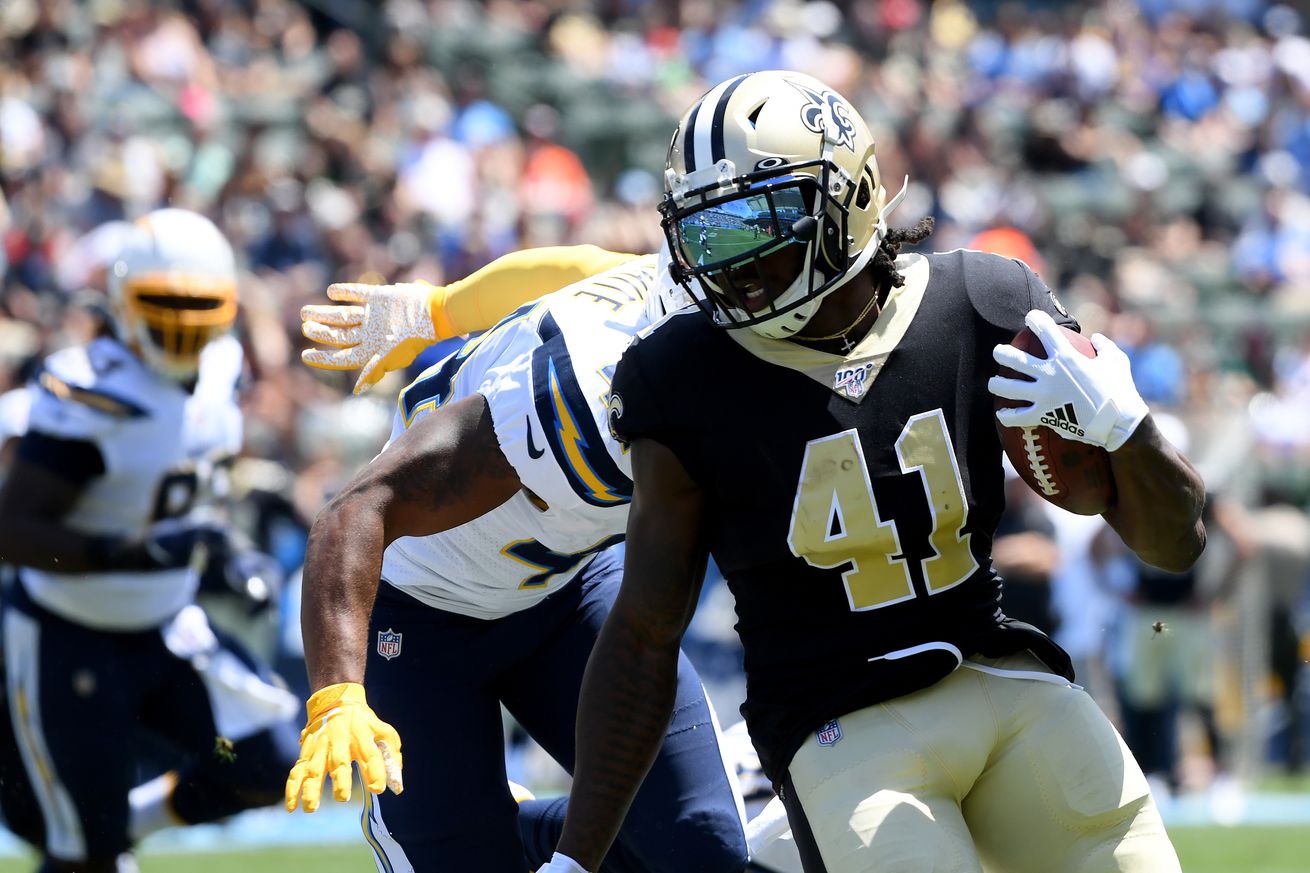 No Austin Ekeler means the Chargers will be relying on a pair of backups at running back.

Another week of football, and another week of our Interview with the Enemy series. This week, Michael Peterson of Bolts from the Blue answers 5 quick questions before our Week 5 matchup: the New Orleans Saints hosting the Los Angeles Chargers on Monday Night Football.

What will this Chargers offense look like this week with no Ekeler and a rookie under center?

Even with Ekeler out for the foreseeable future, I don’t see the Chargers offense changing all that much. If anything, I expect the offense to struggle maintaining drives without the elite yards-after-catch ability that Ekeler brings to the table. Joshua Kelley isn’t nearly as elusive in the open field and Justin Jackson hasn’t looked like his old self since he’s been struggling with lower-body injuries throughout the last year.

As far as the play-calling, the Chargers may decide to throw it a bit more and get the younger receivers more involved. Kelley and Jackson aren’t ever going to push for double-digit targets and that means there will be more targets for others in the offense.

Following his small breakout against the Bucs, wide receiver Tyron Johnson is probably a guy you may see a lot more of on offense this week. Anthony Lynn wants more speed at the receiver position and Johnson showed the ability to get behind a defense. That’s an easy recipe for more snaps under Lynn.

Defensively, there aren’t a ton of guys that the casual fan wouldn’t know, but I’ll go ahead and name linebacker Kyzir White. He hasn’t played a ton over the last two seasons but he’s finally found his stride and has played almost every snap during the past three games. If someone hasn’t much of him as of now, they’ll know plenty by the end of the year.

Justin Herbert throws for another three touchdowns and the defense records a season-high in takeaways (3 or more).

If you were Sean Payton, how would you game plan to attack the Chargers defense?

I would feed Alvin Kamara the football early and often. While the Chargers have a pair of athletic linebackers, they both have struggled so far in coverage through Week 4. If the Saints have any elite speed, I’d go ahead and use it to stress the team’s slower corners, Desmond King and Casey Hayward. Hayward is coming off one of his worst games in recent memory and he hasn’t been able to keep up with top-class athleticism this year. Gus Bradley’s defense is Cover 3 heavy and is the typical “bend-but-don’t-break” defense. If Michael Thomas is able to return, his skillset will drive the Chargers defense crazy with the way he’s able to pick up intermediate chunks over and over again.

think the Chargers may finally come back down to Earth on offense against a stiff Saints defense that gave Tom Brady fits in their Week 1 matchup. Without Ekeler, I think the Saints’ front seven will have no issue stopping the run, which will frustrate Anthony Lynn quite a bit. If the Chargers are without offensive linemen Trai Turner and Bryan Bulaga, it’ll be another tough outing for Herbert in the pocket once again.

In the end, I think the Saints will win this one, but not without a few scares courtesy of the Chargers. Until proven they can take care of the ball, I predict there will be at least one turnover that crushes some form of momentum in the second half, leading to the team’s fourth-straight loss. Saints win 27-17.