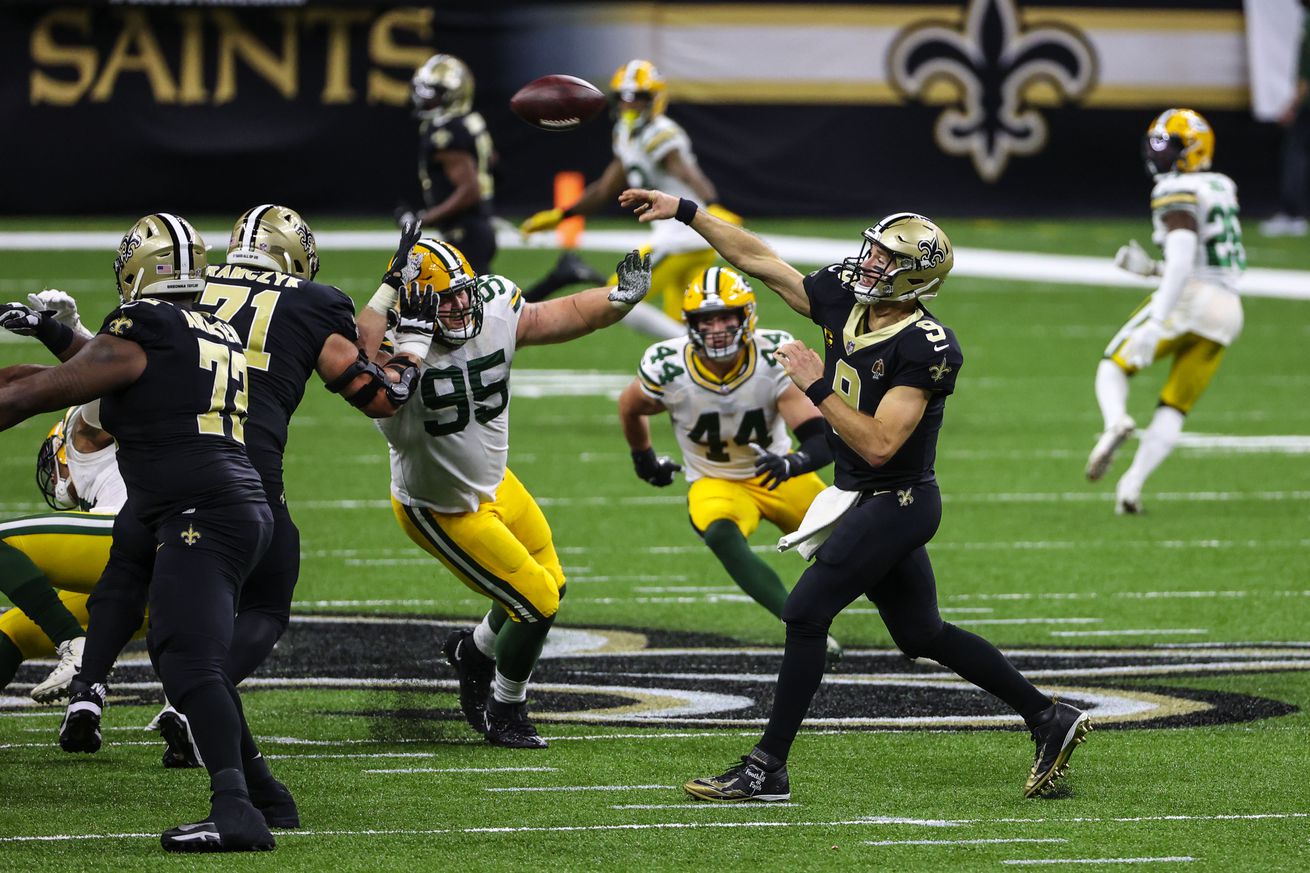 Matt Patricia, a Bill Belichick disciple, is going to stick to his guns and play Cover 1 man a lot Sunday. The Saints should have numerous opportunities to attack them as long as they can hold up in pass protection.

While they aren’t particularly great against the pass, they are a defense is very confident in their scheme, and by God, they stick to it.

Among all the ways he tries and fails to be just like his former boss, playing a boat load of Cover 1 man coverage on defense is maybe the way he most closely resembles him.

While the usage may be comparable — both are top five in Cover 1 usage rate in 2019 and 2020 via Pro Football Focus — the success has not been.

The New England Patriots were one of the best, if not the best, pass defenses in the league last year, allowing four pass TDs all season.

They also were first in Estimated Points Added (EPA) allowed per dropback. The Lions were 30th.

The Pats run a lot of Cover 1, but the Lions are on another level. They led the league last year at just over 45 percent, but this year they’re first in the league at over 54 percent.

It’s pretty wild for a defense to run one coverage that much.

The only problem for them is that it makes it much easier for their opponents to game-plan for them. And that bodes well for Drew Brees and the Saints offense.

They typically will show their hand when they’re in a one-high coverage look.

A lot of the time, they’ll play press man on the outside when they go Cover 1, so it’s pretty easy to recognize the look.

And if not, then a simple motion should identify it if a defender follows the receiver motioning.

Once identified, the Saints have many ways they can attack this coverage. And they’ve shown the ability to do so effectively so far this season.

According to PFF, Drew Brees is 14/21 for 122 yards, two TDS and zero turnover-worthy plays when facing Cover 1 so far this season.

Now, we know the basics of a Cover 1 look: One high safety, one middle robber/rat player, four rushers and man to man across the board.

While that is often the way it’s played, there are many variations. You can shade the safety over one side, double a slot receiver with the robber/rat player, bring five rushers or spy the QB with a linebacker while every one is manned up and the safety is back.

I’ve seen the Lions deploy many different looks on tape, including the ones mentioned above and others.

They’ve run Cover 1 with a linebacker planted in front of the QB basically reading his eyes; they’ve run it with three rushers, a double team on Allen Robinson and a QB spy; and they’ve run it from a two-high safety look where one safety comes down to play the robber role in the middle of the field and the other rotates to the deep middle.

For The Win’s Steven Ruiz wrote a hell of an article about divider leverage and position maintenance when the Pats run Cover 1, and how great they are at it, a while back:

I wrote about why the Patriots defense is so good.

To be more specific, I wrote about why the Patriots are so good when playing what Nick Saban says is ‘the best coverage in ball’ … Cover 1. https://t.co/vAMoOOnXcS

In it, he defines the situations in which a man-to-man defender should have outside or inside leverage on a receiver when in Cover 1:

So you would think in Cover 1, since there’s a safety in the middle of the field, the M2M defender should always keep outside leverage. That’s not always the case. If the receiver lines up wide and close enough to the sideline, the defender is supposed to switch his leverage to inside, because the safety can only cover so much ground.

That’s what these lines are. Color-coordinated, these lines are supposed to indicate where a defender should switch their leverage to inside. The green line is four yards under the numbers, and the blue line is two yards under it.

The Ball is lined up to the far left hash, and Deandre Hopkins needs to be more than four yards to the left of the numbers for the defender to take inside leverage.

He isn’t, so the corner takes outside leverage, playing to his help in the middle of the field.

This sometimes makes it tougher to run out-breaking routes against the one-high safety look, which is what you would think would be smart to do against that coverage.

And then on this next one, the corner initially has outside leverage. But as the ball is snapped, Hopkins widens outside of this boundary of four yards under the numbers. Therefore, the corner adjusts to his inside hip pocket.

Sean Payton and Drew Brees understand this stuff. And they also understand that Brees ain’t hitting on those deep sideline fades between a defender with tight coverage and the sideline all too effectively at this point in his career.

So instead, they like to use this outside leverage against defenders when facing Cover 1.

Here’s an example against the Bucs Week 1:

This safety tries to mesh down on the slant, but it develops too quickly for him.

The only problem is the Rat/Robber player in the middle of the field looking to jump on crossers and slants. So, when that player is there, the Saints rely on quick-developing routes and mesh-type concepts to counter-act him and use their inside access in the short-to-intermediate levels of the field.

They can do this by utilizing Drive concepts, Hi-Lo-ing this Rat player in the MoF.

The Cardinals did a good job of calling up a Drive concept against this look last week:

The drag route pulls the Rat defender down, and the crosser is wide open because the deep safety is too far back.

Unfortunately for them, Kyler Murray overthrows it, and it’s picked.

The Saints ran a similar play, but with intersecting routes from opposite sides of the field, Sunday night.

The Rat defender circled goes with the underneath crosser by Deonte Harris, leaving Adam Trautman open on the dig route behind him for a first down.

But Brees doesn’t wait long enough to see Trautman break open, even though he had time in the pocket, and he checks it down for a two yard gain.

The opportunities should be there for the Saints to move the ball consistently against this Lions team. Their secondary has struggled to cover through three weeks, even against Mitch Trubisky, and they haven’t gotten pressure on anyone.

Even if Thomas doesn’t play, I’d expect that the attention Alvin Kamara will garner from how he’s been playing to force the Lions into doubling him out of the backfield on some occasions.

This should provide opportunities for guys like Emmanuel Sanders and Tre’Quan Smith to cook on some of the quick-developing, in-breaking routes, as well as crossers, versus one-on-one matchups.

And if the offensive line holds up, Brees has no excuses not to put up big numbers. He and the offense improved a bit last week from what they had been showing, but this week, they should take an even bigger step towards the elite offense they’re capable of being.