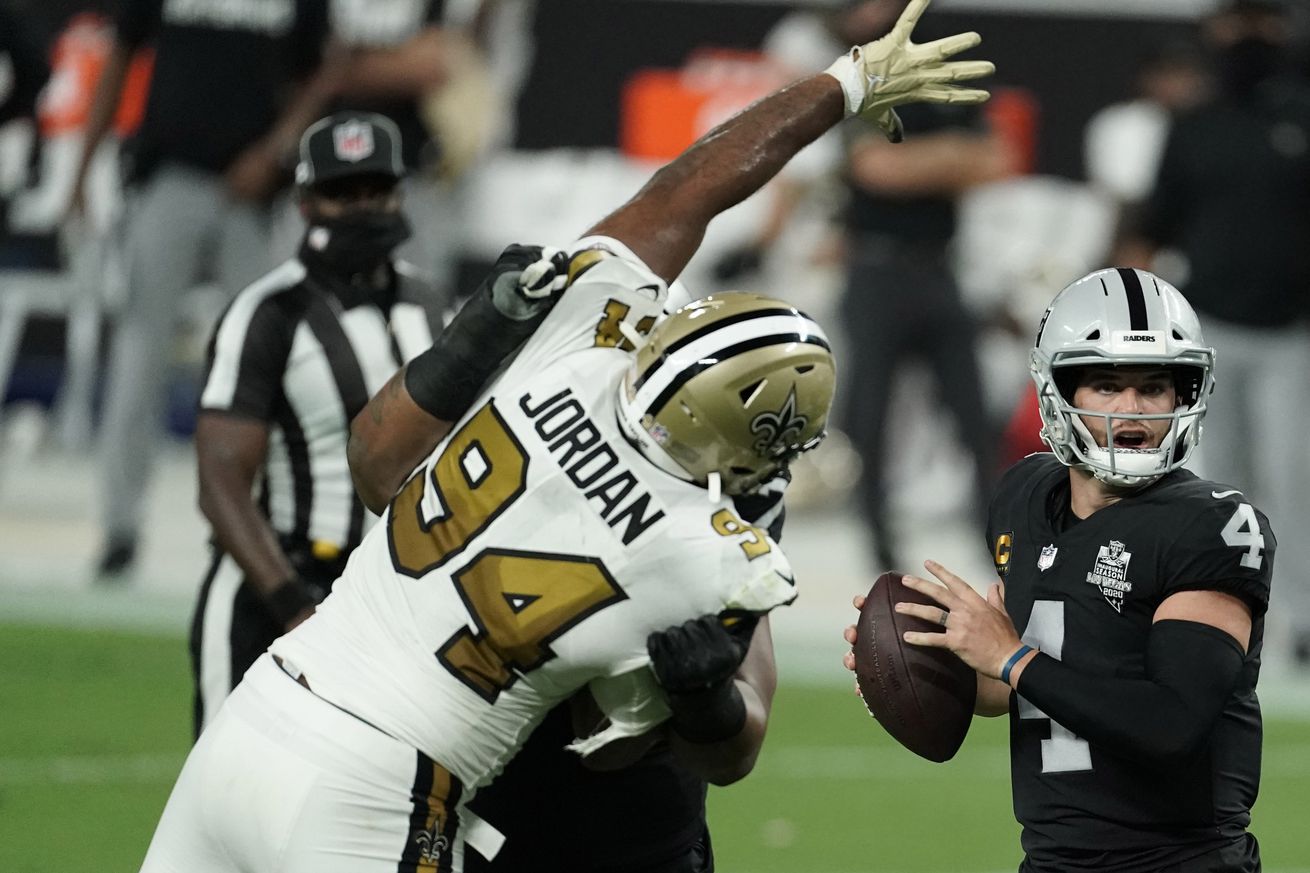 The Saints used a ton of lineups and configurations along the defensive line in Week Two. Let’s dig in to see which were most popular, effective, and more.

It was another busy day along the New Orleans Saints defensive line. Didn’t help that the Las Vegas Raiders held the ball for 76 offensive plays per ESPN. New Orleans had some success along the line in the first quarter coming up with three sacks in the first 15 minutes. Unfortunately though, no more sacks after that.

Before we dig in, you can go and review vocabulary, gap assignments, and defensive line techniques in last week’s piece.

One of the more remarkable things about Monday night’s gameplan in the trenches was the variety of looks they gave. Last week, we broke down configurations (based on position) and groupings (based on player personnel). This week, we also need to dig into the number of fronts they showed. While last week we saw a heavy share of three- and four-man fronts, New Orleans worked in four different fronts in this game.

Each of the Saints’ three sacks came from a different front. One each with three, four, and five down linemen. No batted passes this week and two instances in which linemen dropped back in coverage on fire blitzes.

New Orleans used 34 different configurations on the line this week, close to last week’s total of 31. But with the number of fronts, the personnel packages made it up to 31 from 21 last week. Unlike the Week One distribution though, the Saints showed 23 different looks in the first half, leaving only seven to be shown in the second half.

Cam Jordan at LE, David Onyemata at 3-tech, Malcom Brown at 1-tech, and Trey Hendrickson at RE was the most utilized four-man configuration. The same four players were most popularly used in terms of 4-man personnel as well, same as last week. Both the configuration (positional alignment) and grouping (player personnel) were seen seven times throughout the game

This configuration was seen four times in the first quarter, the first two plays of the third, and once more in the fourth. All downs were first or second down. All distances to go were 8+ yards.

On those seven plays this group allowed only nine total yards allowed including 10 yards rushing, four yards passing, and -5 for a sack. No first downs or TDs were allowed. This was an effective configuration, especially considering they were often seen for scripted plays at the beginning of the game and at the top of the second half.

The most popular configuration here lined up Cam Jordan at LE, David Onyemata at 3-tech, Malcom Brown at nose tackle, Margus Hunt at the other 3-tech spot, and Trey Hendrickson at RE.

Five of this group’s six snaps came on first down while the sixth was on a Las Vegas second and eight in their final drive. All considered run situations. The group allowed 37 total yards, 20 passing and 17 on the ground. No sacks for this specific group of five.

An earlier five-man configuration included Malcolm Roach in at NT instead of Malcom Brown. Much like the group configuration that saw more snaps, this group was deployed on obvious rushing downs but looked to be more utilized on short-distance downs specifically. Three of the group’s five snaps came on a third and fourth and one. Two of those three plays were converted for a first down.

This group allowed only seven total yards, nine receiving and two rushing before notching a -3 tackle for a loss on the third to final play before Las Vegas’ last field goal. Keep in context though, easy to allow only 1.4 yards per play when you’re mostly in on run situations, short yardage downs, and a four-minute offense dedicated to running the clock out.

New Orleans ran just five total plays with three down linemen, down from 11 last week. Using three different configurations and groupings.This front was usually accompanied by six defensive backs on the field. Despite having personnel out there to stop the pass, these defensive formations allowed 52 total yards which included 43 through the air and a -5-yard sack. The remaining 14 yards were picked up on a big run on second and 15. Here is the breakdown for each play and game situation. These were some important plays, for better or worse.

Cameron Jordan at LE, Sheldon Rankins at nose tackle, and Carl Granderson at RE
Q4 – 17-yard pass to Hunter Renfrow on third and 10 at the 50

The final defensive front that was run in this game was a six-man goal line front. We saw five-man fronts in this situation against the Bucs last week. This week, the Saints ran goal line looks three times in a row at the end of the first drive of the third quarter. Those three plays yielded a stop on a first down run, a fumbled snap exchange on second, and the one-yard receiving touchdown by Darren Waller off the fake. Waller did a good job selling the run by engaging Ceedy Duce (C.J. Gardner-Johnson) as a blocker first, forcing the safety to bite hard on the run. Waller than leaked out all on his lonesome to the boot-action side of the endzone.

Here is a breakdown of where each player was charted:

With 13:30 to go in the third quarter on a second and seven, the Saints lined up with a four-man front. Usually in these looks you’ll see both ends on the outside in a two or three-point stance, one interior defender lined up over the A-gap and the other lined up over the B-gap. For this play, New Orleans used both Sheldon Rankins and Margus Hunter in opposite B-gaps making them both 3-tech defenders on the play. This left the middle of the offensive formation wide open pre-snap. However, after the snap Hunt and Rankins ran a stunt where Rankins crashed inside to the strongside A-gap and Hunt made his way around to the B-gap originally occupied by Rankins.

Unfortunately for New Orleans, Las Vegas running back Josh Jacobs is a good pass protector. Without Jacobs, a blitzing Malcolm Jenkins would have had a clean shot up the middle to Derek Carr – potentially erasing the 10-yard catch by Darren Waller over the middle.

On the lone Raiders turnover in the fourth quarter, Sheldon Rankins and Margus Hunt were in again but this time they both lined up over the guard shading the inside shoulders threatening the A-gap. No funny business here though as Hunt and Rankins both attacked inside but got held up by the pulling blockers. Richard would go on to drop the ball here leading to a giveaway.

Lastly, Head Coach Sean Payton spoke about issues with spacing and details earlier this week. Often when we hear that, it’s a conversation around the offense. But there were examples on defense as well. Check out the play below where the Saints look to run a stunt allowing Hendrickson to bend around the formation and attack the B-gap opposite his alignment. Unfortunately, some detail work came up short here as there is a collision in the middle when both Sheldon Rankins and David Onyemata attack the same gap. The collision causes a slight hesitation by Hendrickson and the lack of pressure than leads to a 20-yard catch and run for wide receiver Bryan Edwards. Marshon Lattimore’s coverage wasn’t so stellar here either.

This is a play that shows multiple areas where the Saints were just plain off on Monday night and puts on display the detriment that comes with the errors. All things on the defensive side you’d like to see cleaned up ahead of Sunday Night’s matchup with the Green Bay Packers.