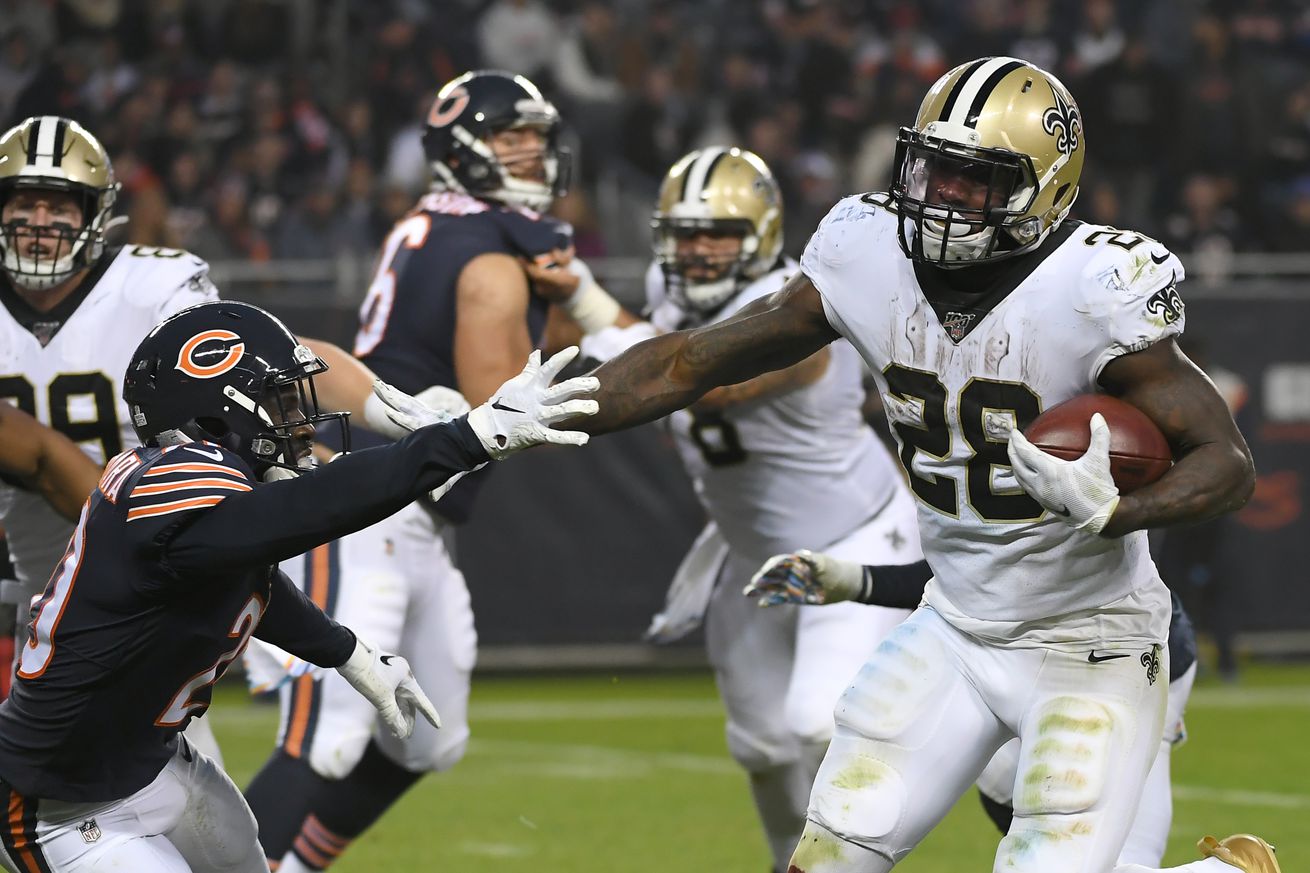 Questions as the New Orleans Saints look to grab their fourth-straight win at Chicago.

The New Orleans Saints have ripped off three-straight wins. After comeback performances against the Detroit Lions and Los Angeles Chargers, the Saints toppled the Carolina Panthers off the bye week. Now, they’ll head to the Windy City to take on the Chicago Bears. The story of the Chicago Bears this season thus far centers around defense and the quarterback. The same can actually be said of New Orleans, but the angles are different. Both of these teams have a lot of questions marks remaining for their winning records and here are five of ours ahead of the afternoon matchup.

Can the Saints secondary capitalize on a stagnant offense?

It’s funny, usually you would look at a matchup like this and think, “This is a great chance for the secondary to rebound.” However, despite how weak the Chicago offense has looked of late, there is still so much concern about the Saints’ pass coverage. Against the Atlanta Falcons, Nick Foles took over for Mitch Trubisky in the fourth quarter and totaled three passing touchdowns to mount a comeback victory. However, in the four games since, Foles has only thrown three more touchdowns while adding five interceptions. Many of the interceptions came on overthrows or targets outside the frame of the receiver. If New Orleans can be opportunistic and take advantage of Foles’ inaccuracy/aggressiveness, this could finally be a turnaround game for the defense.

How will the Saints produce on offense?

30 points per game (7th in the NFL), 384.5 total yards per game (11th), and 265.7 passing yards per game (9th); the Saints haven’t had much trouble moving the ball despite several injuries. Now, they’ll have to find a way to do it again. This time the offense will be without wide receivers Emmanuel Sanders (Covid/IR List), Michael Thomas (ankle/hamstring), and stand out UDFA rookie Marquez Callaway (ankle). That means that production will likely mostly be generated in the run game. Tre’Quan Smith, Deonte Harris and possibly practice squad players Juwan Johnson and Austin Carr will be charged with maintain the passing game. Smith is bringing in a career high 41.3 yards per game in his increased role. This Bears defense is allowing a 72.5% completion percentage over the middle of the field within the 20 yards of the line of scrimmage along with five touchdowns. It’s a clear weak area for their coverage unit. Brees is completing 80% of passes in the same area and the aforementioned Tre’Quan Smith has seen the majority of his production there as well – 13 of his 20 catches and 172 of his 248 receiving yards.

Will Jared Cook step up?

Cook and Brees started to get into rhythm in 2019 beginning around Week 9. From there until the end of the regular season the two connected for 28 catches, 537 yard, and seven touchdowns. So far, Cook has only compiled 14 catches for 198 yards. His three touchdowns are of course welcomed, but in a game without Michael Thomas, Emmanuel Sanders, and Marquez Callaway, Cook should get some love over the middle of the field as well. He has a great matchup this week with undersized off-ball linebackers manning the second level.

Can the Saints offensive line continue to impress?

So, I’m gonna start a #Saints OL Film thread here, but just wanna go ahead and say a couple of quick notes:

With or without Khalil Mack, who is currently listed as questionable for this weekend’s game, the Bears d-line can still be a nuisance. However, the Saints offensive line has been performing among the best in the league in both of ESPN’s offensive line metrics; Pass Block Win Rate and Run Block Win Rate. However in the countering metrics, Pass Rush Win Rate and Run Stop Win Rate, the Bears are surprisingly underwhelming.

By these metrics, the Saints should be able to maintain their outstanding play against Chicago’s trench defenders. The win rates only tell a fraction of the story, of course. Regardless of how low the percentages may be, there is no doubt that this is a threatening unit and the Saints protection needs to be on point in order for this offense to churn.

What is the best way to utilize Marcus Davenport?

Through 2 games, Marcus Davenport has earned an impressive 82.4 OVR grade in 2020. He has been strong both rushing the passer & in run defense.

He has been held to 44 snaps, but there’s no reason not to expect even more on-field progression when he’s back to his normal workload. pic.twitter.com/cZo9Z059v8

Since returning, Davenport has helped to open up the Saints pass rush and began immediately contributing in the run game. The unit piled on 31 total pressures against the Los Angeles Chargers per PFF and the first rounder contributed to two big plays to push the Panthers out of field goal range. One of the elements of Davenport’s game that is easy to appreciate is his endurance. The former UTSA Roadrunner tends to make plays deep in drives and deep in games. With the Saints’ incredibly consistent defensive line rotation, they keep their talent fresh while opposing offensive lines wear down. Over the last two games since Davenport made it back to the field, he has played only 21 and 23 snaps respectively. It brings to question quality vs. quantity. Does the rotation and selective snap count keep him fresh and therefore improve his production and efficiency? Or would unleashing him for the majority of defensive snaps actually end up benefiting the team allowing him to make more plays?