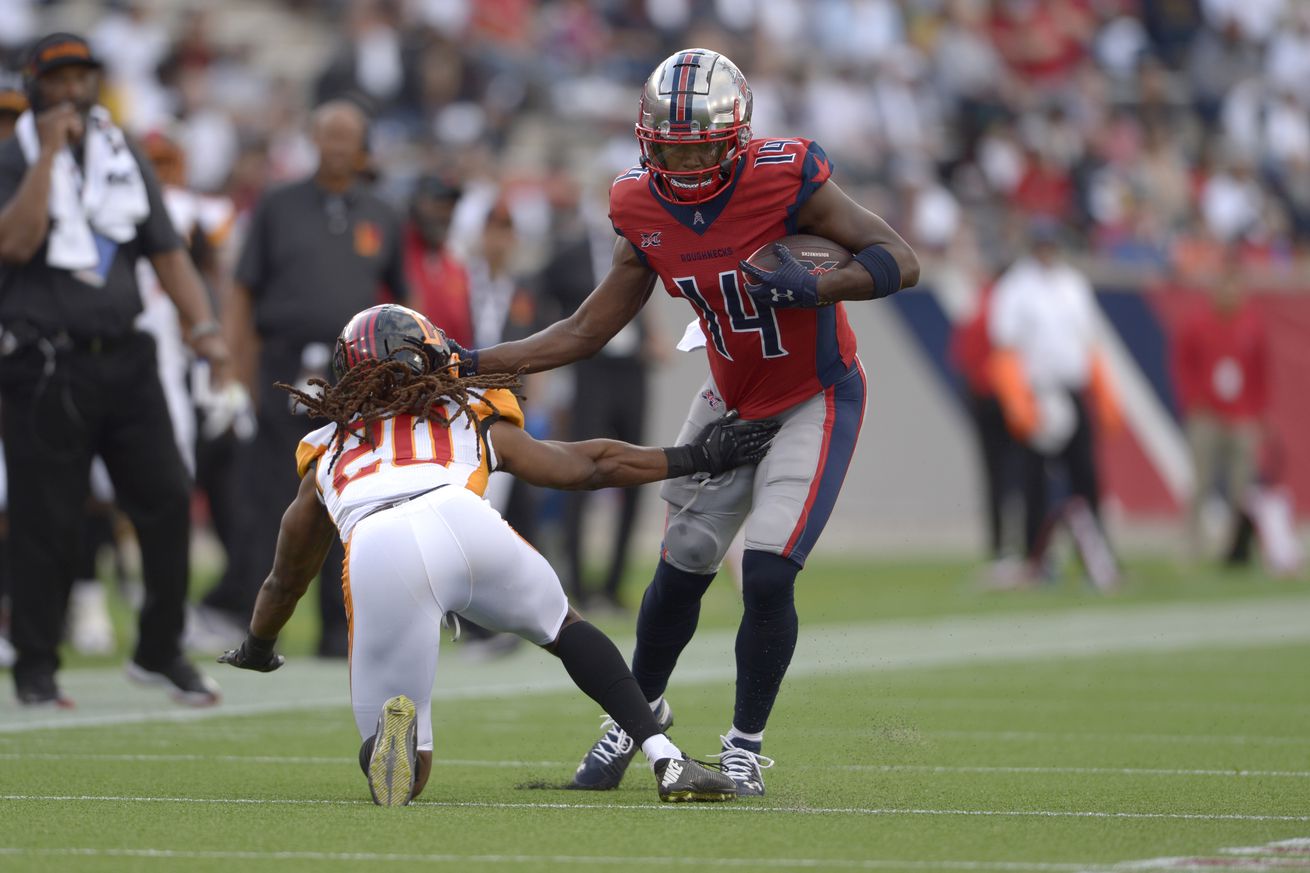 After signing Deatrick Nichols, there are several XFL players that warrant the Saints’ gaze.

Starting on March 23rd, XFL players became eligible to sign with NFL clubs after the league’s premature conclusion due to the Coronavirus pandemic. Now that these players are available to sign after the early phases of NFL free agency, many are looking for their shot at the next level.

The XFL to NFL pipeline is already open as former Houston Roughnecks QB P.J. Walker signed with the division rival Carolina Panthers, rejoining former Temple coach Matt Rhule. Walker was a popular name for Saints fans as well as fans of just about any NFL club as he was electrifying in his XFL stint as he threw for 1,338 yards and 15 touchdowns in his five games before the league came to an end.

Then, a few hours later, Roughnecks DB Deatrick Nichols was signed by the New Orleans Saints. Nichols was one of the best corners in the XFL. He lead the league with three interceptions and was consistently credited for his lockdown ability with another six passes defensed.

Even though the Roughnecks’ star QB and DB are off the market, there is still a star receiver from Houston that leads off our list of five more XFL players the Saints should evaluate.

PJ Walker to Cam Phillips for his 3rd touchdown of the day.

They’ve connected for 6 touchdowns the past couple of weeks. pic.twitter.com/93gUkXbLPE

Adding Emmanuel Sanders was a huge step forward for the New Orleans offense who could not field a second wideout to complement Michael Thomas yet again in 2019. The next receiver below Michael Thomas was Tedd Ginn Jr. who had not only 119 fewer receptions but 1,304 fewer receiving yards as well.

Phillips lead the XFL in receiving yards, receptions, and touchdowns reeling in an astounding nine in just five games. What’s more is in that handful of games, Phillips’ 455 receiving yards surpassed Ginn’s 421 over 16 contests. Usually I would tout versatility in a WR, but Phillips only took three snaps from the slot. However, I actually look at that as a positive. Phillips is a guy that can challenge the younger receivers lower on the roster for a static position on the outside while guys like Michael Thomas and Emmanuel Sanders move around.

It should be noted that there is a big difference between the XFL’s competition and the NFL’s. But the fact of the matter is Phillips dominated the XFL. Coming out of Virginia Tech he was never noted as a speedy receiver, clocking in with a 4.87 40-yard dash according his Player Profiler page. However, he was one of the best deep threats in the XFL while also displaying skilled route-running and use of leverage. Of course, all of that can stand to be further improved, but with the tools he has available NFL clubs should be willing to consider.

Now, I have written about Donald Parham before. I thought he was an excellent choice for the Saints in place of Dan Arnold in last year’s draft. He did not take off in the NFL as I had hoped but boy did he blow up in the XFL or what?

Parham went undrafted out of Stetson and had a cup of coffee in Detroit in DC before not playing in the NFL. He was drafted in the ninth round of the XFL’s draft and took off from there. The 6’8” lengthy tight end ranked third in the XFL in receiving yards with 307 on 24 receptions. He also tied for second-most touchdown receptions with four in his abbreviated season.

Here is a snippet of what I wrote about him back in March of 2019.

He checks all the boxes for a Saints late-round pick. He’s a developing player at a position in need of depth, has incredible size at 6’8″ 240 lbs., attends a small FCS school, and is likely to have insane measurables to accompany his impressive stats. The talented Stetson Hatter accumulated 180 catches, 2,591 yards (14.4 per), and 20 touchdowns through the air. That includes a stellar senior season of 85 catches, 1,319 yards, and a whopping 13 touchdowns over just 9 games where he averaged a ridiculous 146.6 yards per contest.

Parham’s impressive size and production both in college and the XFL are one thing. His testing at his local Pro Day only add to the hype as he registered a 36” vert and an 84” wingspan at last year’s senior bowl. his also displayed his impressive game speed for his size topping out at 21.1 MPH in the play above. Big fan of this guy and would love to see him in the NFL. The big downside in terms of the Saints interest would rest within his lack of blocking ability. But hey, they ran with Dan Arnold longer than warranted despite that.

Strengths: This man would stop a train if it was coming at our QB. The best guy in the league to have up front. A absolute key piece to our team!

Like Parham, Martez Ivey was another prospect I found myself looking for the Saints in the late rounds of the 2019 draft. The former Florida Gator is a versatile offensive lineman with the length to play both on the offensive end and interior comfortably.

Do not let the Viper’s 1-4 final record dissuade you, Tampa Bay actually had what was considered the league’s best offensive line. Ivey played left tackle for the unit which lead the way to a league-leading 828 rushing yards and 1,959 total yards. Individually he was credited by PFF as allowing only one sack off five total pressures during his 215 pass blocking snaps.

Ivey (6’5”, 312 lbs.) should get another look from an NFL club this offseason and the Saints could use a little more depth at tackle.

Quinton Flowers is TAKING OVER this game

For those that missed their opportunity to see P.J. Walker play in a Saints uniform, Quinton Flowers may be appealing. Listed on the Vipers’ roster as QB/RB, Flowers was basically played the Joker role in Tampa.

Flowers threw for 106 yards on eight completions, and also added 78 rushing yards and a touchdown. While those numbers are not eye-popping by any means, it is worth remember that the Saints may be turning over the QB responsibilities to Taysom Hill in the near future.

If they want another proven option QB to back him up later, Flowers could be a good and cheap option. He would also add value this season as a third RB.

Flower did not pop in the Tampa Bay Vipers system as a QB/RB hybrid the way that Taysom pops in the Saints’ Joke role. But one is an offensive system created by NFL mastermind Sean Payton, while the other… well, is not.

I am completely willing to admit that this is entirely a bias pick. Oakman hit internet stardom when a photo of him went viral for this shot on the AT&T Stadium screen.

He was a dominant force at Baylor in college piling on 17.5 sacks and a remarkable 46.5 tackles for a loss. In the XFL he only had one sack and seven total pressures, but was also coming off of a couple years away from football, only playing in one of the indoor leagues.

He was expected to be a first-round selection until he had a down 2015 at Baylor. Then fell completely out of favor when he faced alleged rape trial. He was eventually found not guilty by a jury that saw insufficient evidence for the claim and instead found evidence for consent. Unfortunately, being tied up in that legal process completely derailed what looked like a promising football career. Since then, he has worked hard to earn his way back and I think if any culture could give him the opportunity to show himself in the best light, it is the one in New Orleans.