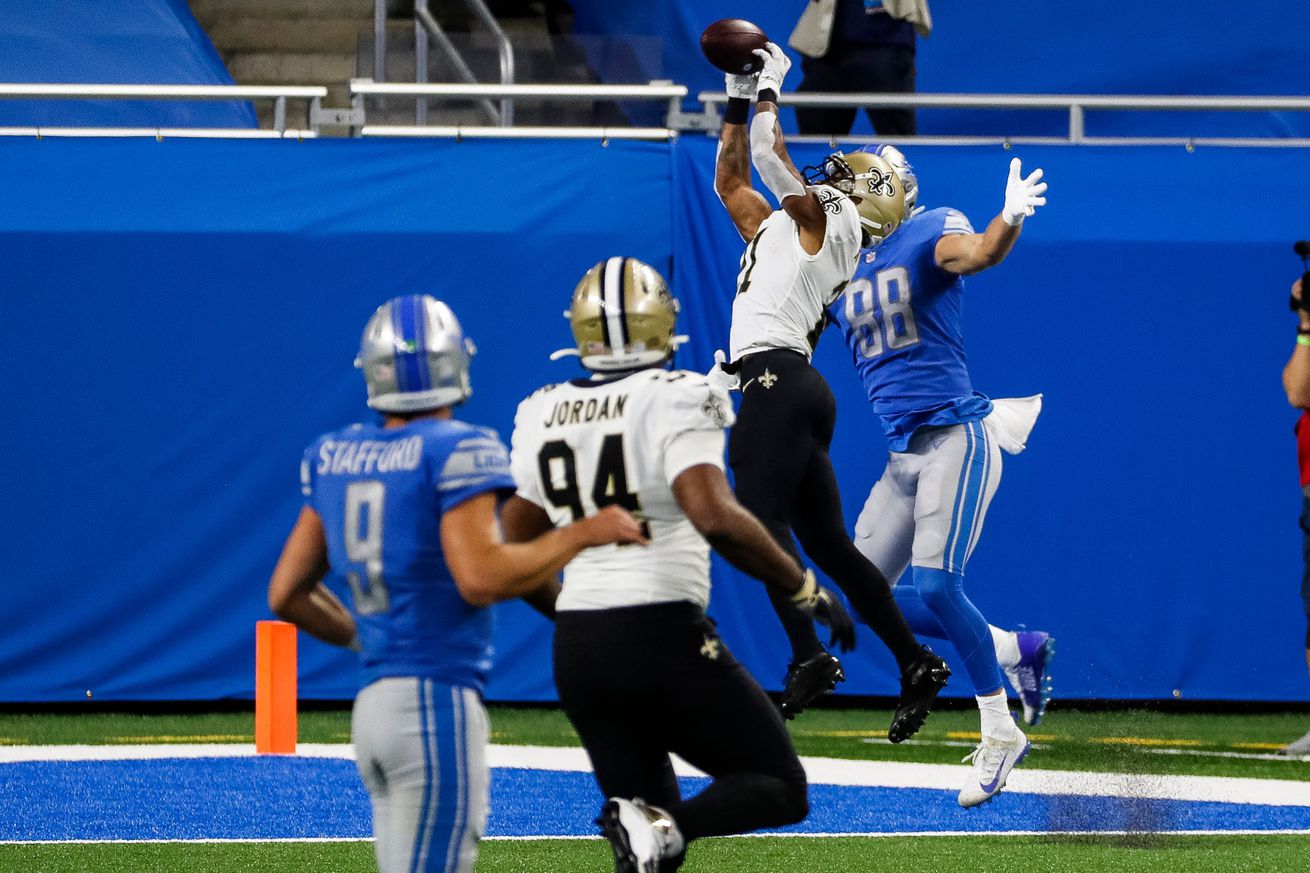 Last Sunday’s matchup versus Matthew Stafford and the Detroit Lions was always going to be a tough one, one that was made even tougher with the absence of the New Orleans Saints’ top two cornerbacks, Marshon Lattimore and Janoris Jenkins. This meant the Saints needed their secondary depth to shine through, and they were rewarded with one of Patrick Robinson’s best games since he returned to the Saints.

The first big play we can look at from Robinson was, of course, the interception. Halfway through the second quarter in a tie game with Detroit driving, Robinson’s tasked with one-on-one coverage with the Lions’ big tight end T.J. Hockenson. Robinson plays him closely until Stafford attempts to loft his pass over the Saints’ corner, when Robinson snags it out of the air for the takeaway.

Robinson was beaten badly only once during Sunday’s contest, on a play where he was playing deep in a Cover 3 look and Stafford found wide receiver Kenny Golladay between two levels of zone coverage, and even on this play Robinson does well to get to Golladay right as he’s bringing the ball in and limit any potential yards after the catch.

The secondary however was far from perfect on Sunday, and it showed early with this 50-yard catch and run by Danny Amendola after a coverage miscommunication by Marcus Williams and linebacker Alex Anzalone.

Before this week, the biggest thing plaguing the Saints secondary was the penalties, as noted during last week’s film study. Against the Lions, the Saints were called for two defensive pass interference penalties, with Marcus Williams and Alex Anzalone each picking up one each, and both were on admittedly soft calls. It’s easy to think the team is being watched a little too closely by the refs, but that’s what happens when you get a reputation for a team that likes to play physical. It’s a vicious cycle the Saints will have to try to break while also risking giving up the physical play that has made this secondary successful over the past few seasons.

With the struggles that Marshon Lattimore has faced this season, having depth in the secondary in case he is really struggling has become even more of a priority than in years past. That’s why games like what we saw versus Detroit are that much more important, they’re proof that the secondary can succeed and pick up the slack without Lattimore (and without Janoris Jenkins as well).