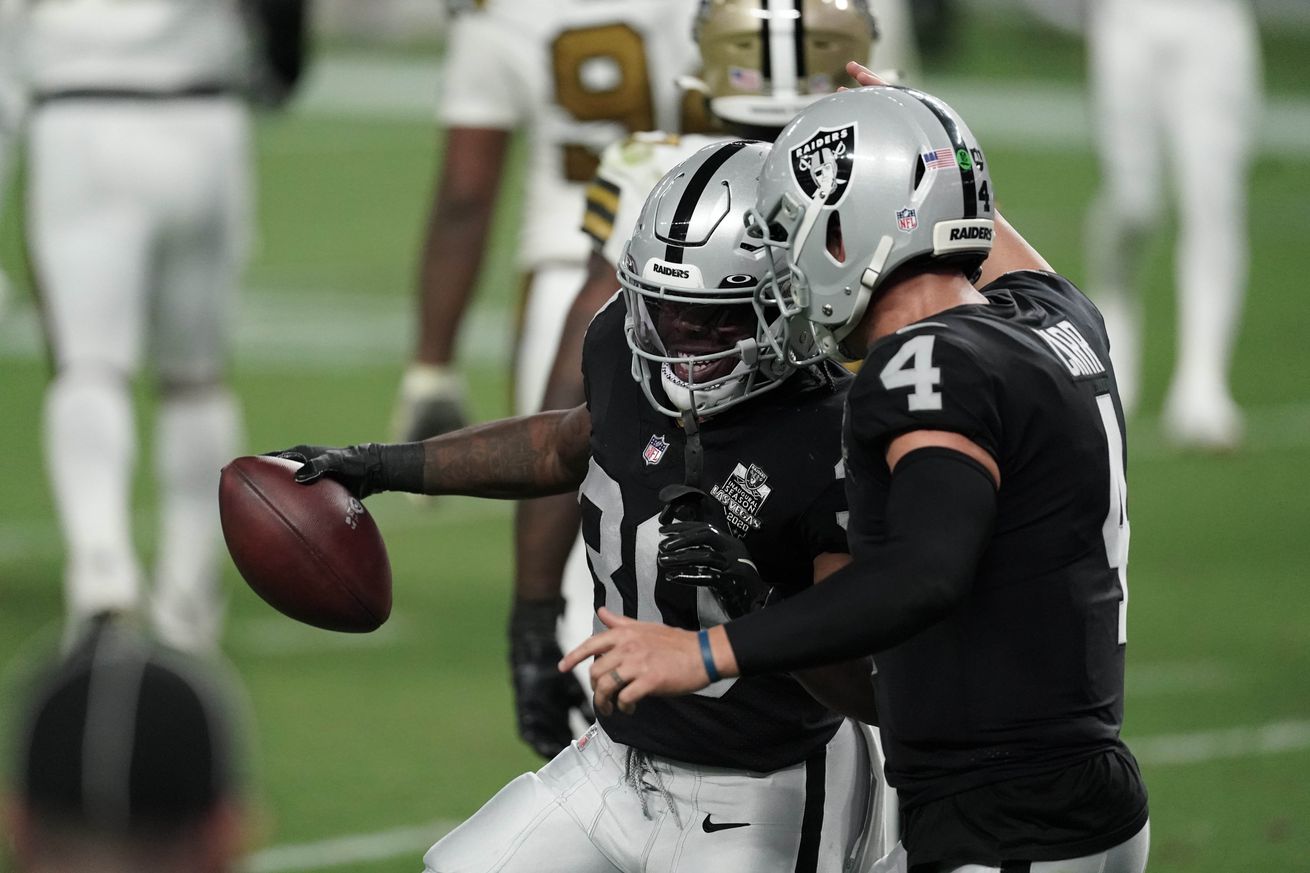 Drew Brees didn’t have his best game, but it’s hard to find rhythm when you can’t find the field

There is a lot of blame to go around for the New Orleans Saints Monday Night Football loss to the Las Vegas Raiders, a loss that has served as a wake-up call to many Saints fans as well as an undoubtedly humbling experience to the team. But one stat stands above the rest in the 34-24 upset defeat: Time of possession.

The Raiders held the ball for nearly 13 minutes more than the Saints — a total of 36:18 — thanks in large part to the defense’s total ineptitude to stop the Raiders on third down in crucial situations.

As with any stat, context matters. The Raiders converted 10 of their 17 third down attempts, in addition to another two fourth down conversions on two attempts. New Orleans simply couldn’t get off the field after a strong start defensively.

The first example of this came early in the second quarter on a 3rd and 1, after the Saints went up 10-0.

Sometimes, a play comes along that — in conjunction with your defensive call — is unguardable. The Raiders here stagger their offensive line so that Jason Witten is lined up in a tackle slot, with Darren Waller coming in motion to complement him. The Saints rush eight, and amidst the chaos of the play action Witten leaks out. He catches the ball just beyond the sticks for an easy first down. Not much you can do, just good play design mixed with the defense guessing wrong.

This play, on the other hand, is New Orleans letting themselves get put in a bad situation. Derek Carr brings Waller — easily the Raiders best third-down weapon — in motion on 3rd and 3. Waller lines up in the fullback slot, with Marshon Lattimore getting shielded by the Raiders’ front. The Raiders have two routes being run in Lattimore’s face, allowing Carr to get Waller the ball quickly. Waller beats Lattimore to the edge for an easy first down to continue the drive.

To combat this, the Saints really needed to check once Lattimore was cut off. His angle to the edge was completely decimated, and for that the Raiders got rewarded with a first down. The Saints need to help with those vulnerabilities, as it wasn’t the only time they put themselves in poor position on critical plays.

There’s no way around, this is just Janoris Jenkins losing the sticks. On 3rd and 5, again Carr brings Nelson Agholor into motion. The Raiders run what looks like a levels concept, but instead Agholor digs his foot into the ground and runs a zag route. Jenkins gets caught flat footed in the secondary, and then he gets beat by an extra move from Agholor, who is then off to the races.

The tie between these two plays? Motion. The Saints get caught in man-to-man coverage, but it’s abundantly clear they weren’t ready for the concepts the Raiders were throwing their way. The Raiders also adjusted. After some quick punts on their first two drives, they realized that they needed to get the ball out of Carr’s hands quickly. The result was these three plays.

Of all of the conversions the Saints allowed on Monday, this is by far the most demoralizing. Not only is Waller not the primary option on this 3rd and 5, he’s not even supposed to be an option. You can see Carr look to his first, second and third progressions before finding Waller in the flat, quite literally just standing there while Cameron Jordan, who is inexplicably taken out of the pass rush and playing zone coverage, just watches him behind the line of scrimmage.

You have to know your personnel! It’s third down. Jordan has to be turned loose. He’s not doing any good covering nothing on this play, because he isn’t a coverage linebacker. On top of that, if you’re going to check any one player on this play, it HAS to be Waller. He’s the most talented player on the Raider offense, and he’s been killing you all night. This play is just a cornucopia of bad, and it is mind-boggling to imagine what the Saints were thinking to allow it to happen at all.

The reality is, it wasn’t Waller’s fourth down TD reception against a house blitz that beat the Saints, nor was it Jalen Richard’s 20-yard touchdown run on third down. It was a slow bleed of third down conversions, with seemingly each one having a different cause. Lattimore and Jenkins both had pass interference calls on third downs, with Jenkins’ penalty ultimately proving to be the dagger that put the Raiders in a position to score in the fourth quarter.

Indeed, the most disheartening thing about the Saints’ MNF performance against the Raiders was that each time they were beat in different ways. Witten’s conversion felt inevitable, but both of Waller’s and Agholor’s could have been stopped if the players were put in proper position or utilized properly.

This is not going to be an easy fix, but the Saints had better figure it out soon. With the Saints going up against Aaron Rodgers and the Packers on a short week, these mishaps will only be more severely punished.

The Saints’ defense has recovered from worse than this, and who knows, if they can clean up the penalties perhaps we’ll look at this Week 2 loss as an anomaly rather than a harbinger of doom for the 2020 season. But it isn’t going to be easy, and it’s going to take a lot of discipline. They have the players, now they just need to make the adjustments.