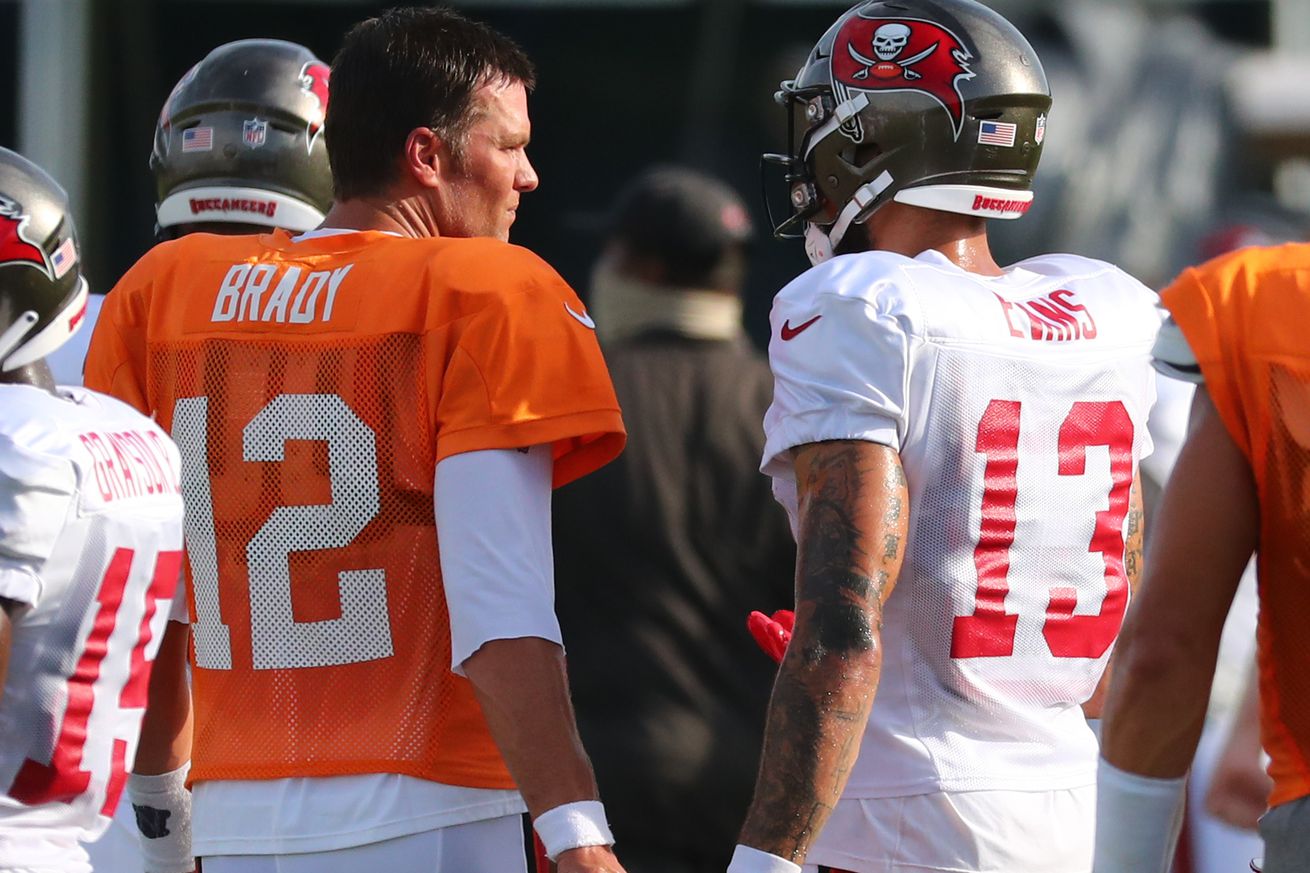 How will the Brady-led Bucs look in Week One? Who knows!

When Sunday’s matchup between the New Orleans Saints and Tampa Bay Buccaneers gets the spotlight as FOX’s Game of the Week, it will be primarily because of the man taking snaps on the visitor’s sideline.

Anyways, that man’s lining up at quarterback for the Tampa Bay Buccaneers, starting for a team that’s not the New England Patriots for the first time in his pro career, and starting for a coach that’s not Bill Belichick for the first time in his pro career. So, what’s there to expect from this? Who knows. We have no idea how well the 43-year old Brady will take to a new system for the first time in his career. We have no idea how much Tampa Bay Head Coach Bruce Arians will alter his system to fit Brady’s strengths. Hell, after 2019 we don’t even know what Brady’s strengths are anymore. However, we can look at a certain someone that will also be suited up for the game this Sunday.

Jameis had spent the first five years of his pro career as the quarterback of the Tampa Bay Buccaneers. He’d played 72 games for them, thrown for nearly 20,000 yards along with 121 touchdowns and 88 interceptions. This is a familiar matchup for him, as he’s played the Saints nine times in his NFL career. However, this time he’ll be suiting up for the boys in black and gold as the Saints’ third-string quarterback.

Brady will not be expected to do the same things that Winston during his time in Tampa (like, for instance, throwing 30 interceptions in a single season). The biggest change that is expected to come with this quarterback switch is less of reliance on deep passing. In 2019, Winston threw deep (20+ yards) on 15.8% of his passes, good for 4th most in the NFL. For comparison, Brady threw deep on just 10.1% of passes, 27th in the NFL (Brees was at 8.2%, lower than any QB not named Jimmy Garoppolo).

It remains to be seen if that’s the result of Brady not having a competent deep threat at wide receiver for the Patriots last year, whose top receivers included a 34-year old Julian Edelman, Phillip Dorsett and half a season of Mohamed Sanu. That will change this year, as Brady gets to line up with arguably the best WR duo in the NFL in Mike Evans and Chris Godwin, which leads into a fun matchup to watch for this game.

So, highlighed below are some of the key matchups to watch in the Bucs’ passing game.

It’s no secret that in past years, Evans has struggled against the Saints. In the Bucs’ last trip to the Superdome in 2019, Mike Evans ended the day with just 2 targets. He dropped one and PJ Williams broke up the other. Evans did not have a good day. He redeemed himself slightly in the rematch in Tampa later in the year, to the tune of 4 catches for 69 yards, but the Bucs were intercepted twice when targeting him. We’d also be remiss if we didn’t mention that Lattimore missed this game with an injury, and thus Evans was primarily matched on PJ Williams. Of course, this is all for naught if Evans doesn’t play on Sunday, after he missed practice Wednesday and it was reported that he’s dealing with a soft tissue injury and is listed as day-to-day.

Bruce Arians will only classify Mike Evans’ injury as “soft tissue,” but he has missed practice and will be “day to day” as Bucs prepare for Sunday’s opener at New Orleans.

With Mike Evans likely covered by Lattimore, that leaves the rest of the Saints defense to deal with Chris Godwin. While it would be expected for Godwin to lineup against Saints’ number two cornerback Janoris Jenkins, Godwin was a receiver that played 63.4% of his snaps out of the slot rather than lined up outside. Now, with Breshad Perriman gone it’s entirely possible we see Godwin bumped back outside with Scotty Miller taking slot responsibilities in 3WR sets, so Godwin’s matchup will largely depend on where he lines up. On the outside, he can expect to face new-ish Saints cover man Janoris Jenkins, who played the final three games of 2019 with the Saints after being waived by the New York Giants. In the slot, he can expect to face Saints’ sixth-year corner PJ Williams. For the Saints’ sake, let’s hope Godwin lines up outside, as Godwin beat Williams for four catches, 59 yards and four first downs on the four targets he saw against Williams in their Week 5 matchup last year.

Cameron Jordan has established himself as one of the premier defensive ends in the NFL over the past few years, and the thing that’s gotten him the most recognition is his proficiency in the pass rush. With the release of the Saints depth chart, Jordan is listed as the left defensive end, meaning we’ll likely be seeing him matchup with Buccaneers’ rookie offensive tackle Tristian Wirfs, who is listed on the Buccaneers’ website as their starting right tackle and will be playing his first ever professional game up against one of the premier pass rushers in the NFL.

Wirfs was the Buccaneers’ first round draft pick in 2020, coming off a stellar junior year for the Iowa Hawkeyes, where he gave up just 7 pressures and sacks in 461 pass blocking snaps, a majority of those at right tackle, where he’ll be lining up Sunday. One of the keys for Tampa Bay to succeed in the passing game will be to hope Wirfs doesn’t have much of a learning curve, because if the rookie struggles (without a preseason I might add) in his first start, it could mean Cameron Jordan personally welcoming Tom Brady into the NFC South.

Opposite them will be the matchup of Marcus Davenport vs Donovan Smith, taking place on Brady’s blindside. Saints fans were hoping that the team would’ve been able to pull off the signing of Jadaveon Clowney to rotate with Davenport and Jordan, but the third-year UTSA product is still stellar in his own right. Davenport had a breakout sophomore year interrupted by a foot injury last season, but not before terrorizing the Bucs in their Week 5 matchup with 7 pressures, 4 hurries and a pair of sacks on his now-teammate Jameis Winston. Meanwhile, he’ll be going up against a stalwart of the Bucs o-line, Donovan Smith. Smith’s played 1,000+ snaps at left tackle in each of his five seasons as an NFL player, all with Tampa Bay, and he’s showed steady improvement each season. Not a worldbeater by any means, but he stifled Davenport in Week 11 last season and is more than capable of doing it again.

Lastly, there has to be mention of the Buccaneers’ new tight end, Rob Gronkowski. He’s followed Brady to Tampa Bay in an effort to win another ring with his longtime quarterback, and if he’s playing like his usual self than the Saints will likely have issues with the former WWE 24/7 Champion. That’s a big if, however, because Gronkowski didn’t play in 2019 and had a decline in 2018 which led to his then-retirement. He’s a big, familiar target for Brady and could cause problems, with the Saints’ pass defense already having their hands full with Godwin and Evans.