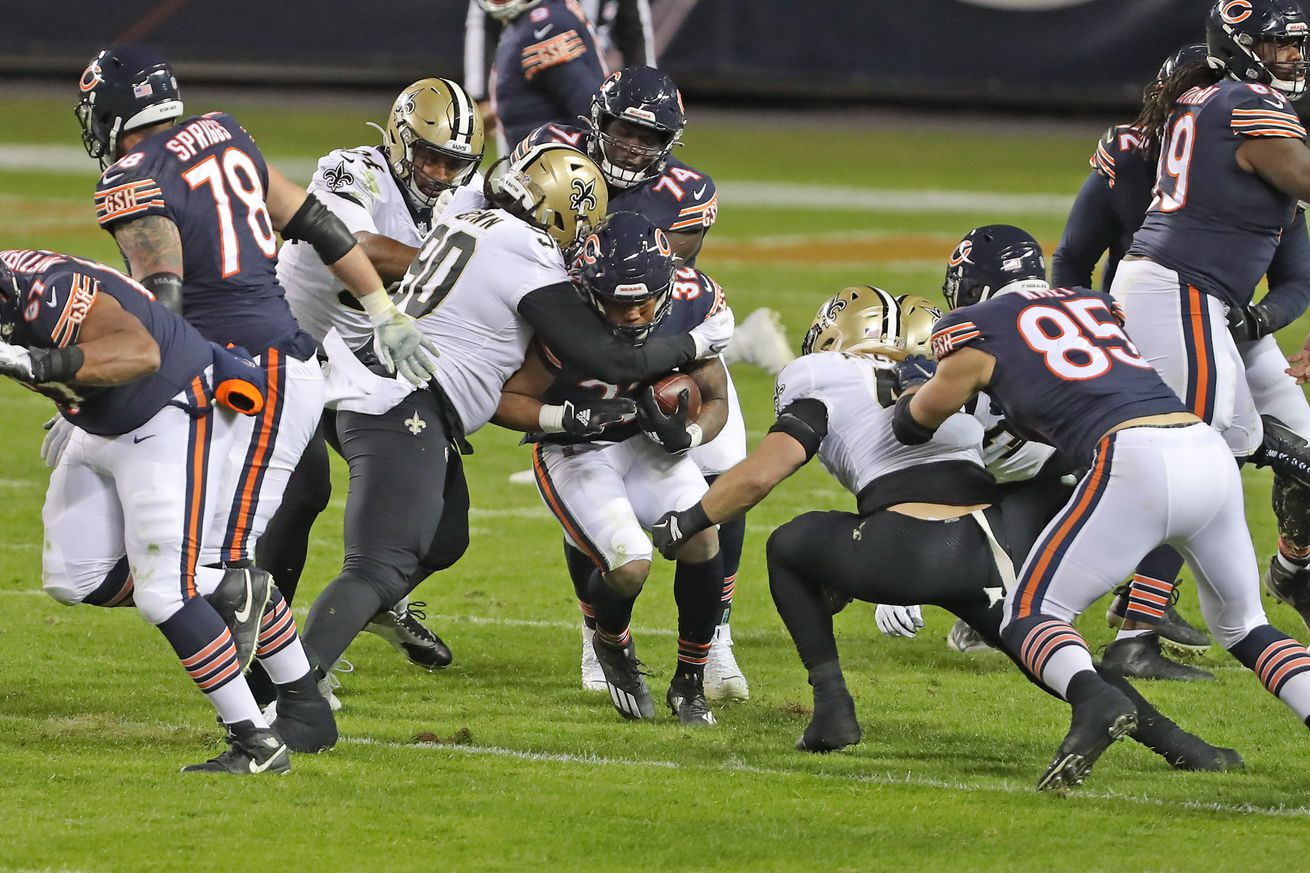 The New Orleans Saints’ streak of not allowing a 100-yard rusher was in a perilous position on Sunday. After allowing a 38-yard run in the second quarter to Chicago Bears running back David Montgomery on Sunday, it appeared that the Iowa State product would be the one to finally snap the 50+ game streak that the Saints have amassed over the past three seasons. However with the Bears deciding their best course of action was to let Nick Foles throw the ball 40 times, Montgomery finished with 89 yards, the most the Saints have given up to a single rusher so far in 2020 (just ahead of Josh Jacobs’s 88 yards).

It’s plays like this that make me preach at the alter of pre-snap motion. Even though there is there is no plan in place for Cordarrelle Patterson to get this ball as he crosses in the backfield, just the fact that he’s moving is enough to draw Chauncey C.J. Ceedy Duce Gardner-Johnson out of position and leave David Montgomery one on one with Demario Davis. Normally, that’s a matchup that the Saints win more often than not, but with the pre-snap motion drawing Davis more to the right side of the field, Montgomery running to the left just needs a good burst of acceleration to get past the Saints’ All-Pro linebacker and end up with 38 yards on the run.

What’s normally a very sure-tackling Saints team was anything but on Sunday, as David Montgomery himself forced 8 missed tackles from the Saints defense. It’s what allowed plays like this, where what should be a run for no gain at best turns into a run for nine yards and a 2nd and 1 instead of a 2nd and 10.

That being said, it wasn’t all doom and gloom from the Saints run defense. What was normally their biggest struggle this season, runs to the outside, was a problem that the Saints were able to contain. The Bears ran off of either edge six times on Sunday for a total of 16 yards, just under 3.0 yards per carry. Aside from the 38-yard run from Montgomery, the Saints were able to contain (an admittedly dire) Bears rushing attack to 2.5 yards per carry.

Plays like this are a good example of how the Saints were able to do that. With Marcus Davenport continuing to force Montgomery outside on this run, he buys enough time for CCJCDGJ to get around his blockers and stop Montgomery behind the line of scrimmage. The Saints run defense has already been the best part of this team at the halfway point in the season, however being able to contain these outside runs like they were able to do to here is how they’ll turn this run defense from very good to elite.