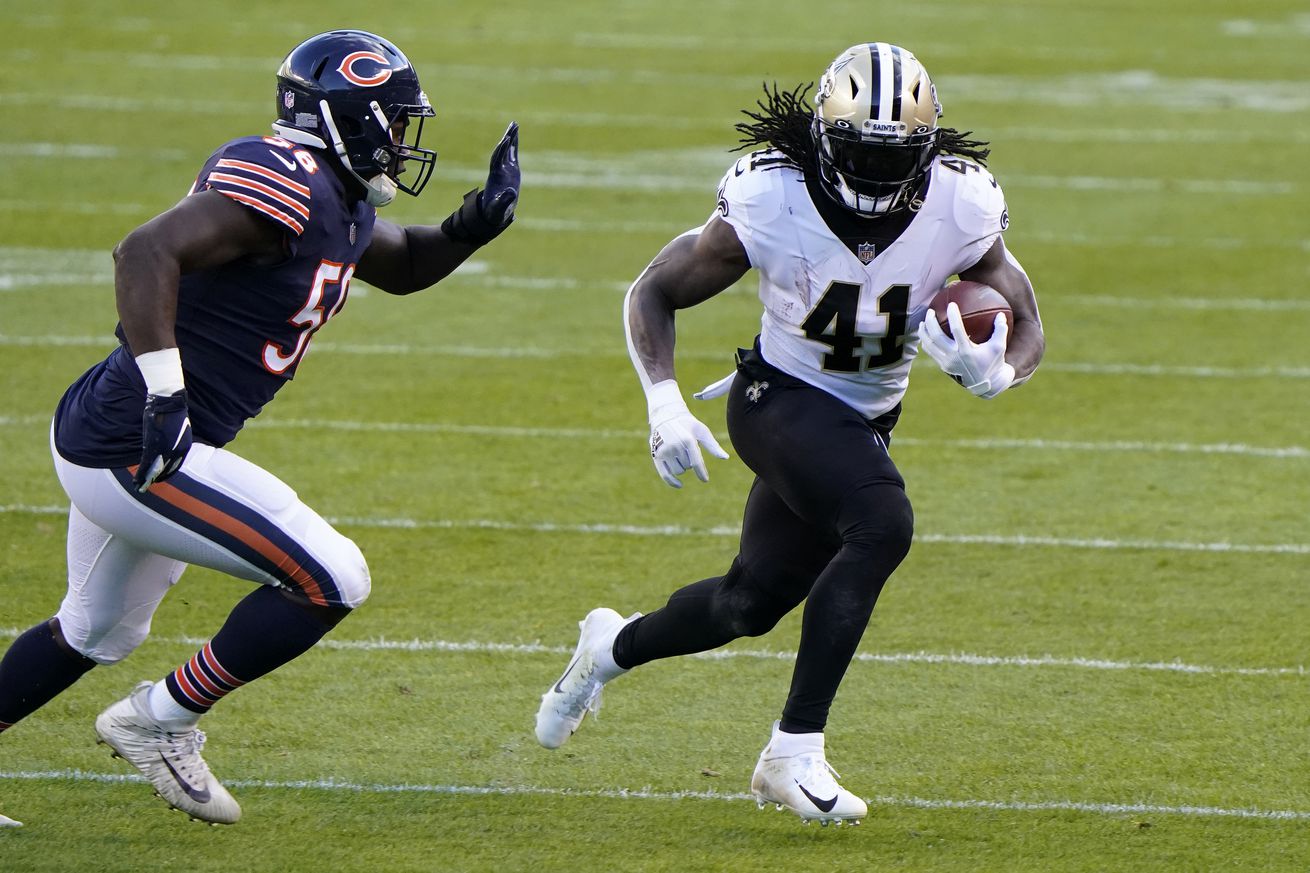 Alvin Kamara catches a lot of passes. But how many of them are screens? How many are check downs? And how many are plays where he’s the primary target? Let’s see.

And when he catches them, he generally does good stuff with the ball.

The fourth-year superstar out of Tennessee University is leading all running backs in receiving yards by more than double the next-highest receiver — He has 556 yards, compared to Mike Davis, who is second with 244. he’s even 15th among all receivers of any position.

Even more impressive is the fact that 522 of those 556 yards are after the catch.

His average depth targeted is 0.92 yards, and he’s averaging 10.1 yards per catch. So, basically everything is after the catch. Yet he’s still tied for first in yards per catch among running backs with at least 20 targets.

He’s avoided 14 tackles after the catch, which is the second-most among RBs.

Last but not least on the extensive list of AK’s eye-popping receiving stats this season are his 55 catches, which puts him on pace to have the most ever in a season by a RB.

Saints RB Alvin Kamara has 55 catches through seven games, more than any RB in NFL history through the first seven games of a season, per @EliasSports.

He’s on pace for 126 catches & 1,271 receiving yards, both of which would be single season records for a RB. Absolute machine.

But how is he getting these touches?

Most seem to think it’s just Brees being uber-conservative and checking it down too much, but a fair share of them are actually schemed up.

To get a better look at how the lethal weapon that is Kamara gets his catches, I broke down every one of his targets from Sunday’s game against the Chicago Bears.

I put each of his 13 targets into one of three categories — Screen, Check-down, or “one of primary progressions.”

The last one can be a bit murky sometimes, because you don’t always know if an option route run by him is the primary progression. Maybe it wasn’t to start the play, but Brees sees something pre-snap that makes him the primary option by default.

Here’s what I found:

I put the example above to indicate how sometimes the broadcast view of a game can be deceiving when trying decipher what’s going on in the passing game.

On broadcast, this looks like a check-down on 3rd-and-4 late in the fourth quarter. But if you take a closer look, you can see this is basically a schemed-up screen pass.

Juwan Johnson (#83 — furthest WR to the left) is trying to pick the linebacker picking up Kamara in man coverage, and Payton tries to get AK open by swinging him opposite of Brees to the left after the snap.

Unfortunately for New Orleans, a very heads up play by Danny Trevathan, who looks like he might’ve been blitzing on this play, prevents it from going anywhere. Trevathan senses Kamara sneaking off into the flats before he engages with Peat, and peels off for a fantastic play.

If he doesn’t, AK probably could’ve out-run Roquan Smith for a first down, if not more.

The biggest gain came on a tunnel screen when he was lined up out wide.

Kamara had a tough time on check-downs Sunday. He caught one of his four targets for eight yards, and dropped two.

One incompletion was one of those plays where Brees is under duress and he smartly throws it at his check-down option’s feet, but the other two were just blatant drops where Kamara is trying to run before he has the ball in his hands.

The play illustrated above is a good example of Kamara technically being a check-down, but probably being higher on the progression list in Brees’s mind. There are 23 seconds left in the half, and they’re running four verticals.

Brees probably has room to hit Jared Cook on a back-shoulder on the seam route, as the one-high safety is near the opposite hash. But he doesn’t want to take the risk and checks it down for eight yards.

It’s hard to get mad about it, considering a few plays later he hits Cook for a touchdown pass, but this is one of those plays where Brees probably takes the risk earlier in his career.

His conservativeness, combined with the fact that Kamara is amazing, results in more plays like this though. And that’s okay.

One of primary progressions — 5 of 13 targets

These are the Kamara plays that get me excited. It’s a combination of Sean Payton being creative enough to get him favorable matchups, Brees being accurate and last but not least, Kamara being absolutely special before and after the catch.

The play above is a Saints classic — A Stick concept to the strong side and a weakside option route by AK. The Bears are either in Man or some kind of zone match, but it’s apparent they were trying to double Kamara out of the backfield.

You can see the safety Eddie Jackson creeping down with an eye on him, and Khalil Mack drops back into coverage. The only problem for them is no one cuts off his inside leverage. They both take the outside.

So, as any good receiver would do on an option route, Kamara runs the slant option. And it goes for 47 yards.

On these five schemed-up targets, Kamara caught four of them for 79 yards.

All four of the completions were on option routes — two out of the backfield (52 yards) and two from the slot (27 yards).

His lone incompletion on these plays came on a wheel route out of the slot where the ball just died on Brees. It could’ve been the wind, but the look was there against man coverage, and it was nowhere close.

So it’s safe to say Kamara’s most successful plays from Sunday came on option routes where he was a primary option in the progression, as opposed to screens and check-downs.

Now, you have to keep in mind that check-downs aren’t supposed to be successful plays. Kamara is just an anomaly in the sense that he can turn those last-resort plays into big ones sometimes.

But the screen numbers from this game were a bit concerning. They gained negative yardage on his three screen targets out of the backfield, when typically this is a great screen team.

The majority of his targets were on more receiver-like routes, as they should be. And they were wildly successful.

So, will we see a higher number of these types of targets next week vs. a stout Tampa Bay defense? I guess we’ll wait and see. But I certainly wouldn’t be opposed.