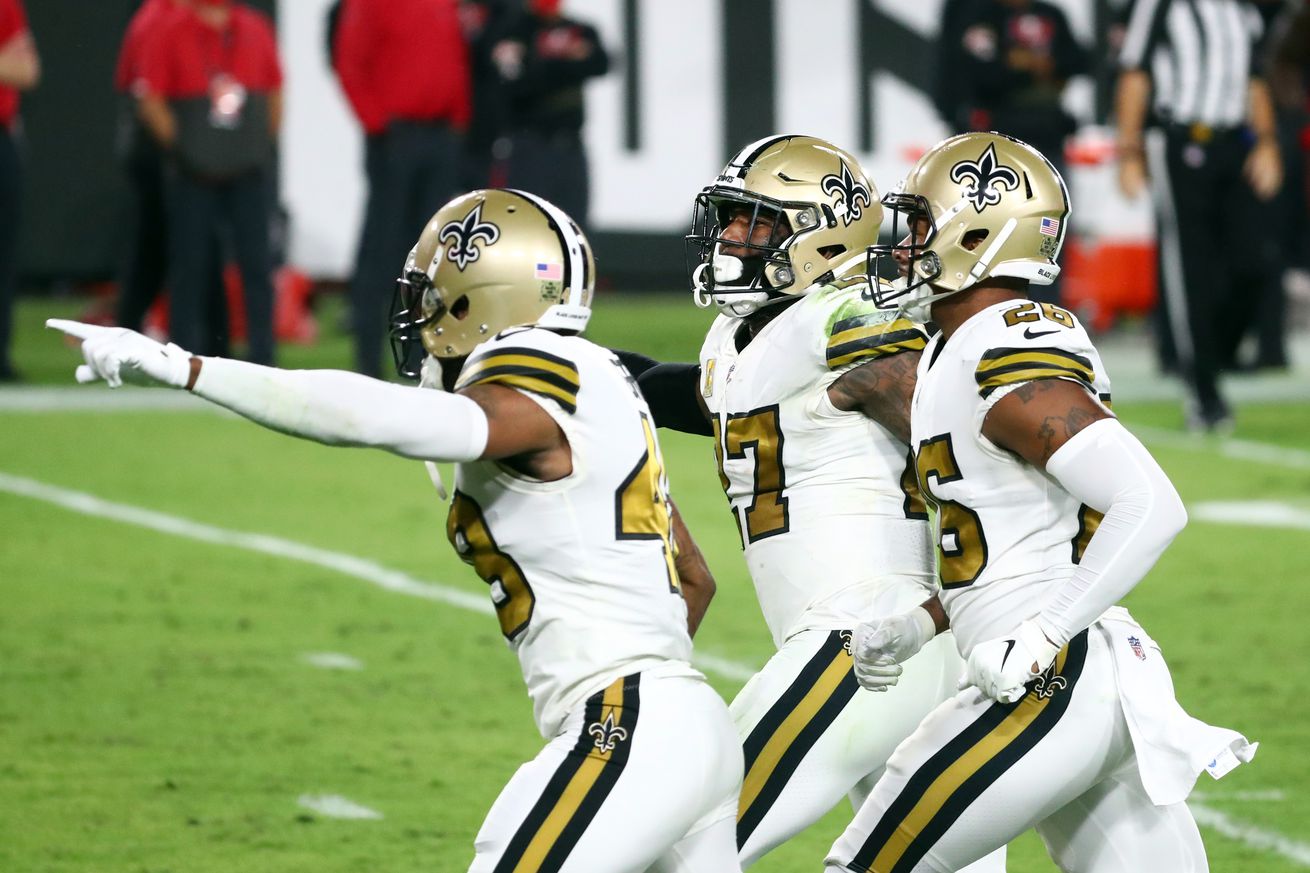 For the Buccaneers, just picking up 10 yards was a challenge on Sunday

The Saints absolutely walloped the Buccaneers on Sunday night, a 38-3 rout that was so thorough it has people wondering if the Bucs were frauds all along. Tom Brady looked completely off, Marshon Lattimore continued to punish Mike Evans, and the Saints defensive line is continuing to improve.

All of that created a perfect storm early on Sunday that the Buccaneers were never ever to recover from. The offense was utterly manhandled, and while those watching waited for them to pull it together, they never did. The Saints defense, meanwhile, continued to ravage Tampa’s allegedly vaunted talent.

So, how do you find yourself over 20 minutes into a game without a first down? The Buccaneers are probably wondering the same thing. With that in mind, let’s take a look at their early possessions and try to figure out what happened on Sunday.

Cameron Jordan has been quiet on the stat sheet this season, but you can never underestimate he impact of No. 94 when he’s on the field. The rookie Tristan Wirfs gets, well, rooked on a bull rush, and Jordan ends up in Brady’s face. Brady forces the ball to Godwin, who is well-covered by Chauncey Gardner-Johnson, and the Bucs end up in second and long.

This play could have gone a LOT worse for the Saints. It’s a simple little trap play where Wirfs come down, mixed with a rare mistake from Jordan. Jordan ducks too far inside, leaving the right side of the field wide open after a pancake on David Onyemata (not to mention a subsequent one on Malcolm Brown). Lucky for the Saints, Malcolm Jenkins comes up to make the stop after seven yards, limiting the damage.

3rd and 3: Incomplete to Rob Gronkowski

This is another big play for Jenkins. He plays Gronkowski physically at the line of scrimmage, and doesn’t give him a clear release on the break for the out route at the sticks. Up front, the Saints bust through the line and force Brady to go to his hot read. The ball falls harmlessly to the turf, and the Bucs have a three and out to start the game.

Once again the Buccaneers try going over the top to Godwin off of play action, but Godwin and Brady get their wires crossed as Godwin stops his route. The Saints rush four on the play and drop two linebackers. David Onyemata gets pressure up the middle this time, while Jordan once against ends up with a hand in Brady’s face. The Saints ability to get pressure with four pass rushers is a theme in this game, and it pays off against here.

After a hold set the Bucs back, they tried to pick some yardage up by spreading the field. The Saints sit back in a Cover 2 defense, and Marshon Lattimore and Jenkins converge on the Jones curl route very quickly. The Saints only rush three on the play, and they don’t get much pressure, but by this point the message is clear: Brady is getting rattled early on. Had he surveyed the field longer, it’s possible he could have found intermediate soft spots in the zone coverage, namely Evans (running the dig at the top of the screen) and Antonio Brown (running a post from the bottom).

The entire Buccaneer offense is predicated on staying ahead of the sticks, and when you get third and long, you get these playcalls. The Bucs run a quick swing route to Jones, who is immediately brought down by Lattimore (bonus points for Gardner-Johnson mixing it up with Brown and Evans after the play). The Saints force their second consecutive punt, and on this play it was because the Buccaneers don’t think their offensive line could hold back the pass rush long enough to let a bigger route develop.

Immediately after Jared Cook’s fumble, it looked like the Buccaneers might be able to find a little momentum. However, they still had 98 yards to go against a defense that had given them nothing. That continues on this play. The Saints maintain their gaps on the Jones run, and AGAIN it’s Jenkins in to make the play. He had an absolutely monstrous first quarter on Sunday.

2nd and 8: Incomplete to Antonio Brown

This is a terrific drop-off from Janoris Jenkins. With a receiver coming in motion, he picks up Brown coming out of the slot. The Saints are dropping their corners into deep coverage on this play, while Marcus Williams comes down to help in the slot. In the pocket, Brady looks more like himself. He’s patient, climbs the pocket, and is finally able to take a legitimate shot down the field. J. Jenkins just makes an outstanding play in coverage to break up the pass.

One thing to note: This play easily could have ended in a blown coverage if J. Jenkins hadn’t read it so well. It actually looks like Williams was supposed to be a robber, while Malcolm Jenkins was supposed to be over the top. There’s a brief moment where M. Jenkins looks like he panics as Brady releases the ball. Whether that’s the case or not, it’s an outstanding defensive breakup from J. Jenkins.

3rd and 8: Incomplete to Rob Gronkowski

If Jenkins did blow the previous play, he makes up for it in spades here. Once again, he takes a great angle on the Gronkowski out route to make the throw too difficult for Brady. To make matters worse for the Bucs, Onyemata blows up the play on the inside, forcing him to throw it at the sticks. The result is an incompletion and the third consecutive three and out for the Buccaneers, despite a promising turnover keeping them within one possession early.

1st and 10: Incomplete to Scott Miller

At this point, it’s evident that the Buccaneers are digging deep. The Saints look to be running a hybrid defense of man to man on the outside and zone over the middle. But the most important think to look at is Evans from the slot. See him? He’s the one running for a touchdown down the seam with his arm up. Instead, Brady throws it to Scott Miller on the sideline, who is shoved out by J. Jenkins for an incompletion.

This is true of every QB, but it’s especially true of Brady: If you can rush them with four, you can rattle them. The Saints pass rush isn’t overpowering on this play, but Brady never comes off of his first read. If he does, he has Williams sleeping at the wheel for an easy touchdown. If a quarterback doesn’t go through his progressions early, he won’t do it even if there’s time to do it. Nevertheless, the Saints need to clean this up, because someone messed up on this play.

2nd and 10: Complete to Chris Godwin for 7 yards

On yet another quick route, the Saints rush three and drop Malcolm Roach back into coverage. He picks up Godwin alongside Gardner-Johnson, after Brady and Godwin find a weak spot in the Saints zone on a levels route alongside Evans. With the Saints dropping eight, this is really all that was available to Brady.

3rd and 3: Incomplete to Scott Miller

Once again, we see Brady out of sync with his receiver. Miller breaks off of his route against Jenkins, and Brady overthrows him. The Saints blow the play up inside with big pressure up the middle, and Brady is forced to throw from a collapsing pocket. The result is yet another incompletion, and yet another three and out.

The next drive, of course, resulted in the first first down of the game for the Buccaneers, immediately followed by an interception. It took the Buccaneers four possessions to get past the sticks, in an utterly dominant defensive performance.

The TL;DR version of all of this is that the Saints came in with the perfect Brady-killer of a gameplan. They rushed four from different spots, they mixed up their coverages, and they were physical with receivers on timing routes. The utter refusal from Bruce Arians to run the ball didn’t hurt either.

While this game shouldn’t be treated as a full-blown exposure, it definitely highlighted a weak spot on the Buccaneers offense: The offensive line. Brady’s average time to throw this year is actually fairly high, at 2.64 seconds. He has nine intended air yards per pass. The Saints messed with that timing without giving up checkdowns, making his life difficult, and the Buccaneer offensive line — particularly the interior line — was powerless to stop it.

The takeaway could be that the Buccaneers had a really off night, but the Saints defense seems to be finding its groove. If Malcolm Jenkins can keep covering tight ends and the Saints can keep finding pressure, they’re going to keep building on this 6-2 record.

Things look exciting for the rest of the season, but there’s still plenty left to do. Despite this rout, the Saints now need to turn their attention forward. They’re in the driver’s seat in the NFC South now. There’s no doubt they want it to stay that way moving forward.