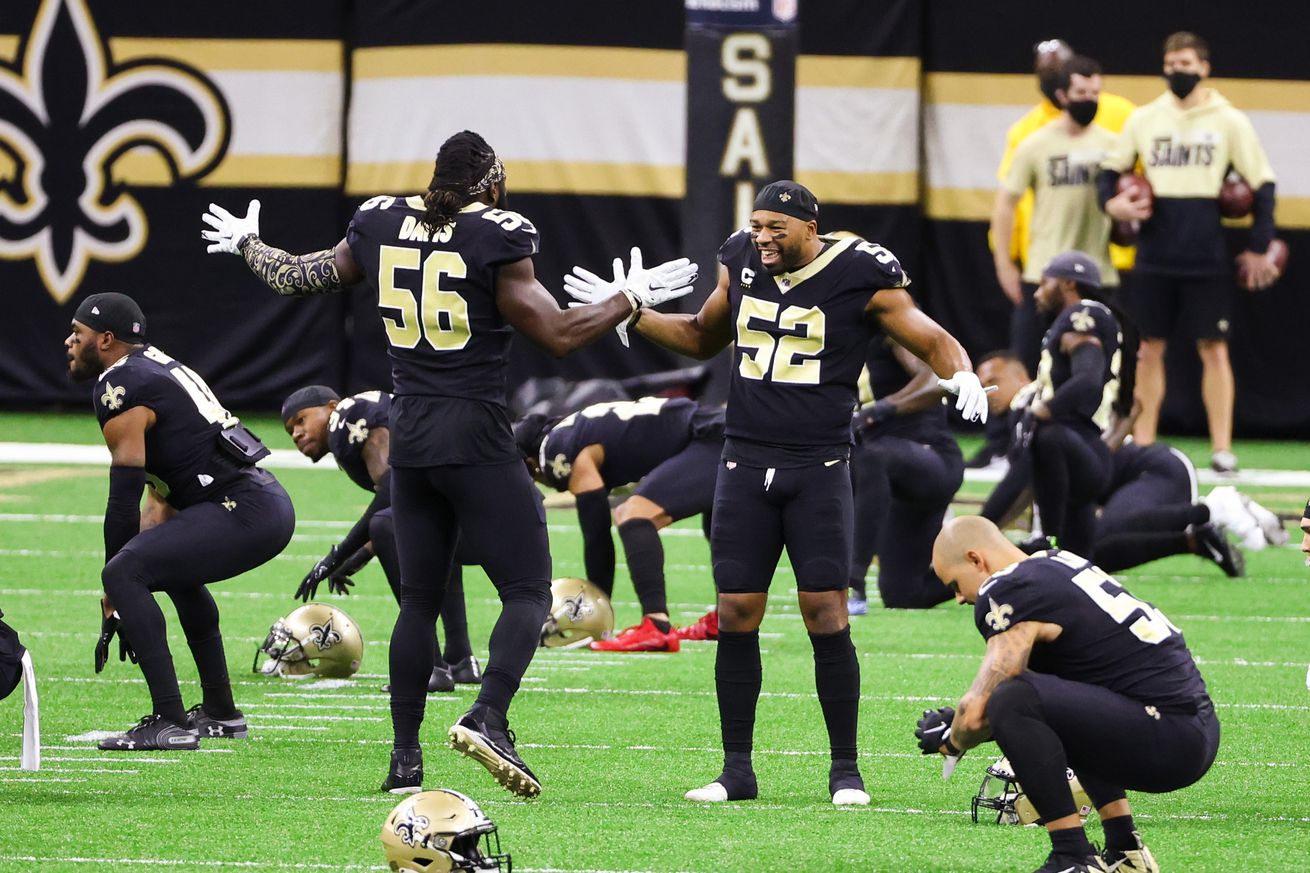 It absolutely cannot be overstated at this point. Do not run up the middle on the New Orleams Saints. You may try. You will fail. It is written.

The Carolina Panthers didn’t run the ball much when they visited the New Orleans Saints in the Superdome this past Sunday, only 12 designed runs in the entire game (basically runs that aren’t scrambles) for a total of 27 yards. While Matt Rule spent most of his time comfortable letting Teddy Bridgewater air the ball out (rightfully I might add), when he tried to run the ball his team was fairly unsuccessful. So unsuccessful, in fact, that 23 of the 27 yards the Panthers gained on the ground came after contact. The Saints defense was all over the Panthers running attack, one that, even without Christian McCaffrey, was still performing well in his absence. The Panthers even tried to hit the Saints run defense in their Achilles heel, on the outside. Here’s how that went.

That was the Panthers attempting to run an outside zone. That was also Sheldon Rankins obliterating the Panthers’ left tackle and blowing poor, helpless Mike Davis up before he could do anything about it. That was just one of the stellar plays that Rankins made this past weekend, a game in which he earned an 89.9 run defense grade from Pro Football Focus, the 2nd-highest run defense grade in the NFL last week. While Rankins has certainly had a down year and could find himself searching for a new team come March, the Louisville product performed well enough against Carolina to warrant any and all praise.

While David Onyemata wasn’t the one to finish off this play, this run stop by the Saints defense was made entirely possible by his explosive jump off the line at the snap, forcing Mike Davis to bounce outside where he’s met by a waiting Janoris Jenkins and Alex Anzalone. These are the stereotypical “plays that don’t show up in the box score”, because while Anzalone gets (rightful) credit for this tackle, Onyemata, in the midst of the best year of his career, made this play.

Demario Davis rules y’all. Again, Davis wasn’t the one to make this tackle. However he does jump into the hole that Mike Davis is supposed to run into and forces Davis to cut back, where he’s met by Cameron Jordan for a gain of just one on first down and immediately putting the Panthers in the hole offensively. Team plays like this make a good rushing defense. One person “overshoots his gap” and cuts off half the field for one of his teammates to make the play.

This coming week the Saints find themselves up against the Chicago Bears, a team that’s near the bottom of near every major statistical category when it comes to actually running the ball. Props to Matt Nagy though, he knows rushing is not his team’s strength, so he does not try to force it (though, to be fair, you don’t run the ball too much when you have the best quarterback room in the NFL)

As a team, the Bears find themselves with the most rushing success when they run up the middle, averaging 4.3 yards per carry when rushing up the middle compared to 2.6 yards per carry when running to the outside. We’ve seen teams like this try to impose their rushing wills on the Saints before, most notably the Green Bay Packers, and we’ve seen them fail, and the Packers are a far better running team than the Bears are. With the way the Saints run defense has been playing, expect the Bears to try and air the ball out more, and expect the Saints defense’s 100-yard rusher streak to continue.