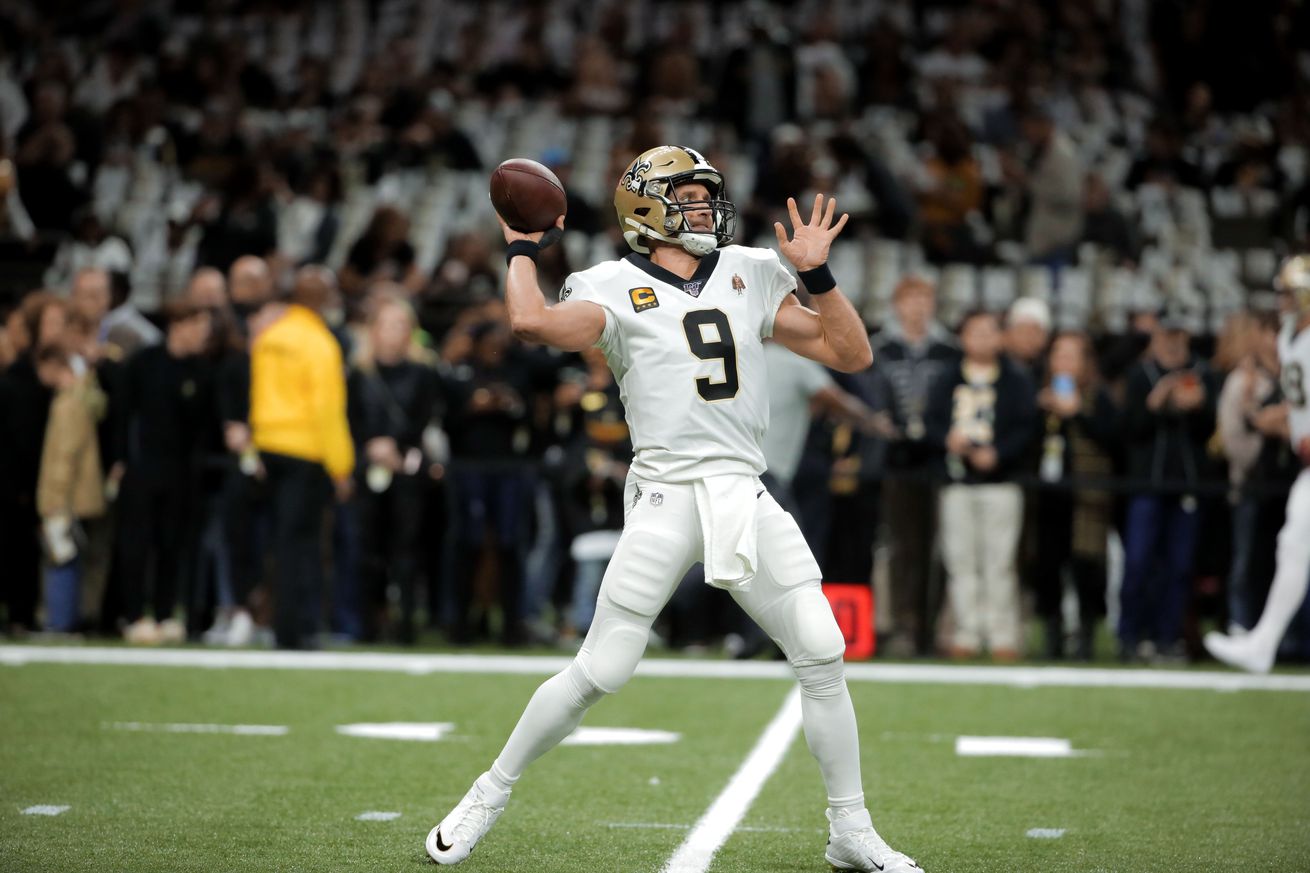 The Week 1 matchup between the New Orleans Saints and the Tampa Bay Buccaneers is sure to be one of the — if not the — top showdowns on the Sunday slate of games.

Drew Brees vs. Tom Brady will be the headline, and deservedly so. But what I’m most interested to see is how the Saints attack the Bucs’ aggressive defense through the air.

Based on the tendencies of Defensive Coordinator Todd Bowles-led defenses, I see a lot of ways Sean Payton and Brees can do so.

Here’s some of what I’d expect to see from them come 3:25 p.m. Central Time on Sunday:

Bowles’s defenses are always near the top of the league in two things: Blitz Cover 0 rate and Cover 1 rate.

What we’re going to focus on for now is the Cover 1 part.

In a league where most teams are Cover 3-heavy, the Bucs actually ran over 10 percent more Cover 1 man than Cover 3 last year, via PFF.

There are various ways to play this coverage — with double teams on a receiver, with a QB spy, etc. — but the underlying theme is Bowles forces his corners to play lots of man coverage. Most of the time, they’re doing so with the help of a one-high safety.

So what the Saints have done a ton of in their past two games against the Bucs is run a good bit of fades, corners and out-breaking routes to avoid the middle-of-the-field safety.

This is a beautiful rub-concept with Michael Thomas running a wheel route from the slot. The Bucs are in a man/one-high safety look, and the two outside receivers run what are basically pick routes to pick off the slot defender covering Thomas.

An important thing to know about Cover 1 defense is the rules corners adhere to. There are landmarks all over the field that determine if they should have outside or inside leverage on the receiver.

You would think the corner should always keep outside contain, considering they have safety help, but in reality, if the receiver makes it to a certain point where they’re nearing the sideline, the corner has to treat the sideline like a defender and play inside.

In this instance, the corner is supposed to keep outside leverage until the receiver makes it to the outside of the numbers, where he should switch inside and force the receiver to make a play between he and the sideline.

But here, he gets picked off before he can get inside MT’s hip pocket, and it’s a wide open TD away from the safety.

Sean Payton and Drew Brees know how to use these landmarks against defenders to get their receivers favorable looks.

If the Bucs aren’t going to double Thomas, he’ll feast on the one-on-one matchups outside all game from looks like this.

But if they do decide to double him — and Alvin Kamara, as they do on the following play — Jared Cook and Emmanuel Sanders are going to be singled up with favorable matchups all game.

Brees will just have to hit on these opportunities, unlike Teddy Bridgewater here:

Cook is more than capable of taking advantage of size mismatches with safeties and slot corners, and he’s too quick/athletic for linebackers.

And Emmanuel Sanders can cook up just about anyone in single coverage, as I wrote about a while back.

While an offense would ideally like to be able to hit on throws in the middle of the field, the Saints have the horses to make these tougher throws and catches to the outside look easy when the defense dictates that look.

Watch out for rookie safety Antoine Winfield Jr., who was an absolute ball hawk in college at Minnesota, with seven picks his senior year. He might be the single-high safety on some these looks.

The Bucs also have a couple under-the-radar corners who are sneaky not-that-bad.

Carlton Davis led all defenders in pass break-ups by a wide margin, with 18, according to PFF. He also allowed a stingy 52.4 percent of passes targeted his way to be caught, but he did tie for the league-lead in penalties among corners.

Jamel Dean was also good in limited snaps, allowing a catch rate under 50 percent and breaking up 10 passes in just 285 coverage snaps.

These guys won’t be stopping MT one-on-one or anything, but they are more of a challenge than advertised.

Todd Bowles loves to blitz. The Bucs blitzed at the sixth-highest rate in the league last year, and in his tenure with the Jets, they blitzed more than any team.

Therefore, he loves to leave his coverage players on islands. For this reason, if there’s one quarterback you typically don’t want to blitz, it’s Brees.

He’s not going to get flustered. He’s going to have his pre-determined hot route ready, and he’s simply going to get the ball out of his hands quickly.

If they insist on blitzing Brees Sunday, it’s at their own risk.

Also, this will provide Sean Payton with plenty of opportunities to run those screen passes he loves. He’ll just have to feel out when he thinks a blitz is coming to dial up the screen at the right time.

In Week 5 last year, he tried to do so with that random little Josh Hill screen he’ll drop in every few games or so, and he guessed wrong.

If he guesses right, this, or a screen to one of the running backs, could go for a big gain Sunday.

The only concern I currently have is the interior of the offensive line holding up against blitzes and stunts on these plays, considering there have been a couple injuries there and the experience is limited.

With pass rushers Like Shaquil Barrett and Vita Vea on the Bucs defensive line, it’s important to stay disciplined and upright on the O line.

But if they can hold up, expect the Saints to come away with chunk plays against the blitz.

I could probably just include this one every week until the end of time.

Brees, Kamara and Thomas are machines at the option route. Against man, zone, it doesn’t matter. When they want a few quick yards on long early downs or short late downs, they will call on this play.

Now the Bucs do have arguably the best coverage linebacker in the league in Lavonte David, who had by far the best PFF coverage grade in the league among LBs last year, at 91.1.

If Kamara is matched up with him, it won’t be an easy matchup. But any of the other Bucs LBs? Time to feast.

Against zone, you have an extra choice, which is just sitting in the vacated zone between defenders if no one commits to you.

The Bucs run a lot of Cover 4 coverage, with four deep defenders and only three underneath. If they do that often on Sunday, Brees is just going to gash them underneath with this stuff all game.

Jared Cook started to run the option route a bit last year as well, and was pretty good at it. I would expect Sanders to do so this upcoming season too, giving the Saints four legitimate threats to win individual matchups with this concept at any given time.

On this play, they ran it with Cook vs the curl/hook defender in the Bucs Cover 2 Zone scheme:

He gets hit and drops it, but there was a penalty for helmet-to-helmet contact. That’s not the point though. The point is to notice the flat defender poaching to make this hit, and how Bridgewater capitalized on an underneath defender’s lack of depth later on after seeing this.

When the Bucs do play zone, one of their most-used coverages is Cover 6, with the sixth-highest rate last season.

In this coverage, you’re basically playing Cover 4 on one side of the field and Cover 2 on the other side. The Cover 4 side is typically putting two deep defenders on the strong side with more receivers, while the backside is usually the Cover 2 side with one safety.

There’s only one problem with this, if you’re Todd Bowles and the Bucs. The Saints love putting Mike Thomas and Kamara on the weak side, which puts your weak-side flat defender in a pickle, if they’re vertically stretching him with their routes.

So late in the third quarter the Saints do just that. First, they recognize the look.

There are two deep defenders on the strong side (right side) and only one on the weak side. Given the tendencies of the Bucs defense, it’s a safe bet to assume they’ll be in Cover 6 if this is the look.

So, what do they Saints do? They Hi-Lo this underneath defender with a Smash-like concept.

The flat defender, Sean Murphy-Bunting (#26), sees Thomas run past him but also sees Kamara getting ready to run the option route. He eyeballs it, and allows MT to get a good bit of depth behind him.

MT sizes up the safety and breaks for a sharp turn on the corner route. Teddy B gives him a beautiful ball right behind the corner’s head for a conversion on third-and-10.

Murphy-Bunting had no business eyeing the option route this hard on third-and-long, but it gets called and thrown so many times, sometimes corners just can’t help themselves.

If Bowles continues to call this coverage, watch that weak side for similar play calls om Sunday.

On paper, I don’t see a way the Bucs really stop Brees and this Saints offense. They don’t have the personnel or a favorable scheme to do so, but then again, not many people do.

As long as they don’t turn the ball over a ton, the weapons and continuity of this unit should prevail.

This is the primary reason I’ve picked the Saints to win this game outright, as well as cover their -3.5 spread. Because let’s be honest: People can talk as much as they want about defense and the running game — as those things are definitely important — but what has won the New Orleans Saints football games in the Drew Brees/Sean Payton era is and has always been their passing attack.

I’d expect that to hold true on Sunday, against a defense they’re very familiar with.