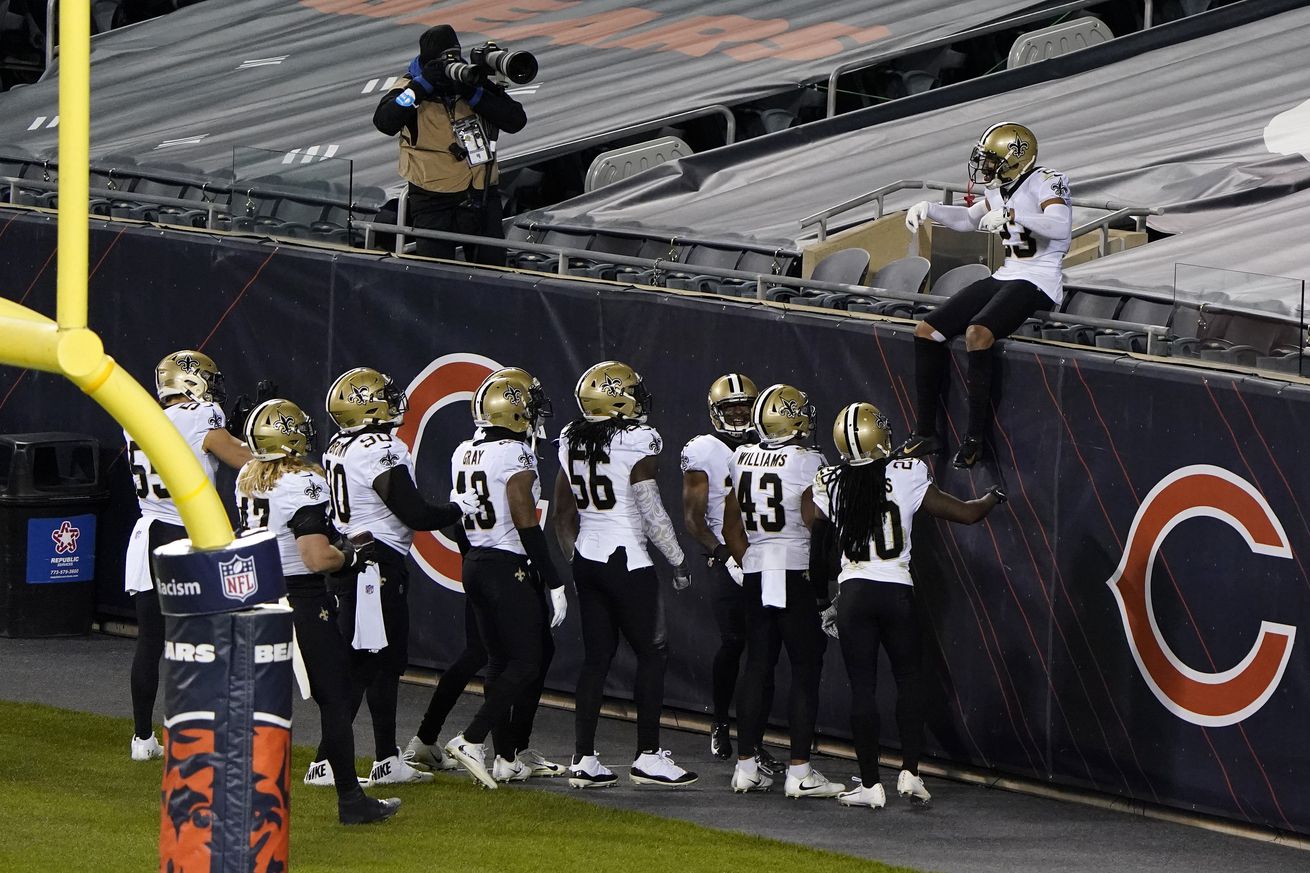 Saints start the game with the ball. 8 plays in and we’ve seen nothing but runs and short passes. That will be the plan today without 3 of the receivers that the Saints would normally have. A Kamara 20 yard run gets them right outside of the redzone. Wil Lutz’s field goal is good after the offense got stuffed at the 20. NO 3 – CHI 0.

Touchback. Former Tulane star Darnell Mooney gets his first yards of the game. Bears quickly to midfield. An incomplete pass was called a fumble for some reason, but after they review it, it’s reversed. As it should have been. CJGJ falls and allows Anthony Miller the 1st down catch on 3rd down. A wild Mitch Trubisky comes in for a Taysom Hill type play, a run for 2 yards. Davenport and Rankins combine on Foles for a sack. Chicago plays safe on 3rd and 20 and just plays for a better field goal attempt. Cairo Santos hits it. NO 3 – CHI 3.

Deonte Harris gets good kickoff return, but a penalty brings it back to the 12. Kamara gets the catch with wide open green in front of him and brings it for a 48 yard gain. Kamara doing whatever he wants, after a catch and then running around the defender he gets another first. Taysom Hill gets the Saints into the redzone. Wil Lutz coming back on the field. It’s no good. Still a 3-3 game.

Drive starts at the 20. Darnell Mooney beats Jenkins for a gain of 50. Two plays later Allen Robinson beats Lattimore for a 24 yard TD catch. That was quick. CHI 10 – NO 3.

Harris gets the ball to the 22. Smith was open but the throw was short on the first play. Underthrow deep to Smith. 3 and out for the Saints.

Drive starts at the 37. WR screen to Patterson loses the Bears 4 after Lattimore sniffs it out. Bears with their own 3 and out.

Drive starts at the 14. Yet another 3rd and out. Thanks for nothing Tommylee Lewis.

Drive starts at the 39. Montgomery with a 38 yard run on 3rd and 1. Sheldon Rankins hurt on the play. Saints defense able to hold them to a field goal despite the big play. CHI 13 – NO 3.

Saints start at the 32. Jared Cook appears and gets 11 on the first play. 1:28 left in the half. Brees fumbles the ball but jumps on it. 2nd and 18. Kamara short of the 1st by a yard. Saints look to be going for it on 4th and 1 at midfield. Big play. Kamara gets the first on a toss. 28 seconds left with the ball in Chicago territory now. Quick pass to Smith caught and he gets out of bounds. Kamara gets 8 and gets out of bounds. 18 seconds left. DPI flag on Fuller, ball moves to the 16. Cook was open in the endzone, but Brees threw it behind him. Cook gets it now on the soft coverage, TD Saints with 3 seconds left. CHI 13 – NO 10.

.@DrewBrees to @JaredCook89 for the TD!

The #Saints close the gap before the half.

Kickoff is brought back to the 13. Bears ball. Delay of game on 3rd down. 3rd and 9 now. Demario Davis bursts through and almost gets a strip sack. Malcolm Jenkins through to clean it up. False start on the punt has the Bears punting out of their endzone.

Deonte Harris gets a 42 yard punt return to get the Saints half started on the 16. Can’t capitalize on the good position, but it’s not a complete waste after a Wil Lutz field goal. NO 13 – CHI 13.

A good 32 yard return by Patterson will. So after really weird chain of events, the Saints back the Bears up. Javon Wims comes up to CJGJ and punches him out of nowhere. A fight breaks out. Wims is ejected. Lattimore intercepts the ball on the next play!

He just took that punch and then dude just went nuts pic.twitter.com/IChZVvbxjn

Saints ball at the 39. A bunch of short yardage plays. Saints convert a 4th down. Not much after that. Wil Lutz hits a 39 yard field goal to give the Saints the lead. NO 16 – CHI 13.

3 and out for the Bears on the next drive.

Another good return for Harris gets the Saints started at the 50. Smith is just short of the 1st. 4th down try is no good this time. Bears ball.

Touchback starts the must score drive for the Bears. Bears start with a couple of quick plays. Big gain by Allen Robinson for 28. 3rd and 12 now after back to back unsuccessful plays. A big DPI on Davis in the endzone sets the Bears up 1st and goal at the 1. TD catch for Darnell Mooney. NO 23 – CHI 20

Bears defense comes up and causes a 3 and out. Bears will get the ball back after the two minute warning.

Looked like it was going to be a quick drive after what originally appeared to be a fumble is called forward progress. 4th and 8 now. Miller wide open for a gain of 11. The Bears are letting this clock DRAIN. 4th and 2 with 38 seconds left is converted. Bears just out of field goal range. Cam Jordan with the clutch sack and a loss of 9. Final timeout called by the Saints. Cairo Santos on to attempt the 51 yard field goal. It is good. NO 23 – CHI 23.

Saints take a knee and it will bring us to overtime.

Saints win the toss. Touchback. Austin Carr gets the first nod. Then it’s Cook. QB Sneak by Brees is good for 3 and a first down. Kamara’s good gain is brought back on a hold by TQS. 1st and 12 at the NO 45 now. Roquan Smith making his presence known on this drive. 3rd and 12 now after the near interception. Saints almost get the 1st with Taysom. Saints try to draw the Bears offsides. Looks like they will punt now.

Bears start at the 19. Onyemata with a huge sack on 2nd down. Allen Robinson converts the long 3rd down. Cam Jordan gets to Foles quickly and forces him to throw a bad pass. Marshon get the hit on Graham, but it was going to be a drop either way. 3rd and 10 now. Foles forced to run around in the pocket. Cam Jordan pressure, and then Hendrickson and Davenport chase him down for the sack.

Saints start at the CHI 32. 3:48 left. Taysom Hill with 10 yards and a first down. Near interception by Eddie Jackson. TQS with a huge catch, just inside field goal range. Two minute warning. Kamara gets 20 on the outside run. Field goal is good! Saints win!